One of the big issues that a lot of people had about the early goings of #GamerGate – even before it was a hashtag and was labeled as the Quinnspiracy – was all the censorship surrounding the discussion of ethics in games journalism. There were a lot of questions as to why the moderators and administrators from Reddit were so intent on shutting down the discussion centering around Nathan Grayson’s indiscretions. According to one of the moderators, every single comment in the thread was in violation of the rules.

Another Modtalk leak happened courtesy of former /r/Games moderator, Xavier Mendel. Following up on the last leak, a few more details and information regarding what happened across the gaming and news sub-Reddit threads were released.

The particular thread isn’t named, but it obviously wasn’t the giant 24,445 comment thread about TotalBiscuit’s Twitlonger that was nuked six months ago. You can check that thread out right here. 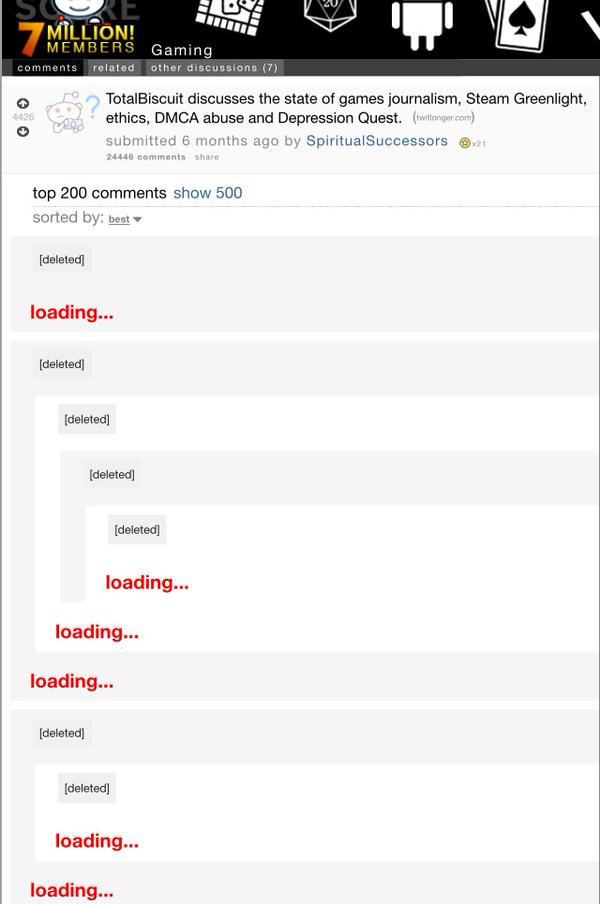 The other thread in question had 117 comments and was in /r/gaming, making its way up the chain fast toward the front page of Reddit. According to moderator IkingJeremy, on August 20th, 2014, when another mod asked him about the thread completely being nuked, IkingJeremy responded saying…

“We decided that we couldn’t keep up with it, as it was making it’s way up to the front page so we decided to lock it down.” … “We were concerned that we would not be able to remove doxxing info fast enough, and so far ALL the comments were in violation of the rules anyway.”

Interestingly enough, Modtalk dump also confirms that Zoe Quinn and /r/gaming moderator el_cupacupcake did have a Twitter conversation that resulted in an /r/gaming submission being nuked as well. It’s discussed in the image below.

As you can see, former Reddit administrator and current /r/Games moderator, nalixor defends el_cupacupcake’s decision to discuss the matter via Twitter while moderator fritzly felt that the matter should have been handled in private.

For those who don’t want to click through the image, nalixor states… 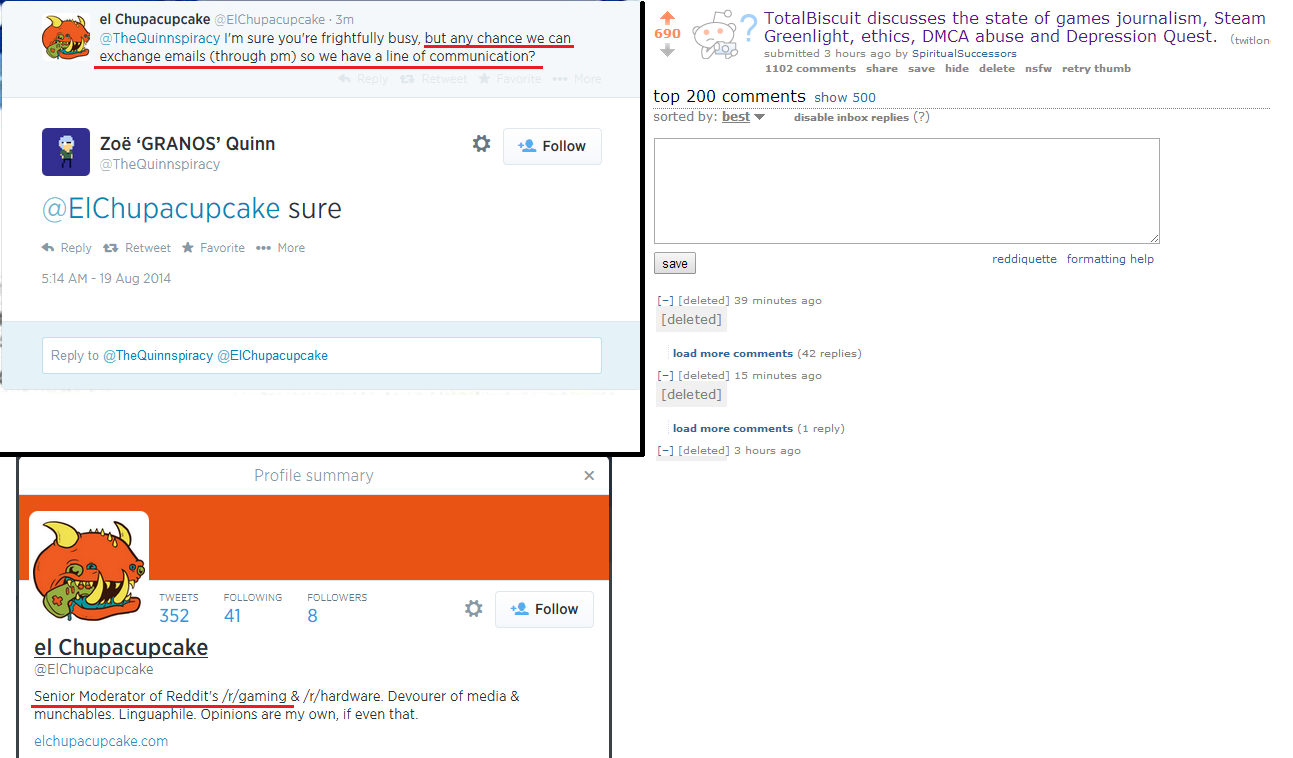 When Piemonkey points out that people made the connection that el_cupacupcake and Quinn had a close enough relationship for Quinn to get the threads pulled, Nalixor blames it on the gamers from /r/gaming and 4chan, saying…

Another image does reveal el_cupacupcake noting he did have conversations with Quinn regarding the censorship of early #GamerGate material.

“the only possible problem would be if Zoe Quinn used sex to get people to write about her but the Kotaku/RPS writer never wrote anything about Depression Quest ever on either website.”

Nathan Grayson wrote about Zoe Quinn and Depression Quest on January 8th, 2014 at Rock, Paper, Shotgun and again on March 31st, 2014 at Kotaku. You can read up about more of Nathan Grayson’s indiscretions in the encyclopedia of Ben Kuchera and the GJP’s cronyism.

The idea that gamers feared that certain individuals had the ears of higher-ups at Reddit – and used their influence to shutdown discussion and censor topics such as those concerning corruption in the gaming industry – have had their fears proven true.

Only one moderator actually brought out the issue that #GamerGate has been fighting for the past six months. A mod of a bunch of eco-porn sub-Reddit forums, Gaget, stated that…

“You know who I’m disappointed with? Reddit. Also these reviewers. I’m ticked at the guys who don’t have any journalistic integrity. But you know what? Game journalism hasn’t had any integrity since fucking nintendo power.”

You can check out the full conversation in the image below. 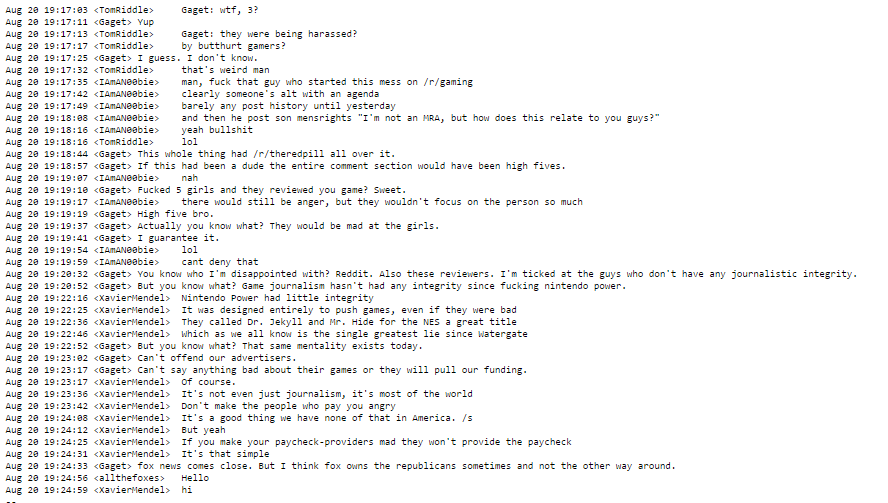 Some of the mods in the /r/pcgaming hub rebelled somewhat, allowing the discussion to continue to pop up. You can check out the image below of the conversation from August 31st, 2014.

Nevertheless, this made nalixor livid, stating…

“sounds like a shit sub.” … “I guess [the mod’s] heavily aligned with the MRA side of reddit.”

Gaget, once again, being one of reason, mentioned that the mod supporting the discussion was not a Men’s Right Activist.

“He just thinks we can’t keep it from coming up and is trying to avoid drama. He just wants things to go back to normal.”

In a way, letting people air their grievances so things can cool down is usually the best course of action. However, nalixor vehemently disagreed, snapping back at Gaget, stating…

“so he’s a fucking coward[,] that’s probably worse[,] when shit got hard, we fucking rallied and we came through it with the best reputation out of anywhere it erupted, IMO.”

Actually, /r/Games has one of the worst reputations as far as censorship goes in relation to the #GamerGate discussion. In fact, there are threads all over Reddit about the heavy hand of censorship from /r/Games mods, such as the post here on /r/Conspiracy, one on /r/gaming, and quite naturally, a few choice posts on Kotaku in Action. Again, those are just a few from a two second Google search.

Later on, IamAN00bie and ForestL lament some of the mods from /r/videos for not taking down some of the Quinnspiracy videos from the Internet Aristocrat. As noted in the image below.

The context is that they wanted Internet Aristocrat’s videos off Reddit. ForestL suggest to send the mods from /r/videos a modmail to have the videos removed, to which IamAn00bie responds…

“lol implying they’ll give a shit[,] they [sic] last response about it was “we’re the only free speech sub that won’t remove it!”

The mod IamAN00bie searched out a 4chan thread on /v/ to find a few users saying to upvote the Quinnspiracy videos, which prompts ForestL to say “it was auto-removed”.

But it’s not like this is just an issue with /r/Games or /r/gaming. The Mod Talk leaks also reveal that some moderators have been dropping censorship hammers for a while in various sub-Reddit threads, especially in the news and politics section. As the image below reveals, some moderators would completely ban an entire site from Reddit if they didn’t like it.

For those who have trouble reading the quote from the image, GhostlyFalc0n states…

“Don’t take it personally. They banned all kinds of sites and for no other reasons than a few of the mods didn’t like them. The list is huge.”

In this case, we have mods adversely set on silencing all discussion surrounding corruption within the video game and media industry. Hence, the Reddit moderators and some administrators have gone out of their way to censor discussion at all costs, even from some sub-Reddits that they don’t even moderate.

The conspiracy theory that some of the Reddit mods were actively in on an agenda to silence and censor #GamerGate and gaming industry related corruption have been proven right.

You can check out a few more choice bits from the leaks here and here.