The mod logs for Reddit were recently leaked. A lot of the leak mostly confirms what a lot of people already knew: many moderators on Reddit are biased and will censor or halt discussions that go against their perceived world view. Essentially, Reddit is privately owned and has every right to do so, but now people know that the moderators support actively suppressing and hiding information that exposes corruption in the games industry while also allowing websites that partake in said corruption to continue to flourish and grow on Reddit.

There’s an archive file of the giant pastebin of the mod leaks. The mod files were confirmed by one of the moderators, XavierMendel, who discussed the leaks on a YouTube live-stream with a Kotaku in Action moderator, TheHat2. The leaks were further corroborated with links to Reddit moderators BiPolarBear0 and SolarAquarion.

The leaks happened following controversy over Kotaku in Action – a sub-Reddit focusing on #GamerGate and the exposing of corruption in the media industry – when it was named as the “Subreddit of the Day” and mods became furious that moderator XavierMendel would do such a thing. This spawned a lot of discussion amongst gamers, users and Reddit denizens over the fate of Kotaku in Action, which has amassed nearly 30,000 subscribers.

Following the heated topic of KiA being the Subreddit of the Day over on Reddit, the leaks of the mod talks happened, putting all of the behind-the-scenes discussions out there for the public to peruse. This included the backroom talks about censoring users and submissions from discussing #GamerGate.

All of the censorship that happened in the wake of #GamerGate was something that was even discussed in the private mod chat, with theredditpope writing on September 8th, 2014…

“I think what gets people most upset is how Reddit reacts to these situations instead of how they try to prevent them in the first place.”

We also have Reddit moderator hermithome, asking how to completely filter out various words for submissions in the sub-Reddits they moderate, some of which includes /r/IndieGaming, /r/FemmeThoughts/ and /r/WomanPorn, to name a few. Check out the image below where a list of words associated with “#GamerGate, Social Justice Warrior” and “corruption” are set into the filter, where hermithome obviously wants to ensure that people are neither informed nor made aware of some of the shady dealings happening within the electronic entertainment industry. 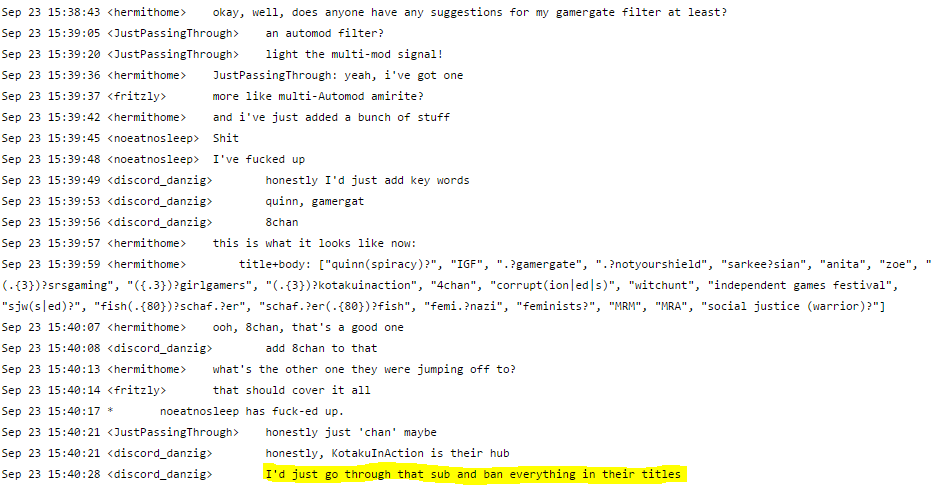 Notice that “corruption” and anything associated with the IGF and Independent Games Festival are included in the filter list. It’s almost as if they don’t want Brandon Boyer’s conflicts of interest made public, even though they’ve already been reported on by TechRaptor and The Ralph Retort.

Hermithome had various words added to the filter for designated sub-Reddits. However, despite censoring the topics and partaking in narrative shifting, hermithome became a regular poster to GamerGhazi and eventually took up modding duties there, pushing propaganda and engaging in the denigration of #GamerGate topics. It’s all evidenced in the image below or you can read it straight from the archived pastebin for yourself.

For those who don’t want to click the image or if you want to make sure that this is indexed good and well on Google and Bing whenever someone types in “Reddit mod corruption GamerGahzi”, here’s the quote below from hermithome…

“ i tried to stay away from the gamergate stuff at first, but now i regularly post to GamerGhazi and conspiratard….its just such awesome potatoes i cant help myself”

Hermithome then tries to convince a moderator of Kotaku in Action to leak the modmail in order to create discord in the KiA community. So not only is active censorship practiced but nefarious acts of subversion was also not above their intentions. 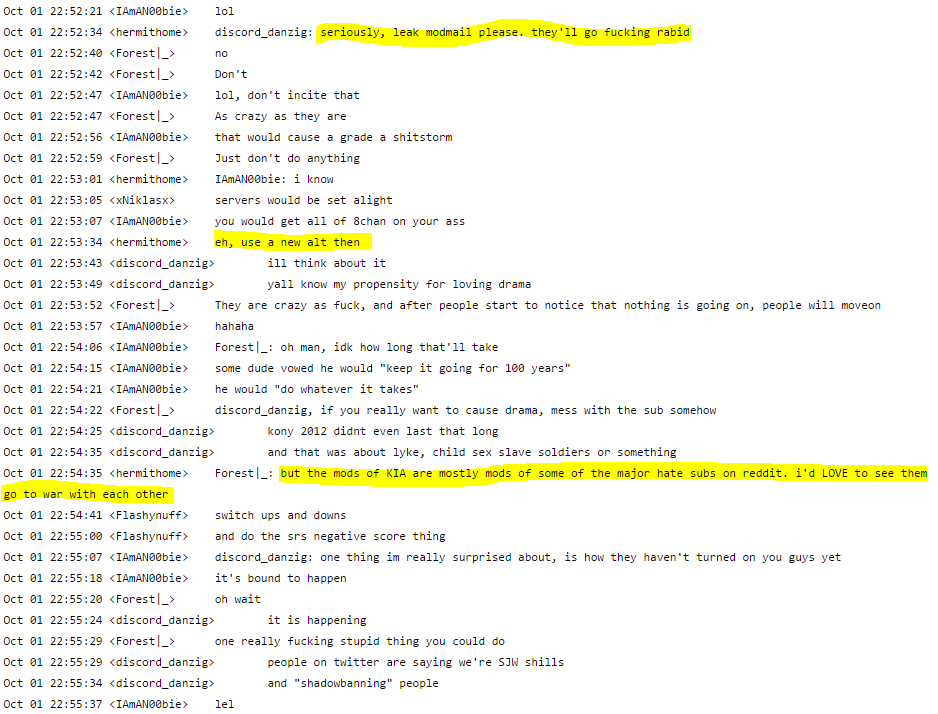 The mods even ridiculed Julian Assange from Wikileaks for siding with #GamerGate over the issues of censorship, with BipolarBear0 stating…

Turns out, Assange was correct, and it was revealed that mainstream media have been actively using their platforms to spin the news and misappropriate information to set a narrative. It appears as if Reddit’s moderators are okay with this, given that they are fine with allowing lots of information across Reddit and the gaming subs about someone like Anita Sarkeesian who has no relevance to gaming news, but are completely against information highlighting websites and institutions that affect the very games we play. Most /r/Games denizens despise the content submitted surrounding the Femfreq drama, yet it’s still regularly allowed.

What’s also interesting is that back on September 8th, 2014 at 15:08, /r/Games moderator Piemonkey complains about Kotaku in Action vote-manipulating /r/Games.

Somehow the allegations about the IGF and chairman Brandon Boyer is just “drama mongering”, even though Kotaku has even admitted to taking interest in investigating the allegations of racketeering.

According to the logs, apparently Piemonkey was the only mod complaining about KiA “vote manipulating” threads.

Moreover, Piemonkey was also the same mod who refused to allow people to post up links or information relating to Dale North’s departure from Destructoid, which involved the alleged blacklisting of Allistair Pinsof by the Game Journo Pros, as recorded in a Reddit thread here.

In an edit to his post, user ChickenOverLord further stated…

“The mod is trying to make it sound like I’m saying people submitted the two links in my post. My replies explaining it have still not been unhidden. I’m not, I’m saying no one bothered to even try because other links on the topic have been instantly deleted over the past two months, such as Breitbart’s leak of the GameJournoPros mailing list a month (if not more) ago.”

Piemonkey’s excuse was that the series of articles exposing the Destructoid corruption case were “opinion pieces” and were therefore not allowed on the thread, as evidenced by the screen-cap of the conversation below.

Speaking of the Breitbart leaks of the Game Journo Pros… the mods also actively sought to suppress and censor that information from making it across Reddit, hiding any attempts to allow people to actively discuss it in the gaming channels and removing all traces of it where they could. As the image below shows, the Reddit moderators did not want the Breitbart news spreading because, as stated by Adagiosummoner…

“freedom of speech is for government institutions.” 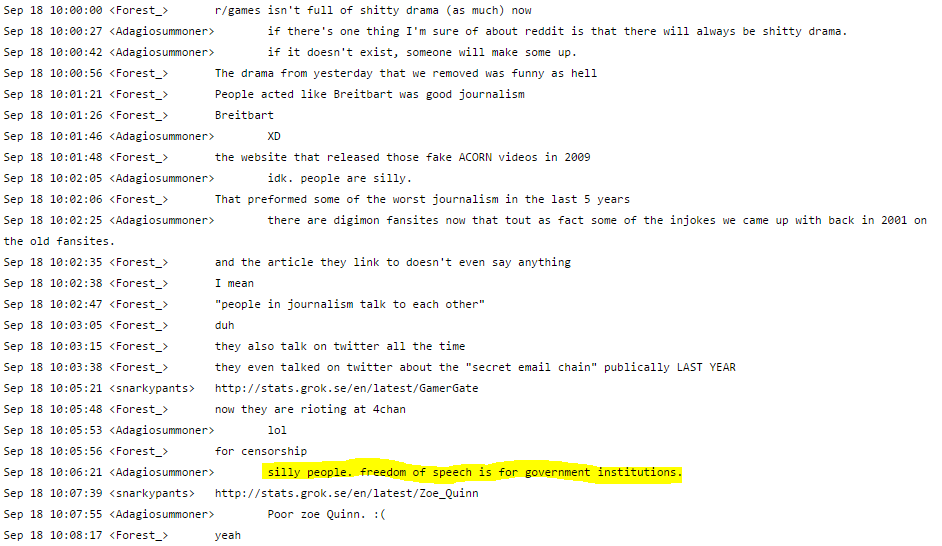 Anyone actively suppressing information detailing corruption after it’s been brought to their attention or for the sake of keeping people from being informed about it, is complicit in covering up corruption. This includes the alleged antitrust violations, cronyism and ethical breaches. 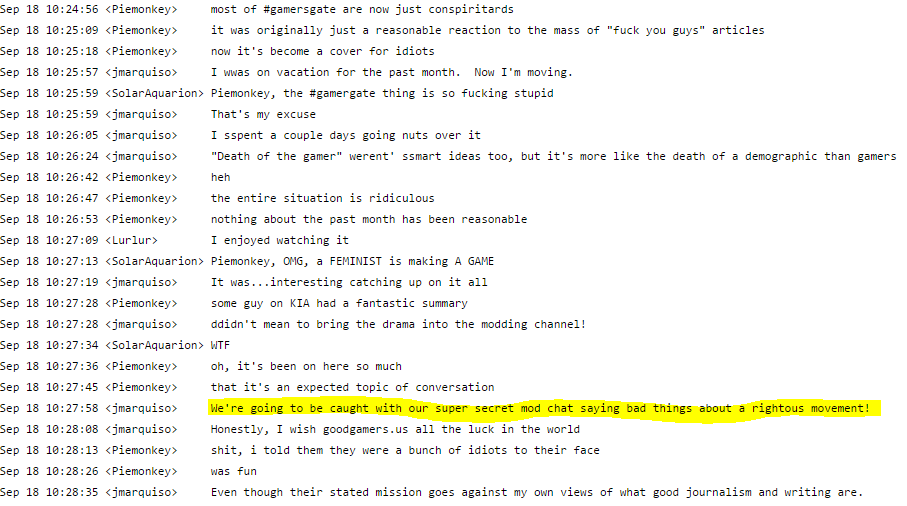 Following the leaks, I immediately reached out to the Reddit PR for a response regarding the leaks and whether or not they have any comments. If they choose to respond I’ll update the article as necessary.

Even still, jmarquiso’s comments are kind of prescient. Something about it keeps bringing me back to Devin Connors’ comment to Kyle Orland in the Game Journo Pro thread, where he said…

It really would be quite funny if this doesn’t end until someone goes to prison.