A new 25 minute video featurette was released focusing on a lot of the different gameplay and special mini-games in the upcoming Senran Kagura: Estival Versus for the PS Vita and PlayStation 4.

Gematsu posted up the video featuring Otaku fan-service culture in full swing. The comment section is full of bustling ebullience as well. You can check out the video below, and it should almost go without saying that all the giant jiggly boobs and clothes-ripping action would make it borderline NSFW.

If you aren’t in a safe spot to watch the video (and the first 15 seconds should give you an idea of just how NSFW some of the content is), the general gist of the video is to showcase some of the hack-and-slash, beat-’em-up action.

At it’s heart, the game is a thousand-army game, similar to Koei Tecmo’s long running Dynasty Warriors series. The enemies are mostly there to work as combat fodder and provide very little in the way of opposition. They’re also there with the concomitant purpose of being stripped down to their underwear every couple of moves. 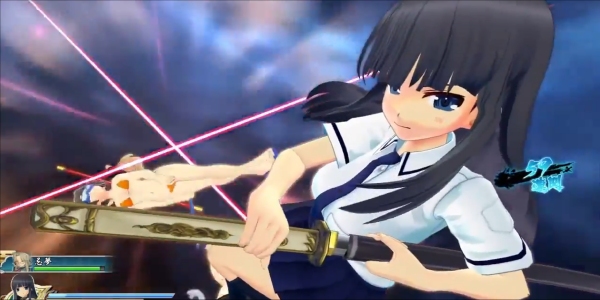 Just by watching some of the gameplay with the special moves and transformations, as well as the physics-enhanced boobs, it’s obvious that the game works hard to earn its mature rating.

Funnily enough, the actual fighting in the game is actually kind of solid, and beyond the ridiculously over-the-top fan-service, there’s actually a solid beat-’em-up title tucked underneath all that visually distracting (or titillating) cleavage.

Senran Kagura: Estival Versus is due for release on March 26th for the PS4 and PS Vita. You can learn more or import the game by paying a visit to the Play Asia website.