CBC Ombusdman Pierre Tourangeau just released a full review of the #GamerGate case from a post on the ICI ARTV network on November 17th, 2014 (a subsidiary of the CBC telecommunications service). The review concludes that the ICI ARTV post did not breach journalistic standards, but the Ombudsman admits that certain topics relating to #GamerGate have been misrepresented in the post based on false information.

The original review went up on July 23rd, 2015 [backup] on the CBC Radio Canada website for the Ombudsman. A rough translation of the post was made on Kotaku in Action by user Mug33k, and user Lunar Archivist offers a series of French-to-English translation of the the review via machine and some manual translation.

The review is quite lengthy but a few noteworthy segments includes Ombudsman Tourangeau’s attempt to downplay journalistic impropriety. Tourangeau writes…

“One of the men named by Gjoni in The Zoe Post, Nathan Grayson, is a journalist specializing in the gaming industry who writes for the web journal Kotaku. This was sufficient for Quinn to be accused of exchanging sex for positive press and Grayson of engaging in conflicts of interest, regardless of the fact that the article in which he barely mentions Depression Quest was written before the start of his alleged relationship with Quinn.”

Irrelevant. The appearance of a clear conflict of interest based on previous comments and actions indicating close ties beyond friendship is enough for disclosure, that’s not to mention the $800 exchange made between the individuals. If an adviser on Obama’s cabinet was sleeping with someone from the Washington Post without disclosure and that journalist covered the presidential political beat, you can bet your bottom dollar they would be fired if that came out in the form of a scandal. Oh, a reporter did lose their job when covering Obama while in a relationship with one of his staff, as reported by Business Insider on June 12th, 2012.

Nevertheless, the Ombudsman dropped a pretty big bombshell in the review of the case brought forward regarding the November, 2014 publication on the ICI ARTV by author Alex Beausoleil, who used the platform to do a hit-piece on #GamerGate.

According to Ombudsman Tourangeau…

“In regards to the first part of [redacted] complaint, specifically his denial that Eron Gjoni ever accused Ms. Zoe Quinn of having “exchanged sexual favors for a positive game review or positive coverage”, I would like to note that Ms. Beausoleil and the management of ICI ARTV admit that “no source supports this statement, as the blogger repeated allegations made by English dailies that were misinterpreted“.

“In addition, the complainant wanted us to identify these “English dailies”, as he was “curious to know who made such allegations”. I do not see how knowing this could contribute to the conversation, as it was the misinterpretation of the journalist that was the cause of the problem and not the “allegations” that she misinterpreted.”

We now have an arbitrator of ethics purely and simply stating that journalists have misrepresented facts in regards to #GamerGate.

However, the CBC has a serious problem if they’re allowed to publish libel without fact-checking.

If their journalists are publishing information for public consumption based on lies or falsities, why are they allowed to continue to do so using sources that misrepresent data?

A thorough investigation should be launched to see if they’ve made these same mistakes on more important issues, especially if they can’t be bothered to fact-check when publishing articles about #GamerGate.

Ombudsman Tourangeau goes on to state…

“It is also not an accident that The Zoe Post served as a pretext for threatening hordes of trolls to launch campaigns of misogynistic insults and threats against Zoe Quinn and other figures from internet gaming that came to her defense, threats of abuse, rape, and even death, no less. Some have suffered cyberattacks against their sites, had their computers were hacked and their personal information stolen. This phenomenon is well documented, and not only in the specialist press.”

Citations needed. The WAM!, report indicated that less than 0.66% of the people on the GG Autoblocker list were reported for alleged harassment. 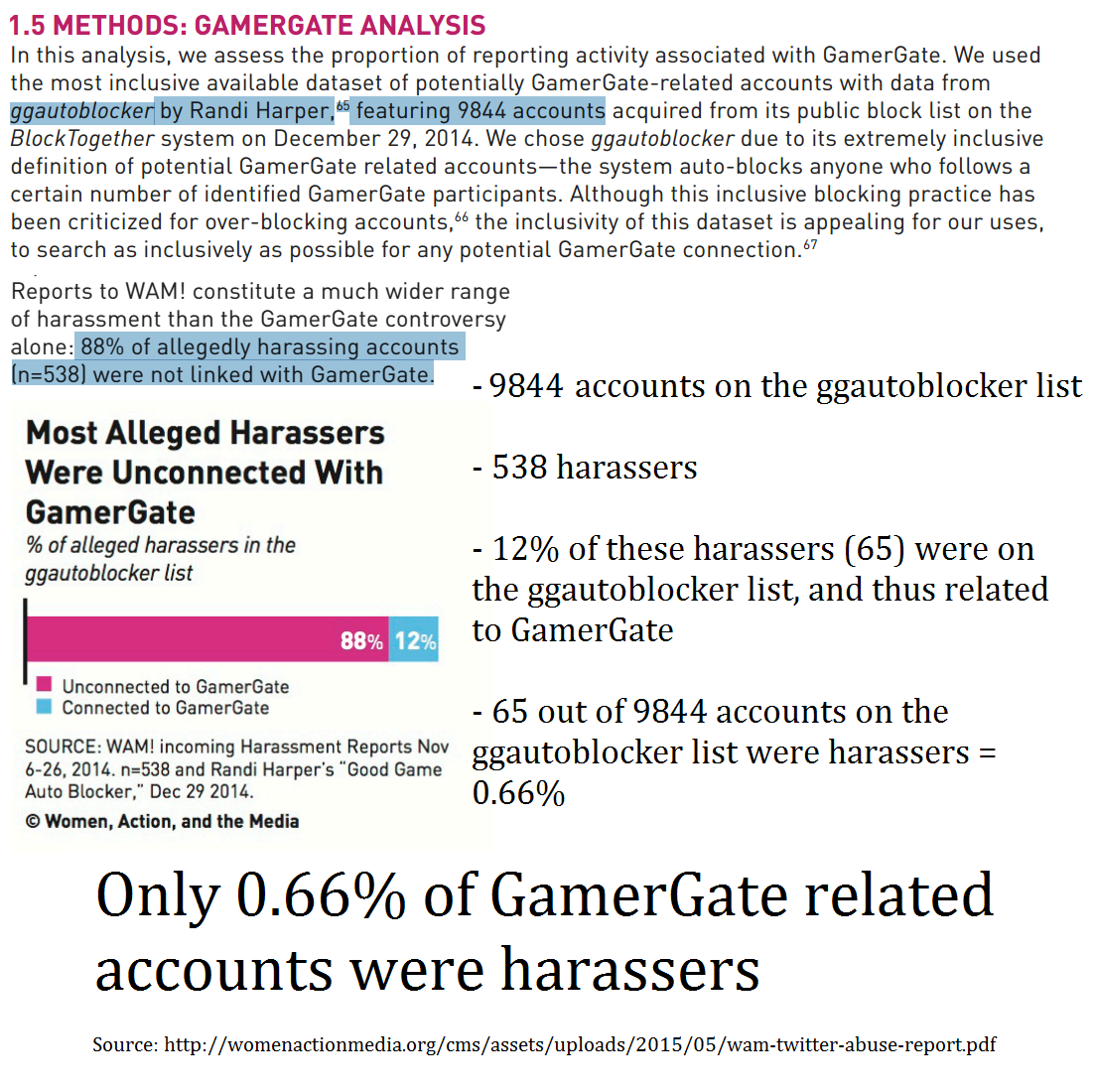 There are documented cases of harassment occurring against people who support ethics in journalism, thanks to Jennifer Medina, a Tumblr page and a post on Kotaku In Action by user CheckYourFactz. Some of the posts allege that various individuals have lost their jobs in result of supporting #GamerGate. If the CBC can provide sourced citations for the claims that the Ombudsman about #GamerGate being about cyber-attacks, rape and death threats, I’ll gladly concede to that point. If not, Ombudsman Tourangeau is perpetuating libel.

Nevertheless, Tourangeau resolves to provide no more reviews of CBC’s improper coverage of #GamerGate at the request of the complainant, stating…

“Finally, let me say that this will be the final review that I will do at the request of [redacted] concerning the subject of GamerGate. The Office of the Ombudsman is an independent, self-regulatory body and does not seek to become part of debates which do not concern it, its only relevant consideration being the application of the JSP of Radio-Canada.”

“It is absolutely his right to believe and defend this point of view, but I have no intention of allowing him to repeatedly use the Radio-Canada complaint process and its ombudsman in the crusade he is mounting to prove his claim. I have already stressed this in other reviews made on behalf of other complainants: the ombudsman cannot allow himself to be turned into an instrument and misused in this fashion.”

Basically, he won’t be covering this topic any further because he feels as if the Ombudsman is being misused, even though he himself has admitted that one of the articles on CBC has either purposefully or through sheer journalistic negligence, misused and misappropriated information in reporting.

Thourangeau goes on to state…

“We recognize the consequences of our journalism and our duty of honesty with audiences. We do not hesitate to correct an error, if necessary, or to follow up when a situation changes significantly.

“The complaint made by [redacted] concerned a blog post published on the channel’s website on November 17, 2014 that was not required to comply with the JSP. I thus bear no ill will towards Ms. Alex Beausoleil regarding the inaccuracies admitted to by management in its response to the complainant.”

Basically, the CBC Ombudsman just admitted that misinforming people is okay so long as it’s called a “blog”.

If the CBC actually held standards they would do a follow-up acknowledging all the websites that updated their ethical standards and disclosure policies, as well as the involvement of the FTC further looking into gaming media to enforce proper, federal disclosure standards due to an e-mail campaign by #GamerGate. Heck, they could bring up the fact that the denizens of the hashtag were responsible for numerous charities, as reported by The Escapist, and even funding a feminist campaign known as The Fine Young Capitalist to bring more women into gaming.

It’s no wonder a CBC journalist was recently fired for corruption, and the CBC’s own Ombudsman seemed to play no role in helping uncover that information.

“A blog post about GamerGate published on the ICI ARTV website on November 17, 2014, did not violate the Journalistic Standards and Practices of Radio-Canada.”

Unfortunately, the CBC does not seem to want to adhere to the same ethical standards that they claim to promote.

You can read the full report over on the CBC or the translated version on Kotaku in Action.