There’s a new horror game making some waves on Steam Early Access at the moment, it’s called Layers of Fear and it’s an experimental horror title with a strong artistic edge. It’s made by developers Blooper Team and some players are already looking for some thorough gameplay walkthroughs to help them out with the Early Access horror title.

YouTuber Nokzen N., has a very cool and breezy walkthrough without any commentary, giving gamers some clues and tips on where to go just by visually showcasing where to go and how to get there. The playlist for the walkthrough is fairly snappy and only clocks in at less than an hour and a half. So you won’t be watching it for long. You can check out the walkthrough below

The game’s soundtrack and soundscape are really haunting and, in a way, enrapturing. It’s hard not get immersed in the game listening to the music and effects that help bring the game’s world to life.

The actual gameplay for Layers of Fear is that of a point-and-click adventure title. You can walk around freely and examine objects within the environment – there is no HUD to bog you down with any sort of micromanagement.

The game has a strong The 7th Guest vibe to it, only it’s more interactive and a lot more free-flowing, putting the progress of the narrative into the hands (or timing) of the player. 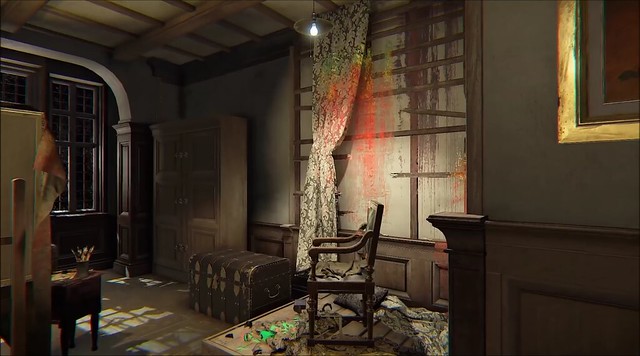 The key to enter the painting room is in the study with the grotesque Red Riding Hood pictures. It’s the old key on the desk next to the pictures.

After entering the art room you’ll find that the tone of the game changes drastically and there’s a tinge of Silent Hill that creeps into gameplay experience.

For the locked chest in the one room it’s pretty to open it. You can get the number to the lock by interacting with the candles near the demonic paintings. The number to unlock the chest is: 485

The game’s Early Access isn’t very long and if you don’t want things spoiled for you because you’re waiting for the full release, it’s probably best not to watch the gameplay videos above. If the videos, however, convinced you that this is a game you want to play right now, you can pick up a digital copy from Steam’s Early Access for only $9.99.