What’s the best way to make angry gamers stop talking about a subject? Censor it. That’s been the go-to problem solver since August of 2014 when #GamerGate got underway, and there was an internet wide censorship spree laid out by moderators, administrators and website owners alike. A large part of it was in due part to the wide reaching influence from the individuals who were able to coordinate said censorship from the Game Journo Pros secret e-mail group that Breitbart leaked last September. Well, the same thing is happening frequently with a new wave of games that hardcore gamers feel are being censored by “SJWs”.

Recently Blade & Soul became a hot button topic when gamers caught wind of changes in the localized version of the game. Originally fan translations came out ahead of the official localization and gamers who played the fan translated version of NCSoft’s MMO noticed various changes to the quests in the official English version of the game. Lead senior writer on the localization team, Stephen, admitted that they did make some changes to the quests to make the game more “welcoming” by completely altering the story and characterizations. Many gamers were not pleased with this at all.

Very similar to what happened with the Xenoblade Chronicles X censorship situation, the Blade & Soul community decided to get proactive.

Forum member Teisho from Canada created an e-mail operation, not unlike the ones coordinate by #GamerGate to pull advertising from corrupt gaming websites. He outlined various contact information for gamers to use to reach out to NCSoft regarding multiple instances of censorship made to the game by the localization staff, writing…

“Honestly, it just breaks my heart to see a few gems get absolutely drowned in a sea of vitriolic shitposts, so I’ve come up with what I believe to be a solution to that: speak with NCSoft directly. No, I don’t mean on the forums, since many of you have complained about your posts being deleted. I mean you can actually send an email directly to NCSoft, letting them know what your concerns are.

“I believe this is much more efficient than wasting time arguing with one another about who’s SJW/sexist/racist and so on in a thread that’s likely going to get locked.”

This e-mail campaign was devised after the moderators decided to start locking threads discussing the censorship in Blade & Soul.

Going by the handle of Youmukon, the community manager from Brighton, U.K., had made it clear that the topics of censorship will no longer be allowed on the forums, saying…

“We understand that some of you are really adamant when it comes to Localization. Our Senior Writer, Stephen, created a thread here for everyone to ask him questions directly when it comes to the English Localization of Blade & Soul. The team is really open about explaining why certain choices were taken. You may not agree with answers you will be given or the direction of these choices and that is perfectly fine. But we also need everyone to accept answers that are being given. Not everyone can be please with everything.”

“I would also like to take the time clarify couple things. First of all, sending complaints to an @ncsoft.com email address which purpose isn’t to receive direct messages from customers won’t really achieve anything. It is likely that your email will be either ignored or either forwarded to… the very same people who are reading these forums. Your email might also simply get caught in a spam filter and be automatically deleted.”

Any threads discussing censorship in the Western version of the game are now promptly locked, and users violating the forum rules can be temporarily or permanently banned.

Some users felt it was fine to get rid of the censorship threads because to them it was “just a side-quest”. A few users told others to get over it and that they should be thankful that the game is even coming westward. However, it turns out that it was more than just a side-quest.

As noted by Blade & Soul forum user Rahaya [backup], multiple quests and characterization changes have also been made to the game, vastly altered from the original Korean and Chinese release, with Rahaya stating…

“I understand Chinese and play Blade and Soul Taiwan and the story is one of the highlights of this game. However, it seems that the NA/EU version of Blade and Soul has changed a lot in the story!”

“The story for NA was changed, and worse, it was dumbed down.”

Rahaya rolls out just a few examples of things altered in the story by the localization team in the early parts of the game. Asking “why?”

It wasn’t just the story, either. Over on the 4chan threads some anons also noticed that the starting outfits and poses have also been altered. Lingerie has been put behind a paywall, but what’s more is that various poses have been completely removed from the game, altered instead to give the females more “empowered” poses. You can see the changes below. 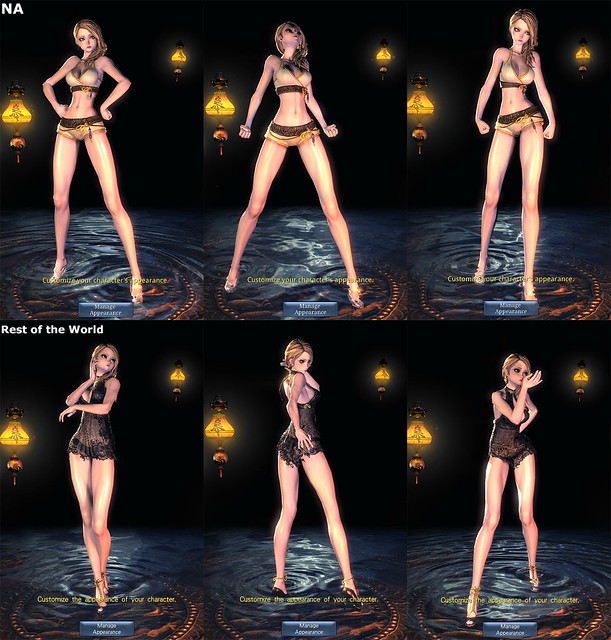 There’s also a giant list of changes and alterations made to the game outlined in a thread over on Kotaku in Action.

The changes to the story and gameplay content in Blade & Soul is just one of many recent cases where censorship has been applied to make the game more politically correct according to the authoritarian left’s worldview of sociopolitical content. These individuals are oftentimes referred to in the colloquial sense of “Social Justice Warriors”.

The so-called “Social Justice Warriors” don’t actually have real social justice activism at heart, but instead are looking to subvert culture and content to meet the whims of their desired worldview. This has become especially pervasive in comic books and video games as of late, in addition to television and movies.

Recently the e-mail campaigns for contacting Nintendo about the censorship in Xenoblade Chronicles X were banned from being posted on GameFaqs. The activists decided to move their operation to Kotaku in Action, a containment board for corruption in media journalism, #GamerGate operations, and anti-censorship activism.