There are some cool new mods making the rounds in Garry’s Mod, specifically model imports from Blizzard’s Overwatch. The two most popular characters from the team-based shooter are now available to play for free in Facepunch Studios’ mod-heavy creation suite. That’s right, I’m talking about playing as the sniper Widowmaker and the space-bending speedster, Tracer.

Steam user The Forbidden Architect put together a little video to show off the player-model of Widowmaker, where he runs around with some cool music, shooting people with a sniper rifle. Check it out below.

The model supports the original proportions from the game Overwatch, so there are no tweaks or plastic surgery modifications to make her anything more than what she already was in Blizzard’s first-person shooter.

The model is 30,000 polygons rich, with the option to change the color of the headgear and supports 2048 resolution HD, uncompressed textures. The Widowmaker player-model can also be posed and has realistic hair movement. The mod is only 12MB so it’s fairly small to be such a high-quality import. You can get the mod for Garry’s Mod from over on the Steam Workshop.

Oh and yeah, and don’t make sexual comments about Widowmaker on the Workshop page or your comment(s) will be deleted. Look but don’t talk. 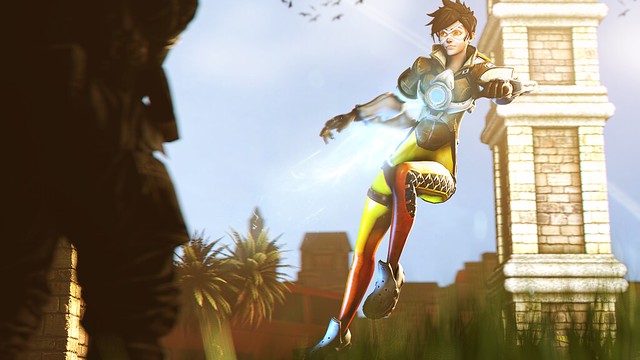 Oh but we’re not done yet.

Steam user Lenoax took time out to import the most popular character from Overwatch, Tracer.

The space-bending gunslinger has mostly been the face of the game in most of the promotional material. The player-model in Garry’s Mod was a collaborative effort accomplished by a couple of different individuals, as they had to extract the model from Overwatch, get the textures, re-rig it for Garry’s Mod and setup the face posing for the in-game posing tools.

You can also modify parts of Tracer’s outfit. You can take off her space-bending gear so that she’s just in the jacket, gloves and jumpsuit, as well as remove her goggles or shade the color and tint on them.

You can grab the 11MB mod for Garry’s Mod from over on the Steam Workshop.

Don’t be surprised if both Widowmaker and Tracer end up in some very NSFW movies in the Source Filmmaker. Ever since the game’s announcement, the community’s thirst has been real.

Blizzard’s Overwatch has been undergoing some beta tests as it preps for a full 2016 launch. You can learn more about the first-person shooter by visiting the official website.