One of the most difficult things about mobile game development is finding an audience willing to stick with a game because it’s actually fun and not just because it’s a pay-bait click-fest like many other games out there that used to be big but have practically faded from existence. Well, one company that doesn’t want to rely on cheap clicks and paper-thin design mechanics is 4:33 Creative Lab.

The developers have designed a fast-paced, isometric, 3D hack-and-slash game from the Unreal Engine 4 for mobile devices called Blade: Sword of Elysion. It could best be described as a mix between Conqueror Online and Diablo. The game has been fine-tuned for hardcore gameplay, character scaling and intense PvP modes. The action-RPG sports various levels to explore, a 10-player free-for-all arena mode, and plenty of bosses to overcome.

I had an opportunity to get some questions in to the EVP of 4:33 Creative Lab, Won Cho, to coincide with the recent soft launch of the game for mobile devices. You can check out the interview below with Cho, as it covers the game’s multiplayer, bosses, controls and the future of the property.

One Angry Gamer: Exactly how much content does Blade: Sword of Elysion have in terms of story progression? Can it be beaten and conquered or is does it live up to its promoted feature of having infinite amounts of content to replay?

Won Cho: Players will have a ton of stages to play through! So far, there are 320 stages that have been fully developed and polished. We will release them through monthly updates for global Blade players and we’ll constantly be designing and developing extra content for the game, so the fun never ends!

OAG: The initial CG trailer for the game is quite interesting because it appears to show the player-character getting stronger and better and more advanced as they head toward the end-game. Does that actually apply for the in-game play? And exactly how many bosses are in this game and how many enemy types will players come across in their adventures?

Won Cho: We’re really glad you noticed that in the CG trailer! We designed it to depict a somewhat bildungsroman of Leo – getting stronger, deadlier and having more advanced and cooler looking gear as the game progresses. We wanted to make sure that aspect stands true as the one of the game’s main purposes, continued character growth to becoming a legendary hero.

So far, there are 31 Chapter bosses, 289 mini bosses, and a whole horde of different enemy mobs that players battle during their adventures. As we continue to develop more content, we promise there will be many more available.

OAG: The combat is very intuitive for a mobile hack-and-slash title. I noticed that the game doesn’t use swipes or context-based touchscreen gestures, instead it has virtual button maps. Why did the team decide to go with a virtual gamepad instead of the touchscreen swipes or gestures like in Fruit Ninja or Infinity Blade?

Won Cho: We wanted to ensure a high standard of user experience. We did a lot of research and spent a considerable amount of time and effort making sure that Blade wouldn’t become a game people would get bored with or fatigued from. A significant number of action RPG mobile players are hardcore console gamers. So, we realized providing the most intuitive combat controls possible would be the best way to give both type of gamers a fun and memorable experience. To put it simply, we found that if players have to touch the screen to move their characters or swipe to fight, they’re more likely to get tired and stop playing the game. We came to realize that a significant number of Action RPG users are hardcore console gamers, and that it would benefit both parties by providing the most intuitive combat controls possible. 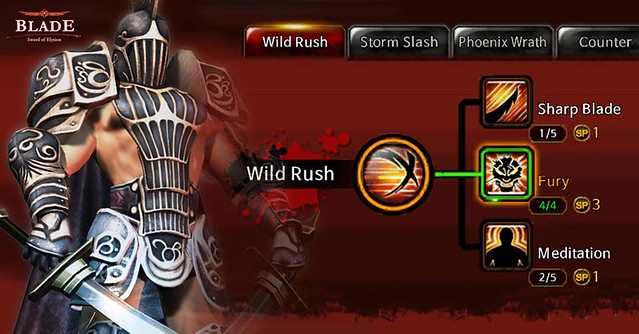 OAG: From the chatter I’ve briefly seen about this game, gamers were pleasantly shocked that this was a mobile title due to the quality of its design and how intuitive the combat was. Was the goal to bring a more console-oriented gameplay experience to the mobile arena or was it simply to give mobile gamers more control and options in how they played action-RPGs while on the go?

Won Cho: We ABSOLUTELY wanted to bring a more console-oriented gameplay experience to the mobile arena! Improvements in mobile devices have been pushing the boundaries for the apps they can run and support. As gamers at heart, we felt that it was a high time for us to develop a game that fully utilizes the high tech specs of advanced mobile devices to bring a groundbreaking gaming experience whenever, and wherever gamers go.

Won Cho: Yes, definitely! We have a fourth class character in the works and once it’s been polishing you’ll see it released soon in a future update.

OAG: The game has a rather interesting arena-style PvP mode from what I’ve seen and it’s very fast-paced and very dynamic. How important is character level versus player skill when it comes to PvP? Can a player with rather poor playing skills best another player just by having better equipment and stats or will someone with fast reflexes with blocking and counter-attacking win out over someone with better gear?

Won Cho: Well, that has a ‘yes’ and ‘no’ answer. The game provides a 1vs1 PvP mode, as well as a free-for-all arena for up to 10 players. Just like in most games, if there is a large level gap between players, it would be extremely difficult for a lower-level player to win even with very good controls and skills. But, it is possible that a small level gap could be overcome with strong skills or for gaps in equipment qualities.

OAG: On the subject of multiplayer… is there a possibility that a cooperative mode could be added for Blade: Sword of Elysion at some point in the future?

Won Cho: Yeah! Blade actually offers weekly guild siege wars in which players can co-op with their guild members to fight against other guilds. The raid boss mode would also give players another co-op opportunity. That’ll be available soon in an update in the very near future.

OAG: Are there any plans on porting the game to PC? Given the hack-and-slash combat and the ability to scale in level and equipment, it seems like a Diablo-lite that might appeal to hardcore gaming audiences on desktops quite easily.

Won Cho: We do not have any plans to port Blade to PC yet, since Blade is optimized for mobile platforms. But, it would be possible to port the game on PC via AOS emulators – so that’s always the possibility of that changing.

Huge thanks to 4:33 Creative Lab’s EVP of global publishing, Won Cho, for answering the questions. You can learn more about Blade: Sword of Elysion visiting the official website or checking out the iTunes app store the Google Play store or the official Facebook page.