XCOM 2 is easily going to be one of the biggest games of February on PC (or any platform for that matter). The game looks great and it’s been receiving a lot of positive feedback leading up to release. Well, there are already some videos popping up showcasing some of the later game weapons, armor and items for gamers to check out if waiting for the release on Friday is just too far away.

YouTuber ChristopherOdd has an hour long video where he spoils some of the late game content for gamers who really want to see what it all looks like. You can check out the preview walkthrough video for XCOM 2, below.

The video is awesome from start to finish. Christopher talks about a lot of the different, improved and new fetaures present in XCOM 2. He talks about some of the new enemies, including the Shield Bearer and the Andromedon, which is a mechanized suit that can keep on functioning even after the pilot dies.

Before he gets into the match he talks a little bit about some of the high-end, late game equipment, such as the Warden Armor or the Wraith Suit, the latter of which can pass through obstacles for two turns. This is essential for getting into hidden, tight spots or getting out of dangerous, tight spots.

Another late game piece of equipment is the W.A.R. Suit, which can turn into a shield-wall to protect allies so long as the wearer doesn’t move. 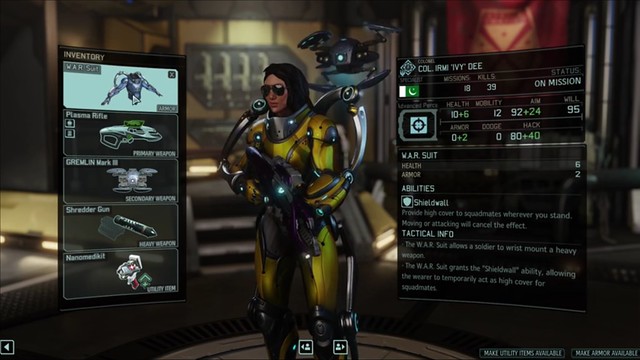 We also get to see the new and improved Exo-suit, which looks a heck of a lot like the ones from Edge of Tomorrow or Elysium.

According to Chris the Plasma rifle can attack multiple enemies on an adjacent line. The Storm gun is like a plasma shotgun, dealing massive damage at medium range. There are other late game weapons like the Fusion blade, whicht does burn damage upon impact. Speaking of melee attacks… Hellweave accessory inflicts damage on any melee attackers and has a chance to induce fire damage on the target who attacks the wearer of the Hellweave.

Equipment like the Mimic beacon can create holographic image that forces enemies to attack it. Other items like Stasis regenerates 2HP per turn and adds a total of up to 8HP in a mission. 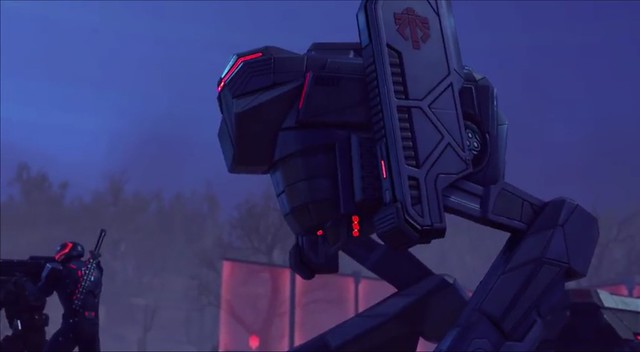 One thing that’s mentioned in the video that some fans may or may not like is that the Overwatch bait-and-switch tactic is being modified for the final build of XCOM 2. The Overwatch bait-and-switch usually consisted of using a soldier and putting them out in the open while other teammates were in stealth or hidden areas while keeping the soldier in their line of sight. Essentially, when an enemy takes notice of the exposed solider, the player would be given an Overwatch bonus to snipe the enemies from a distance. Well, Firaxis has switched it up, giving the aliens an opportunity to interrupt the Overwatch tactic.

Other changes include things like the ability to grapple up to higher structures. The cool thing about it is that the grapple doesn’t take an action-point but it does have a three-turn cooldown.

One thing that’s frequently happening in the video – even unintentionally – is that the environment gets completely destroyed in some segments. We see the fences obliterated, a car turned into a flaming pile of metal, trees being turned into splintered pieces of Ikea furniture, and burning buildings.

XCOM 2 is set to go live on Friday, February 5th exclusive on PC. You can learn more about the game by visiting the official website.