Double Fine Studios recently released the remastered version of Day of the Tentacle for the PS4, PS Vita and PC. Te game features improved graphics, higher quality sound and refined playability designed for console and portable gamers. There’s a complete walkthrough available for Day of the Tentacle Remastered to help you out with some of the puzzles and challenges in the game.

YouTuber RabidRetrospectGames has up a five part video playlist for the Day of the Tentacle Remastered, covering the game that runs for nearly three and a half hours. You can check out the playlist below.

There’s a quick rundown of the controls for those of you who need a quick reminder. Since it’s no longer relegated to being a keyboard and mouse game, it requires a bit of finger-ballet finesse to work you way around the controller layout to execute certain functions, such as using the left and right bumpers to cycle through the inventory and the Triangle to open the inventory. You can use ‘X’ on the DS4 to confirm or walk to areas. The Square button on the DS4 interacts with objects. You can also cancel or skip using the Circle button on the DS4. 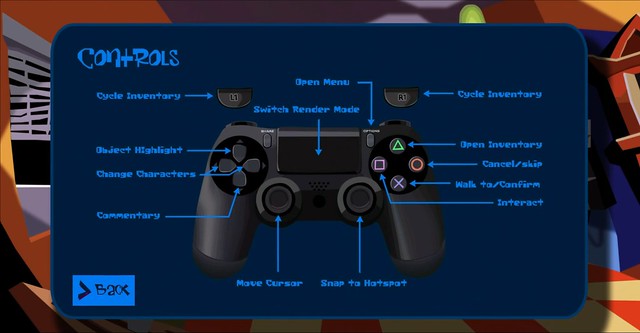 It’s kind of cool how you can instantly turn on developer commentary with the down button on the D-pad. The left and right D-pad buttons are also used to quickly switch to different different characters.

Early in the game you can grab the help wanted sign and the filler in the first room you start in. If you head into the office you can grab the Booboo-B-Gone and the Swiss handbook. After you grab the items head back into the main foyer and open the grandfather clock and then climb inside.

After the cinematics play you’ll have to find the plans, which are located just off to the side of the basement on the to-do list.

After the plans are flashed to Hoagie, head to the house and open the door. Head to the grandfather clock and open it up to head into the secret basement.

Take the plans for the super-battery and give it to Red Edison. Head upstairs, pass through the double doors and head into the kitchen through the sliding door. Grab the oil and spaghetti off the shelf. Head into the storage closet and take the bucket on the floor and the brush from inside the cabinet.

Head back inside and talk to George Washington and convince him to chop the painted kumquat tree down. This will switch over to Laverne, with the kumquat tree getting cut down it helps her out of the tree she’s stuck in.

Laverne will eventually end up in prison and you’ll have to talk to the guard and tell him that you aren’t feeling well. This will lead him to taking Laverne to the medical office.

You can take the diagram off the wall and leave the office. 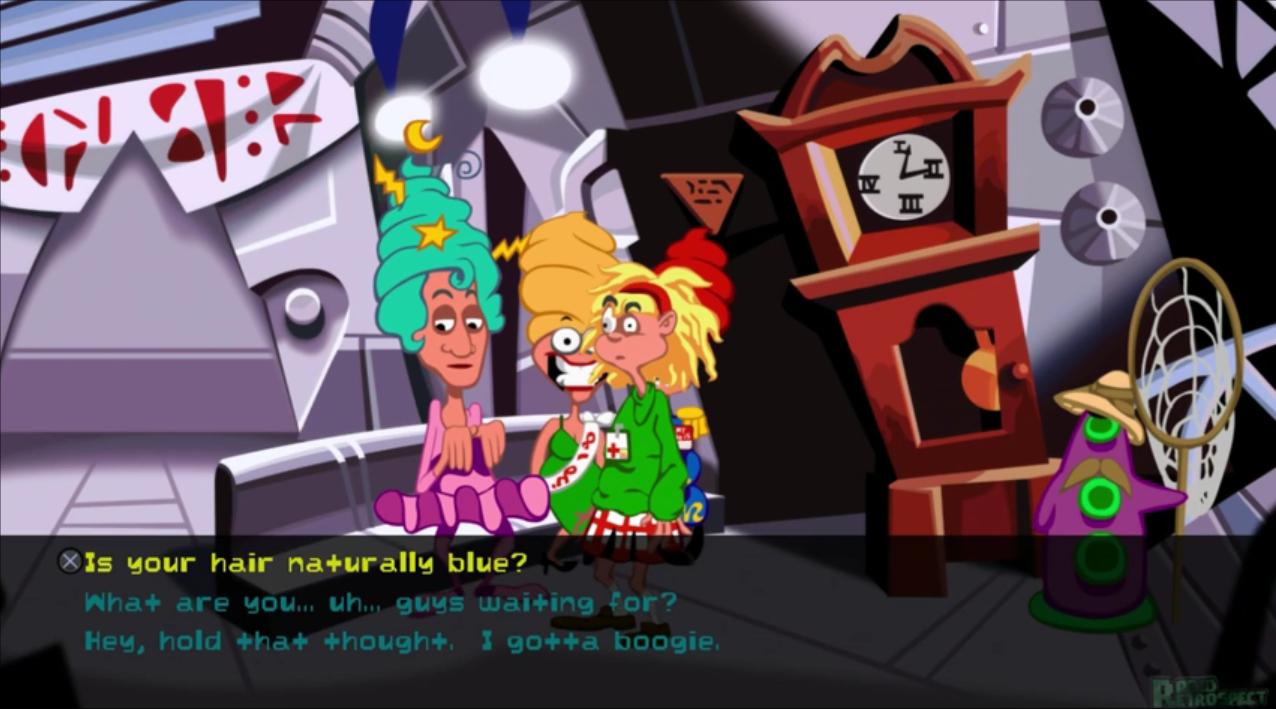 After talking to the other humans after you attempt to go outside a tentacle will put you back in jail. Talk to the guard and tell him you have to go to the bathroom. He’ll take you outside.

After getting outside, head to the right of the screen and put the tentacle diagram down the time machine portal’s toilet.

Switch back to Hoagie and head to the time machine toilet. Grab the tentacle chart from out of the toilet and bring it into the room where the flag is being made. After talking to the seamstress about the flag pattern, when she asks you to place the pattern on the desk, put the tentacle diagram on the desk.

Switch back to Bernard and head upstairs to the room where Dwayne is. After talking to Dwayne grab the disappearing ink bottle from the counter.

In the next room you can talk to the green tentacle and grab the video tape off the VCR next to the door.

Head back into the main foyer and then head upstairs.

Use Hoagie and grab the letter out of the mailbox. Put the letter into the time machine toilet and have Bernard take the letter.

Bring the letter to Dwayne.

After Dwayne leaves grab the flag gun from off the ground.

Head downstairs and through the double doors. Talk to the novelty salesman. Switch the cigarette lighter with the flag gun. Ask for another cigar and the salesman will give Bernard the cigar.

Open the grate to the left of the fireplace. Head to the vat of teeth with the chattering teeth on top. Chase the teeth to the open grate and then pick it up. Head down to the toilet time machine and put the exploding cigar, cigarette lighter and teeth into the toilet. Have Hoagie grab the items. 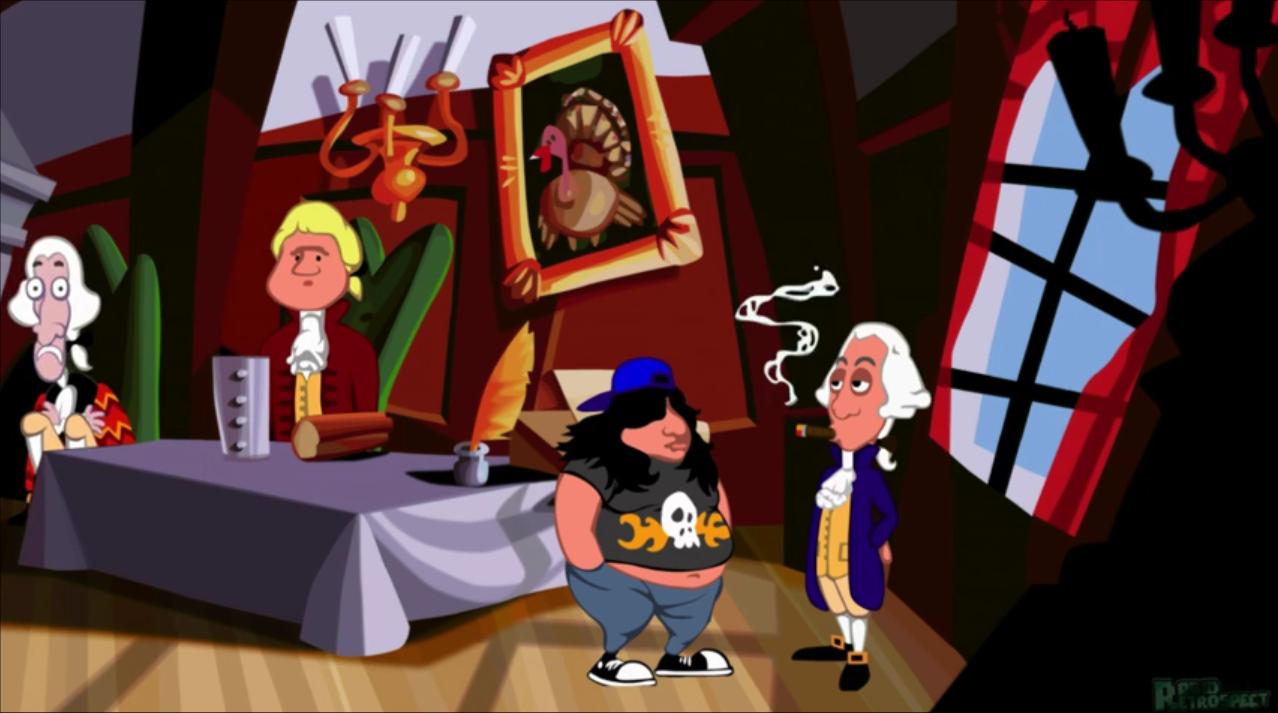 Take the cigar to George Washington and give it to him.

After the cigar explodes, give Washington the chattering teeth. This results in an argument that eventually sees a fire being built. The knitted blanket will be laid on the ground, grab it.

Head upstairs to the attic and head onto the roof; place the blanket over the chimney to scare the others out of the room. Head back downstairs and grab the quill out of the ink bottle.

Give the quill, vinegar and oil to Red Edison so he can build the super-battery.

Head upstairs and push George Washington’s bed. Call the maid. While she’s in the room grab the soap out of the maid cart. Head down into the kitchen with the water pump and fill the bucket with water. Take the soap and put it into the bucket filled with water. Use the brush and soapy water to clean the carriage outside.

Head back into the lab with Red Edison and snatch the super battery off the shelf.

Head back to Franklin and help him with the kite. When Franklin says “Now!” push it into the air. It will get struck by lightning. He’ll try it again and this time attach the super battery to the kite. The lightning will charge the battery.

Take the battery and attach it to the plug on the chron-0-john.

Switch back to Laverne and talk to the blue tentacle. Ask about entering a human into the pet contest, he will give you a tag to place on a human. This will cue a cinematic sequence once you leave the room that involves the green and purple tentacle.

After the cinematic, head upstairs into the second room with the tacky junk and grab the roller skates off the shelf. Unplug the cord from the outlet. Put the mummy on the roller skates. Put the name tag on the mummy and push him out of the room and down the steps.

Switch back to Bernard and head into the green tentacle’s room. Push the speaker to the right side of the room over and turn on the stereo. This will cause the fake barf in the main entryway to fall off the ceiling. Head down and grab it. Put the fake barf into the toilet for Laverne.

Proceed to use Laverne to take the laughing box, the fake teeth and the soggy spaghetti and place it on the mummy for the human judging contest. Use the fork to fix up the hair on the mummy to beautify him for the contest.

Use the fake barf to place it in Harold’s hair to rig the contest for the mummy. This will cause Harold to get rejected from the show, making it an easy win for the mummy.