The reviews for Dead or Alive Xtreme 3 aren’t all that hot. The game apparently is none too fun to play due to a lack of gameplay mechanics and features. However, as a show of protest against the budding Social Justice Warrior culture here in the West, and as a means of supporting developers not willing to kowtow to the reemerging puritan culture that the SJWs want to implement through censure, gamers have gone out in droves to import copies of Dead or Alive Xtreme 3 and the early reports are showing that it’s selling quite well.

According to Lewdgamer (and the link is obviously not safe for work), they reported that Dead or Alive Xtreme 3 is already sparse on the store shelves of Japanese retailers. They note that the game’s March 24th release on the PS Vita and PS4 has gone over quite well and that Japanese retailers are already suffering through a shortage of physical copies, prompting the promotion of digital copies as a supplement for those who can’t find find the game on store shelves in Japan. Unfortunately we don’t have exact figures, but they state that the game is selling out quickly at Japanese retailers.

This isn’t just news out there in the wild. Play-Asia also made a tweet on social media indicating that they’ve practically turned their entire office into a shipping yard for exporting copies of Dead or Alive Xtreme 3 to the West. They had accompanying photos to show that imports of the game from regions outside of Asia is serious business.

Our goal is to get all of your copies shipped out and that is exactly what we're going to do. #squadgoals pic.twitter.com/Qq6siRbLVI

“Our entire floor of the building has turned into the warehouse today!”

This came after news back in late 2015 that Koei Tecmo wasn’t going to be releasing Dead or Alive Xtreme 3 in the West to avoid being attacked by angry feminists in Western media. When Play-Asia stated that they would not succumb to the “SJW nonsense” and they would offer Dead or Alive Xtreme 3 to customers, the angry feminists attacked and threatened Play-Asia, thus proving Koei Tecmo’s point.

The attacks against Play-Asia only fueled their trolling habits, doubling their follower count within hours and gaining widespread support from throughout the core gaming community, as many hardcore gamers pre-ordered a copy of Dead or Alive Xtreme 3 as a show of protest against SJWs in gaming media. 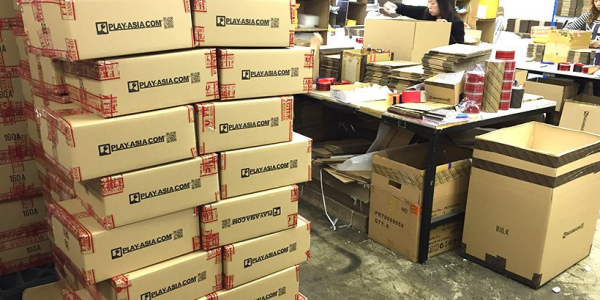 Unfortunately, as a game itself, Dead or Alive Xtreme 3 is not that great… according to the early reviews.

DualShockers treads lightly on the sands of criticism, giving the game a 60 out of 100 and lamenting the removal of the local and online multiplayer, as well as the limited mini-games and simplistic mechanics. They sum up the review stating…

“Dead or Alive Xtreme 3 is far from perfect, and I don’t see it bringing home any Game of the Year titles, but in today’s gaming landscape it’s certainly fairly unique. If that kind of uniqueness is what you enjoy, then you’ll most probably feel right at home on Zack’s new island. I certainly did, and plan to continue doing so for quite a while.”

The entire point of the game is to rack up points and increase your affinity with certain girls. Why? Well, Gameranx spells it out in their review, in which the game scored a 2 out of 10 for its shallow mechanics and lack of interactivity. The review states…

“Your reward for achieving a high rating with any of the girls is a sexy dance—not even a striptease. The routine wouldn’t be half bad if they were at least interactive in some form, but they aren’t.

“Titillating as it tries to be, the game offers nothing meaningful in the way of player interaction. As the “Owner,” you have no control apart from deciding how to photograph these characters. You have no agency or interaction with them. They’re girls under glass—mannequins in a store window. Look, but don’t touch.”

You can get an idea of what the gameplay is like without specially edited promo teases with a gameplay video below from NihongoGamer.

The lack of gameplay options, the removal of multiplayer and the shoddy mechanics was only part of the problem for Destructoid writer Jed Whitaker. While the general perception is that the gameplay isn’t all about depth, most expected that that would be the case for the fan-service heavy game.

However, Whitaker took offense to more than just the shortcomings on the technical and gaming aspects, including the option of buying things to win over the girls’ affection or watching characters like Marie Rose perform stripteases. Whitaker dropped the score to a 1.5 out of 10.

Whitaker does point out that the game’s English translation is spot-on and it’s already digitally available on the PSN store, just not in the West, and questions why Koei doesn’t release the game in English. He must have forgotten that the Japanese publisher does not want to deal with fact-free screeds from ideologically-driven hit-pieces from Western media…. not that they won’t be arriving from the usual suspects even though the game isn’t available in the West.

Nevertheless, Whitaker’s 1.5 score sent a shock wave through the gaming community based on the tone and some of what was perceived by the community as moral grandstanding. It’s no surprise that the Destructoid reviewer was absolutely ripped a new one in the comment section, with over 1.5 thousand comments and counting.

It didn’t end there, though. As spotted by Kotaku In Action, the criticisms of Whitaker’s review was taken to the social media space, where more core gamers took shots at what they described as veiled puritanism.

There’s a chain of tweets captured in an image posted up on imgur of Whitaker claiming he’s being harassed for his review of Dead or Alive Xtreme 3. He started off on Twitter by saying…

“Please. Leave me alone. If you have shitty things to say about my review do it in the comment sections. Don’t tweet at me. K thanks.

“[GamerGate] in a nutshell. Also reading comprehension is hard. Not getting fired from Dtoid, my day job is getting outsourced […]

“I’d like to see where I’ve searched out someone on Twitter specifically to tell them how fucking stupid they are as well as body shame them. Because that is what I’ve been experiencing, as well as toxic masculinity to boot.

“But remember looking at this screen cap. GG doesn’t target and harass people. They just provide all the information to and encourage it.”

I thought the narrative was that #GamerGate was trying to drive women out of tech/gaming? I’m not sure when Whitaker started identifying as a damsel in distress, but his comments above followed a much more dramatic breakdown that happened earlier, where he defends his review, exclaims that he’s a person with feelings, and laments the outsourcing of his job. 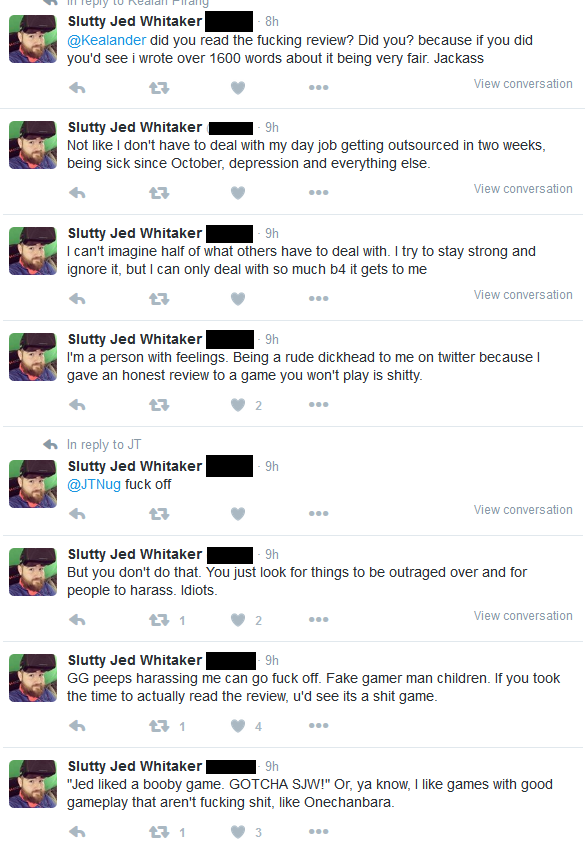 It’s certainly not as bad as the public meltdown that former tech writer for IGN suffered following the leak of the Game Journo Pros list. Matt Clark had a lot of people worried about him in what looked like a nervous breakdown happening on social media.

It’s insane to think that all of this is happening because Koei Tecmo simply wanted to avoid this kind of nonsense in the first place. It’s a real shame because they just want to make games and gamers just want to play games. Unfortunately there’s the middlemen known as the peddlers of outrage media working at various online publications who will name, shame and humiliate corporations into apologizing for servicing their target demographic, and it’s turned the interactive entertainment landscape into an unfortunate battleground for the culture wars.