The 2016 reboot of Hitman is currently out and available for the Xbox One, PS4 and PC. The game has been receiving some mixed results from gamers mostly due in part to the fact that it’s an episodic release and there are complaints from PC gamers about the always-on DRM and Denuvo DRM. Well, some gamers who are enjoying Hitman may be in need of finding ways to complete the game in a stealthy manner without getting spotted and using rather simple techniques to take out the targets in the Paris Showstopper mission. Luckily, there are some walkthrough guides available for completing the mission without causing a lot of ruckus.

YouTuber Petard managed to put together a quick 17 minute video that shows you how to complete the Paris Showstopper mission from start to finish with relative ease. You can check out the video below.

Now for those of you who didn’t know, as you play through the game you can unlock new areas and options for entering the stage and what equipment and outfits you wear.

It’s also possible to unlock the ability to smuggle items into various areas. In the video above he smuggles a sniper rifle into the shed for use later into the mission.

As showcased in the video above, Petard starts off in the kitchen disguised as a janitor. Alternatively, if you don’t have the kitchen access unlocked you can travel there the normal way by heading to the kitchen area from the outside, taking out one of the waiters or janitors and disguising as them to gain access to the kitchen area.

After leaving the kitchen, Petard moves to the door through the wine cellar to listen to a conversation from two waiters discussing the process of creating a Bare Knuckle Boxer cocktail for Novikov. You’ll find the recipe for the cocktail in the basement where the chefs are and the poison is just upstairs in the kitchen over in the corner by the window.

If you head up to the party area you can mix the Bare Knuckle Boxer cocktail and put the poison into the cocktail drink.

You can wait at the bar for Novikov to come to the bar and get the drink. When he gets poisoned you can follow him into the bathroom and kill him by drowning him in the toilet that is filled with his own vomit. After you stuff his face in the toilet full of vomit, forcing him to choke on his own stomach fluids in a filthy toilet bowl, you can take his body and stuff it in the cabinet behind the toilet once he’s completely dead and drowned in the toilet bowl full of vomit. 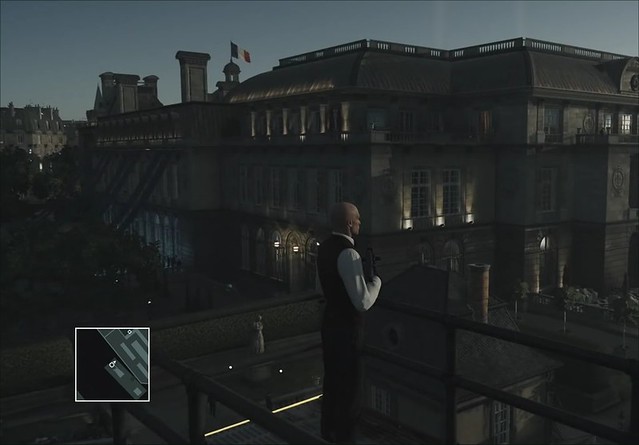 From there, head outside and if you were able to store a weapon in the shed – like in the video above where he put a sniper rifle in the shed – you can head to the shed, grab the sniper file and then head down to the locked gate and picklock the gate. This will lead down to the canal.

There’s a crane on the docks that you can climb up that gives you a large view of the mansion. You can use the sniper rifle and wait on the crane for her Margolis to step out onto the balcony.

Once Margolis steps out and you snipe her from the crane you can head out from the docks and through the garden to either take the helicopter or take the boat down by the docks.

That’s how you can quickly complete the Paris Showstopper mission with minimal effort and without getting spotted.

The first episode of Hitman is available right now for $14.99 or you can get the full season for $59.99. The title is out and about for the Xbox One, PS4 and for Steam on PC.