Studio Wildcard may have had to deal with a rather ridiculous lawsuit with Trendy Entertainment but they’re still chucking out new content for ARK: Survival Evolved. One of the latest content packs for ARK involves the new Woolly Rhino.

YouTuber Sl1pg8r offers a half hour guide on how to capture and tame a Woolly Rhino. You can check out the video below.

In the video they used tranquilizer darts to put down the Rhino. It takes about eight total tranqs to put a level 16 Woolly Rhino down long enough to tame it.

If you have enough, you’ll likely want to use 99 narco berries to keep the Rhino knocked out while you tame it. They happened to come across the rhino up in the snowy peaks near the mountains. So it might be worth checking up there to get your hands on one. 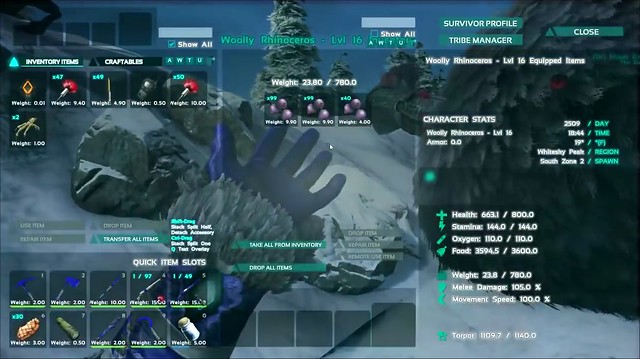 Interestingly, the Rhino can be fed mejoberries to eat. The Rhinos are also pretty fast after it gets to the max top speed, but it requires some time to get up to its top speed. The Rhino also has a rage meter that allows him to hulk out and beat the crap out of things.

In order to craft a saddle for the beast, you’ll need 24 Engram points. It takes 250 hide, 130 fiber, and 60 metal ingots to craft. It’s steep but not too steep when it comes to resource requirements.

The update recently went live for ARK: Survival Evolved on both PC and Xbox One, so you can get your hands on the new Rhino, along with the other animals right now.

For more info on the game, feel free to pay a visit to the official website.