It seems like the story for the 2016 edition of DOOM  for the Xbox One, PS4 and PC would be pretty simple, but it’s actually a lot more layered and complex than some people may have thought. The ending is a real cliffhanger and for those of you who need the DOOM ending explained, you’ve come to the right place.

YouTuber RabidRetrospectGames has a near two hour video featuring only the story cinematics for DOOM that helps put the narrative into perspective. You can check it out below.

So basically, the Doom Guy wakes up from the slab and begins to rip and tear. The Doom Guy was inside of a satanic hell box owned by UAC. After putting on the helmet he receives a flashback that reveals the Praetor Suit he’s equipping has been infused with demonic power along with UAC’s prototype Argent technology, making the Doom Guy and the Praetor Suit stronger, faster and more deadly than ever before.

Olivia Pierce was in charge of bridging the Mars facility with the Hell world. They sacrificed humans in order to open the portal to Hell in hopes of creating a new world where humans would be the underlings to a select few who would be demigods amongst men, led by Olivia Pierce.

Dr. Samuel Hayden was originally working with Olivia Pierce to open a portal between Mars and Hell, but the demons didn’t want to play nice and any of the UAC staff on Mars that wasn’t turned into a demon spawn was killed by the demon invaders. Dr. Samuel Hayden helps the Doom Guy in order to stop Olivia Pierce from carrying out her plan.

Vega is a sentient intelligence assigned to Mars who also helps aid the Doom Guy by directing him to the various Praetor Suit and weapon upgrades scattered throughout the UAC Mars installation. 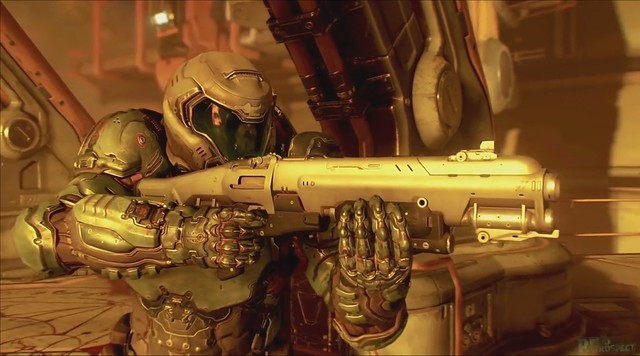 The Doom Guy attempts to use the satellite to find out what happened at the UAC facility and Dr. Samuel Hayden reveals that 61,337 casualties occurred and 64% of the staff that weren’t killed were turned into demons.

Hayden explains that the UAC staff exploited Hell and its resources to advance human technology, and that doing so was in mankind’s best interest. Hayden also explains that the casualties and destruction that occurred at the UAC facility was the “cost of progress”.

Olivia Pierce is still alive in the facility and proceeds to try to tear open a portal between the human world and the demon world. Dr. Samuel Hayden then wants the Doom Guy to stop Olivia by killing her.

After the Doom Guy destroys all the Argent sources, Olivia takes the final Argent Accumulator and attempts to open a direct portal to Hell that cannot be closed. 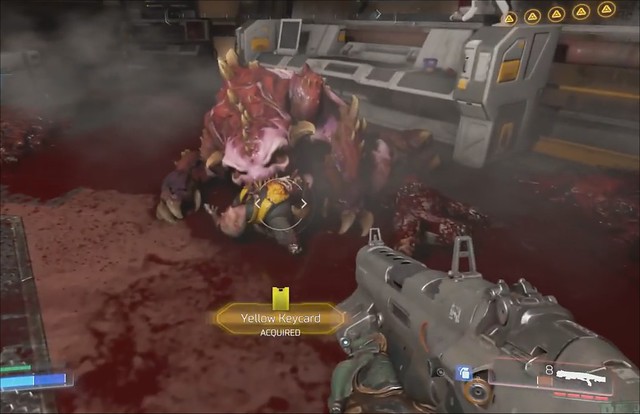 Doom Guy chases Olivia to the Argent Tower where she jumps into the power source with the Argent Accumulator.

The Doom Guy chases Olivia into Hell and then attempts to fight his way through Hell to get back to Mars. The demons of Hell expected the arrival of the Doom Guy.

The Doom Guy happens upon a symbol on an ancient demon artifact that is the same as the symbol on his helmet and the one that was above the altar where he awoke from. It turns out that there was a soul so tainted in the fight against hell spawns in an ancient fight between good and evil that the soule was unable to ascend. Instead, the soul was granted great powers by the Seraphim — powers of might and speed — thus the tainted soul was forever trapped to fight endlessly against the hordes of Hell as a Doom Slayer. The Doom Guy turns out to be the Doom Slayer, the only one possible to pass between the portals of the human world and the demon world as a never ending crusader against the dominions of hell.

It turns out that the Doom Guy was last in Hell before being brought back to Mars by the UAC. 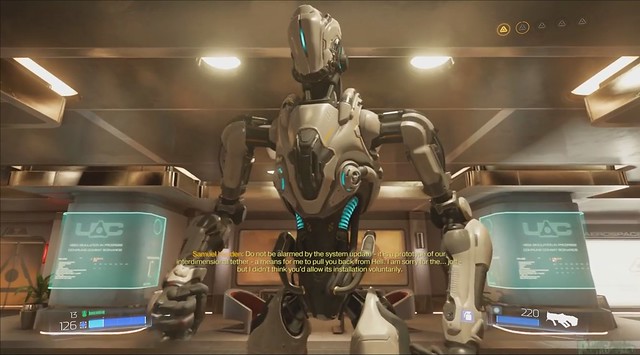 Data logs throughout the game reveal that Dr. Hayden and Olivia Pierce were originally working together to control and research Hell’s resources and Argent energy, but eventually Pierce and Hayden had dissenting opinions about the research on Hell.

It turns out that Olivia became more and more obsessed with the Helix stone, an artifact they found in the early days of their research of the Hell plane. The Helix stone was how they managed to manipulate Hell’s energy. It was an ancient relic that was what led the UAC to the Doom Guy, who was in slumber while in Hell.

Dr. Samuel Hayden still wants to control Hell’s energy, but he also wants to close the portal to Hell. He directs the Doom Guy to the facility where a prototype weapon called the BFG 9000 is located, giving the Doom Guy the necessary tools to kill whatever comes through the portals.

A data log reveals that Olivia Pierce was not happy that Dr. Samuel Hayden recovered the Doom Guy from Hell, because according to the demon prophecies, they believed that the Doom Slayer would return to kill all the minions of Hell.

It turns out that the reason Olivia didn’t like that the Doom Guy was recovered by Hayden and his team was because the demonic voice and mastermind behind the Hell minions was working with Olivia Pierce in order to open the portal gates. The demon voice did not want the Doom Slayer free, since he would disrupt their plans, which he did. 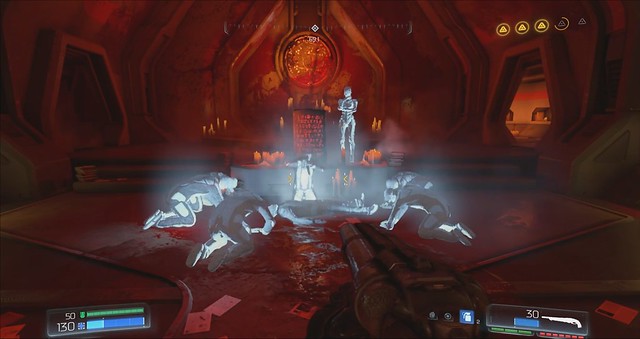 Eventually it’s revealed that the “sacrifices” that Olivia and her team had to make in order to take steps to opening the portal to Hell literally included human sacrifices performed in front of a demon tablet at a satanic altar.

Following the revelation of the sacrifices that Olivia was making, Dr. Samuel Hayden then reveals that retrieving the satanic UAC tomb with the ancient engravings on them was a calculated move on his part, and that he knew that Olivia Pierce was “weak”. He also knew that the only one who could stand in the way of the demon hordes – if the Hell portal were ever fully opened – was the Doom Guy. 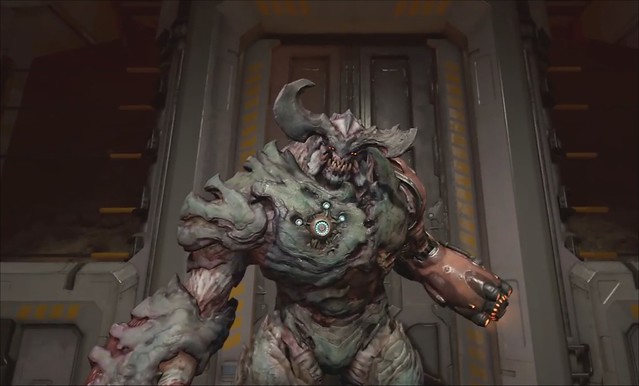 After a gruesome fight with the Cyberdemon, the Doom Guy is transported back to Hell after he rips out the Argent Accumulator — which works as the heart of the Cyberdemon.

The Doom Guy eventually retrieves the Crucible and is led to the Hell Well by the AI Vega, who sacrifices himself to close the final portal and stop Olivia Pierce for good. The Doom Guy heads through the portal to the Well and uses the Crucible to deactivate the wraiths powering the Well.

At the core of the Well the Doom Guy finds a bloodied Olivia Pierce inside of a demonic circle, where she’s sucked into the circle to make way for the Spider Mastermind, who is a grotesque fusion of the UAC technology and the power of Hell.

After an epic battle, the Doom Guy fills (and explodes) the head of the Spider Mastermind with the BFG 9000, and is then tethered back to the UAC facility where Dr. Samuel Hayden is waiting. 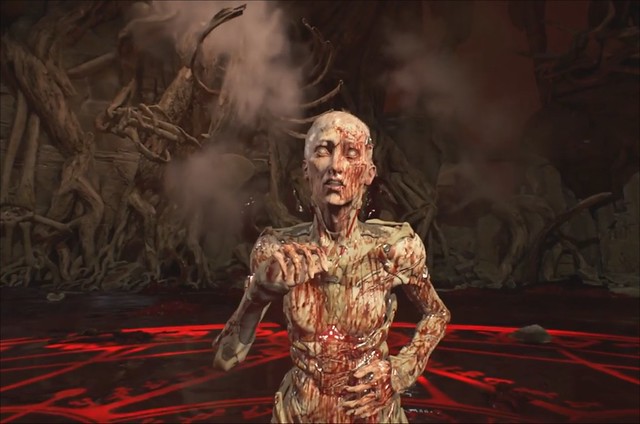 It turns out that Hayden still wants to continue the work that UAC had been doing before, but without the interference of demons running amok.

TL;DR: Many old-school gamers suspect that the story isn’t so much a reboot as it is a continuation from DOOM 1 and DOOM 2, the second of which ended with the Doom Guy fighting a John Romero head inside of a Titan demon that infinitely spawned other demonic creatures. Some theories suggest that after defeating the Titan and going through the events of DOOM 64  (as alluded to in this 2016 rendition of DOOM) the Doom Guy slumbered in Hell until he was awakened by Dr. Hayden, where he continued his fight against the demon hordes following UAC’s meddling with the realm of Hell.