Bethesda recently enabled Xbox One users to join in on the sweet nectar of the PC Master Race called “mods”. Modded content helps extend the life of a game indefinitely, and for a long time PC gamers had access to mods exclusively. Well, now that’s changing to some extent and Xbox One gamers can now enjoy the post-apocalyptic wasteland of Fallout 4 with certain mods enabled. For those of you who need a little bit of help in getting started, there’s a guide teaching you how to install Fallout 4 mods on the Xbox One.

Eurogamer put together a quick near-five minute video walking you through each step in getting the mods to work and playing the game efficiently. You can check out the video below.

First thing is first. You’ll need to have the updates turned on. You’ll know if your game is up-to-date if the new menu has been installed and the additional option like “Mods” appears on the main screen.

From there, simply click on “Mods” from the main menu. You’ll also need to have a Bethesda.net account, so be sure that you’ve registered an account before attempting to download and play-test any of the mods made available on the Xbox One version of Fallout 4.

After creating an account and clicking on the “Mods” option from the main menu, you’ll be greeted with a library of mods on a menu that is setup similar to Garry’s Mod.

The video notes that the mod selection started off rather thick, with more than 800 mods made available right at the start.

They’re broken down into categories, with the mods yo uhave installed being at the top, while the most popular mods are listed just below that. The latest mods added to the game are also made available just below the “Popular” category.

After the latest category you’ll find all the mods broken down in alphabetical order. This ranges from hair, pets, guns, characters and cheats, to buildings, ammo, quests and companions, along with every single thing in between. 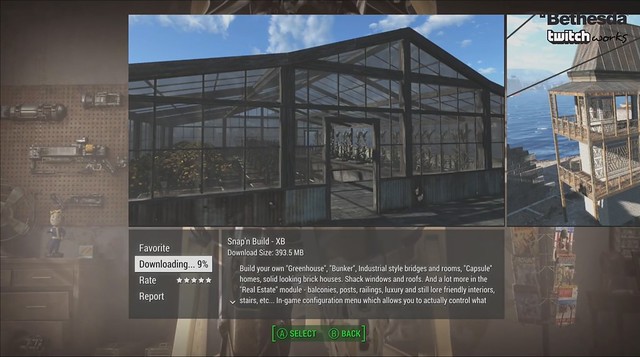 The video points out that just like other mod managers, it’s possible to click on a mod you want, choose to download it, favorite it or rate it. Once the mod is downloaded, head to the “My Library” section and and you will need to click on “Enable” to activate the mod(s) you’ve downloaded.

You can only download 2GB worth of mods on the Xbox One, so you’ll have to play Tetris with what content you have on the system at any single one time. This means if you go for HD upgrades or buildings or character overhauls, you can easily zap 800MB to 1GB worth of data in just one go.

Also, nude mods will not be available for the console versions of Fallout 4, which is kind of funny given that the game is rated ‘M’ for Mature. I guess they still need to keep it kid-friendly to protect the poor, oppressed beta cucks from seeing big boobs, which might scare off people like St. Anita and Jonathan McIntosh, or keep the giant floppy penis mods out of the library because… The Patriarchy!

While it might seem like you’re ready to dive into the wasteland with your modded Fallout 4 content, you’re not quite there just yet. If you already have a saved game you’ll automatically get a duplicate of that save, only the dupe will have a “Modded” label by it, indicating that the mods you’ve activated have modded the save file. If you want to play your previously saved game with the new mods, you’ll need to load the “Modded” version of the save, which should be visible in the load game menu.

You will not be able to earn Achievements or Trophies when using mods on your saved game. So in order to progress legitimately, you’ll have to play the vanilla saves. If you attempt to load a modded game and then save it over the vanilla, you’re fresh out of luck because the saved games with any mods installed are automatically slapped with the “Modded” label.

Fallout 4 mods are available right now for the Xbox One and PC, and they will be available for the PS4 in June. You can learn more about creating mods for the Xbox One version of the game, or using Bethesda’s patented Creation Kit to get the most out of the game. You can check out the video below or visit the official website for more information.