If the latest crop of DLC for Call of Duty just wasn’t to your liking, maybe the introduction of mechanically inclined, undead soldiers will get your interest bone wiggling and waggling in the right direction.

Activision recently sent out a new trailer for the upcoming DLC for Black Ops III called Descent. The new pack contains four brand new multiplayer maps and an all new campaign-style zombie map called Gorod Krovi. You can check out a preview of the map and some of the flying dragons and cyborg zombies in the trailer below.

I don’t know how the giant fire-breathing dragon fits into it all, but it looks pretty cool. It’s showcased in a couple of scenes roasting the mechanically altered zombies into a burnt crisp. Anyone up for a zombie shish-kabob?

The trailer also glimpses a look at the new gumball perk machine, but they don’t showcase what any of the new perks will be. There will be some brand new weapons, including the return of the Tommy Gun and a few other dual-wielding weapons for those with an ambidextrous streak. 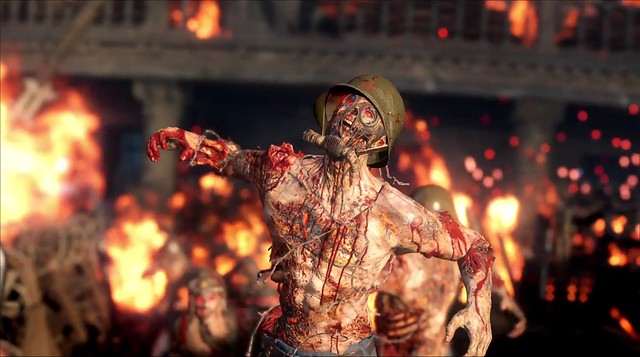 Some of the new zombie designs look kind of badass. We see a tanked up cyborg zombie decked out in armor from head to toe, along with an electrified skeletal zombie, climbing out of a pile of rubble like some sort of escaped Deadite from Evil Dead.

The four other multiplayer maps aren’t showcased here, just the Gorod Krovi map. It’s likely going to be the most popular of the five maps anyway, so why not pimp while it’s hot?

Aside from battling in the ruins of Stalingrad, gamers will also have some competitive matches to experience in a variety of unique maps from the Descent DLC, including the Rumble map, which sees two giant robots rumbling in the ring while parts and pieces fly off down below. Players will battle in the arena beneath the two robots while parts fall and pyrotechnics fly. I’m instantly reminded of this scene from the B-movie mech classic from 1989.

You can look for Call of Duty: Black Ops III Descent to launch first on the PS4 starting July 12th. The new map pack will then launch at the end of the month for the Xbox One and PC.