Oftentimes there are jokes in the gaming community that Social Justice Warriors want nothing more than for women more attractive than them to wear nothing but hijabs, but sometimes those jokes evolve from a meta-cultural meme into an actual policy.

Eventhubs is reporting that cosplayer Ashley Riot was forced to cover up her lower half when cosplaying as Street Fighter character Cammy White at this year’s CEO 2016 event in Orlando, Florida. The FGC tournament plays host to plenty of cosplayers and fighting game enthusiast from around the globe, but this time someone at the hotel thought that Ashley cosplaying as Cammy was just too risque for public exhibition.

The cosplayer took to Twitter to make it known that she was forced to self-censor in the public venue.

Thanks so much to whoever complained about my costume at #CEO2016! Now Cammy has pants! #toohotforCEO pic.twitter.com/eSOpRnKOt8

CEO 2016 event organizer Alex Jebailey has been coming under fire all day since the act of censorship transpired. Jebailey explained that he nor the staff of CEO were trying to censor cosplayers, and that hotel management security explained to Riot that she had to cover up after they received complaints.

Whoever was dissatisfied with a woman taking control of her own sexuality seem to want to drag female empowerment back to the era of the 1950s.

Riot told her followers not to get angry at the CEO staff following the act of censorship, stating that it was the fault of the individual complaining about her legs and butt, and not Jebailey, explaining on Twitter…

“To be clear, the @CEOGaming staff has been amazing and respectful. I’m mad at the person complaining about MY LEGS SHOWING!!! […] Hey guys, please don’t hassle [Alex Jebailey]! It’s not his fault the Orlando Wyndham was a bunch if prudes :p he’s a very nice man.”

Typically Ashley Riot’s Cammy outfit contains a lot more flesh on display. You can see a photo from a Wirm Photography shoot where Riot is decked out in her Cammy gear from head to toe.

The outfit that she actually wore at CES can be viewed below before she had to cover up. 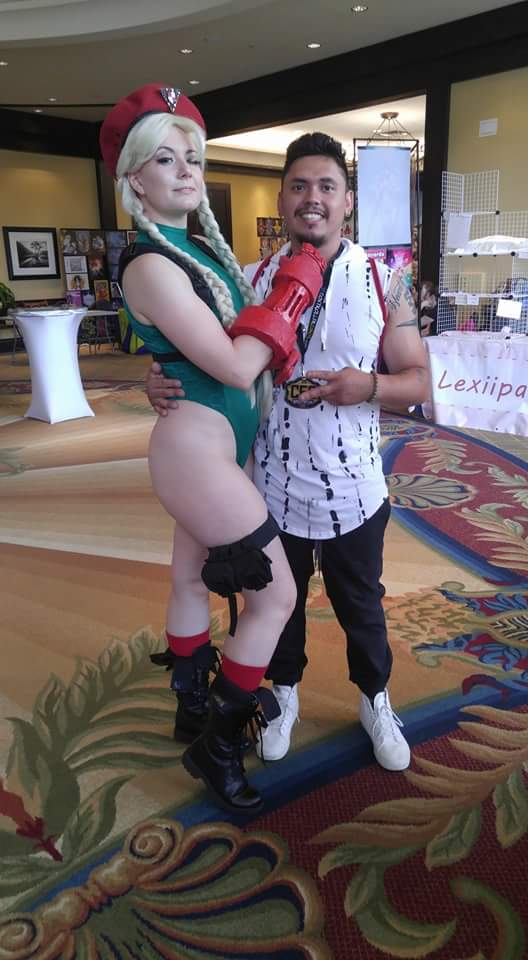 Lately female sexual empowerment has been coming under fire from the Regressive Left, also known in popular media as the Social Justice Warriors. They’ve been increasingly gaining control of various media outlets and instituting fulcrums of censorship through various hobbies and markets. Mainstream gaming in the West has had to practically remove all forms of female sexuality, and comic books are constantly undergoing criticisms and shifts to move away from catering to their mostly male demographic.

It now appears as if cosplay culture is now under attack, first with PAX instituting a ban on “aggressive navels”, as outlined on their PAX West Safety & Security section, and now female cosplayers dressing up as Cammy coming under fire for exposing their legs.

Funnily enough, commenters on the Event Hub article pointed out that Ashley Riot’s outfit is actually more covered up than most bathing suits you would find at a hotel pool.