The PS4 may have a pathetic line-up of AAA titles currently available, with only Uncharted 4 and Bloodborne standing out as killer apps, but on the indie front Sony has been acquiring some of the more unique and fun-filled games out there, including Zeboyd Games’ upcoming JRPG-inspired cyberpunk tale, Cosmic Star Heroine.

Players take on the roles of a heroine and her buddies as they attempt to unravel a conspiracy involving aliens, robots and forbidden magical technology. It’s a classic cyberpunk tale told through the lens of a 16-bit style role-playing game. You can scope out the E3 2016 trailer below.

I was hooked when I heard that saxophone in the theme song. Love me some sexy saxophone.

The cyberpunk themes in this game are legitimately spot on. The gun-metal grays set against neon lights fused with uncomfortable looking cars and a Chinese-aesthetic draped over the concrete jungle just reeks of cyberpunk. It reminds me a lot of the futuristic scenes from Chrono Trigger fused with the SNES gem Excalibur 20XX.

Well done to Zeboyd for nailing the atmosphere and look in Cosmic Star Heroine. 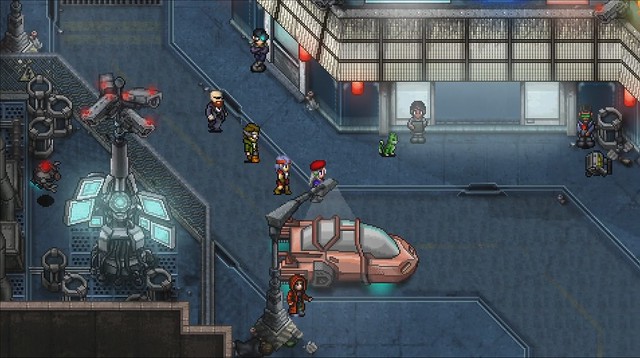 The really great part about it is that I’m not the only one looking forward to this game. The comment section is rife with gamers who grew up on games like this that helped define the Golden Age of gaming back during the 1990s.

The music, the look, the characters, the themes… if Zeboyd managed to tell a compelling story in Cosmic Star Heroine then we’re looking at a new modern day classic in the making. Hopefully they have a story to match the game’s look.

If you’re as geeked about this game as everyone on the YouTube page, then you won’t have to wait long for it to release. It’s due to drop this summer on the PS4 and PS Vita for only $14.99. If you’re a fan of the old-school classics you’ll definitely want to keep an eye out on this one.

Need more info? Be sure to hit up the official website.