A shooting game where you bring girls to orgasmic pleasure? Well now that’s interesting. Some feminists have been complaining that there aren’t enough games and educational material out there teaching women how to pleasure themselves or promoting women embracing the pleasure of their sexuality, so PQube Games and Inti Creates are filling in the gap with their game Gal*Gun: Double Peace.

The object of the game is to rapidly touch and rub your waifus until they’re completely satisfied. It all happens fast and furiously and includes lots of butt slapping, crotch grabbing, boob rubbing and head patting (the last of which is so vile it had to be removed from the Western version of Fire Emblem Fates).

The story for this game is straight-up crazy, with the press release stating…

“Houdai, a typically incompetent high school boy when it come to matters of the heart, accidentally eats a full power cupid shot and becomes insanely popular with the ladies at his academy. However, having an entire lifetime’s sex appeal condensed into one day is not without its problems.

“Our hero finds out the hard way that being Mr. Popular isn’t all it’s cracked up to be. Houdai must somehow resist every cute girl that throws herself at him in an effort to find his true love! If Houdai doesn’t find “the one” and confess to her by the end of the day, he will be forever alone!”

There’s a semi-SFW (or semi-NSFW, depending on how you want to view it) trailer that is lightning quick and riddled with all sorts of upskirt shots and girl-groping action. Check it out below via AllGamesDelta.

So there’s a lot to take away from this minute and 43 second trailer. First off, it’s filled to the brim with mimetic material, much of it commonly found in anime forums and imageboards. If you’re into memes surrounding waifu (digital wives) there’s no shortage of it in Gal*Gun Double Peace.

Also, there are plenty of moments that are just out and out licentious; we have the main character snapping upskirt shots, peeping under girls’ dresses, slapping butts, rubbing backs and squeezing boobs. Heck, you can even scour the lockers for a pair of panties.

This game has no shame.

But then that’s where it moves into interesting territory.

Complaints from media have been multi-fold about the gaming industry: it’s too violent, too sexist, too gory.

In this case we have a fast-paced action shooting game where you “shoot” the girls with massages, touching, rubbing, caresses, and affection. Is the contextual alteration of the “shooting” still violent in the eyes of the media?

We also have a cast almost entirely made up of females with the exception of the lone main character. 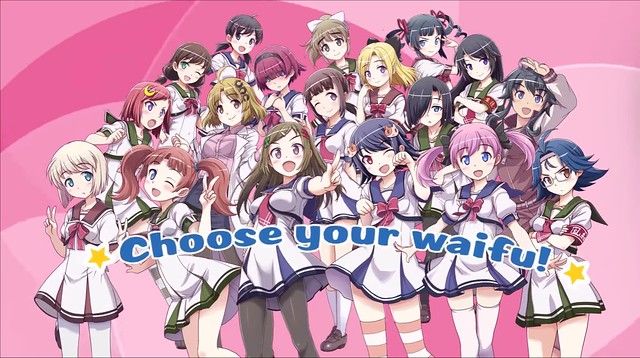 It’s the sort of game that easily passes the Bechdel Test. But is it enough to fend itself off from angry leftist journalists?

The game sports a campaign story mode where Houdai must find true love by the end of the day or end up being alone forever. It’s an interesting intersection of rampant lusty girls throwing themselves at Houdai intermingled with a story about finding a connection beyond the limitations (or lures) of lust itself.

And that brings us to the next point: does this still make the game sexist even in light of its themes centered around pleasing women to keep them away from the main character?

Game journalists oftentimes decry any depiction of a fictional video game character that they deem isn’t a fully realized character, but when the theme centers around a guy fighting off every female save for the one he’s attracted to, does the objectification of women being little more than pleasure pads still rank the game as sexist even when the main object of the game is to find a connection with someone beyond them mindlessly lusting after the main character? 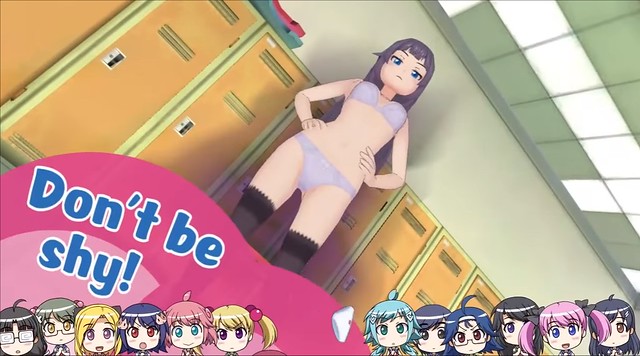 With the media throwing around all these ridiculous attacks against games based on what the female characters wear, it’s hard to have conversations about games that actually try something new. It’s cool to see PQube sticking with their guns and releasing Gal*Gun: Double Peace in both Europe and America. That’s right… the SJW-infested America will be receiving this game.

The salt will flow.

In addition to the story mode, side-quest mode, score attack mode and the Doki-Doki mode, there’s also a mode where you can outfit the girls in different attire based on the clothes you acquire throughout the game.

You can look to get your hands on Gal*Gun: Double Peace for the PlayStation 4 and PlayStation Vita starting July 15th in Europe and July 19th in North America. You can learn more by joining the Gal*Gun Facebook community.