Comcept USA will be including limited edition figurines in the Signature Edition of Mighty No. 9 for the Xbox One and PlayStation 4. If you’re a Wii U owner or a PC owner, tough luck but you’re going to be getting the short end of the stick on this one.

The Mighty No. 9 figure will be included in the package with a copy of Mighty No. 9, and a foil signature from Keiji Inafune on the front of the box.

The figure is of the main protagonist of the game, Beck. It comes with three different exchangeable expressions, while set atop a blue circular base. The figure is 6.5 inches tall and features Beck in a standard standing pose. You can check out a larger image of the Signature Edition below. 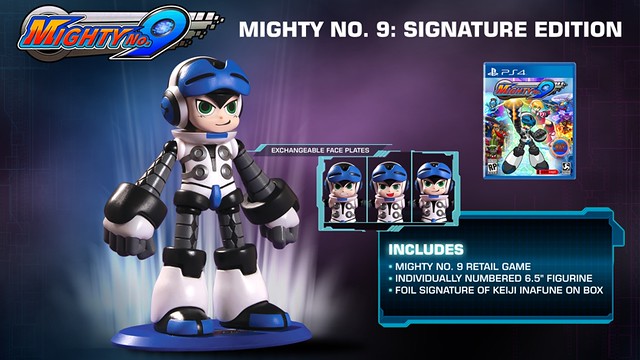 This version of Mighty No. 9 will run you a rather respectable $59.99. Usually limited collector’s editions are anywhere between $89.99 and $129.99. In this case, the figure is pretty cheap, so you won’t have to pay out the wazoo the way you would for other games… like Battlefield 1, which has a rather impressive looking figure carrying a mace and a Mauser pistol.

The Mighty No. 9 Signature Edition is being sold on Amazon and on the Square Enix store. You can expect to get your hands on it starting June 21st.

Most surprising to me is that this game not only suffered from ridiculous delays but it managed to get downgraded in the process in order for them to squeeze the game onto the seventh gen consoles. It’s pretty embarrassing, especially to be a Kickstarted title.

One of the things that kind of baffled me was why they didn’t just plop it out on Steam Early access first, get some feedback, refine it and then make the leap to home consoles? It would have worked a heck of a lot better than the method they used instead.

Anyway, it’s a hair’s strand stuck in a thimble few people care about, so I guess at this point it’s just a matter of seeing whether or not the sales for the game will be decent enough to keep Comcept going or if gamers will have given up on this potential Kickstarter disaster.