Square Enix has officially released Star Ocean: Integrity and Faithlessness for the PlayStation 4. The game is currently available for purchase both from retail and from the digital PlayStation Store. If you decide to pick up a digital copy of the game, you’ll be treated to a free dynamic PlayStation 4 dashboard theme featuring the characters Fidel, Miki and Relia. Sadly, Fiore didn’t make the cut as part of the dashboard theme.

Over on the PlayStation Blog, Square Enix social marketing manager Kaori Takasue spends a good deal of the post talking about the game’s voice actors and how Square Enix will offer some post-launch support in the form of taking the game to the Anime Expo 2016 between July 1st and July 3rd at the Los Angeles Convention Center.

They will host a panel there called “Aligning the Stars”, which will feature the all-star voice cast from Star Ocean: Integrity and Faithlessness being on hand to answer questions, partake in autograph signings and even have cosplay gatherings. However, be warned, if you go in a cosplay outfit you might get hit with a censurable lecture from someone on the Regressive Left or the Puritanical Right to force you to cover up cleavage, legs, arms or even your face. The only safe cosplay in today’s era is the Burka cosplay.

But getting back to the game… the PlayStation Blog offers a video detailing the game’s voice cast and who you can expect to be on hand at this year’s Anime Expo, which you can check out below.

In addition to the whole voice cast thing… they also detail what’s new in this version of Star Ocean. The promotional team have been heavily touting the new emote system, the advanced team skills and crafting elements, as well as the all new real-time active battle system, which allows players to face off against enemies within the game world without it going into a separate battle screen.

Many fans of Star Ocean might remember that the older titles would feature random battle encounters and would teleport players to a battlefield to duke it out. This time around everything takes place on the same screen. 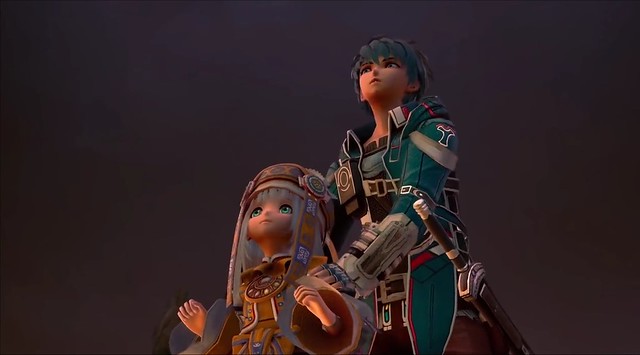 The one thing that impresses me most about the game is the clarity of graphics for the cut-scenes. The HD visuals and crisp resolution really helps give this Star Ocean a distinctive look.

Whether or not the story will be able to stand the test of time and hold up to the visuals is a whole other story. The Star Ocean series has never been known for their particularly groundbreaking storylines or characterizations, but at least the art and combat looks righteous this time around.

You can grab a digital or physical copy of Star Ocean: Integrity and Faithlessness. Keep in mind, though, that this was the game where they had to diaper-up the characters because they feared criticisms from Western third-wave feminists, as reported by Niche Gamer.

At least they didn’t touch Fiore’s outfit in the game. She’s likely going to go down in history as one of the more popular characters from the series. You can learn more about tri-Ace’s and Square Enix’s new JRPG by hitting up the official website.