Atlus was forced to be the whipping boy for Nintendo in the localization process of Tokyo Mirage Sessions #FE for the Wii U. Nintendo made a statement acknowledging that Atlus would be censoring – oops, I mean localizing – the game according to their standards for the West. Well, the censorship was so heavy handed and obvious that true gamers decided to mod the Japanese version’s uncensored content into the American version of the game.

DualShockers is reporting that a group of modders from the GBA Temp forums are currently rolling out fan-made patches that remove the censorship from Tokyo Mirage Sessions #FE.

So what exactly does the fan-made, modded patch change? Well, GBATemp member Sakitoshi explains in a post…

“Reverted costumes back to Bikini’s, also changing the menu icons back and their original names and descriptions.
– Completely redid Chapter 2 and a few other small files to return references to Gravure Modelling, this also uses the original voice files.
– Fixed any map changes relating to pictures in dungeons that were changed.
– Swapped the English files out for Japanese versions for retranslated files.
– Healing points no longer come in envelopes.
– Changed Profiles to reflect the character’s real ages and change back references to Gravure Modeling.
Reverted any censored prerendered Cutscene files.”

If you don’t think that the censorship is all that bad, they basically removed all the cleavage from the game, changed the characters’ ages, replaced the swimwear for both the males and the females, and blurred or covered up any shots that showed panties. 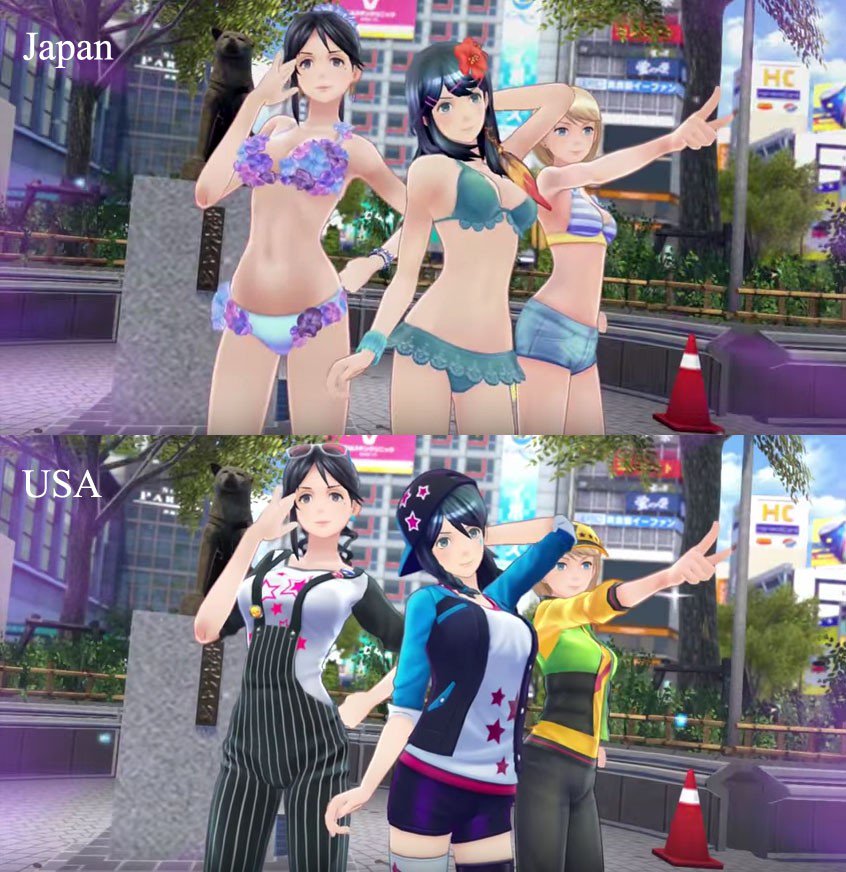 There’s an imgur album that showcases a lot of the different changes that Atlus was forced to make to Tokyo Mirage Sessions #FE when censoring the game for its American and European localization. Kotaku In Action put together the album filled with comparison shots between the American and Japanese version of the Wii U title below.

The game had been getting pelted left and right leading up to release as comparison shots and videos have been compared to showed that Western gamers are really getting the short end of the stick, so much so that in some scenes they reference content that’s been removed from the game. There’s even a video from Censored Gaming showcasing some of the dubbed lines that have been censored for the West.

That’s just one of many clips that have been altered to suit the standards of the West.

Nintendo has been objurgated in a recent campaign called #TorrentialDownpour, lambasting the company for kowtowing to a very strong, but minor uprising in pop-culture known as “Social Justice Warriors”. They’ve also been dubbed by some political sects as the “Regressive Left”, utilizing strong-arming tactics and smear campaigns to get companies and studios to censor content, not unlike the censorious nature of the “Puritanical Right”.

Just recently a cosplayer was forced to cover up her legs at an FGC event in Orlando, Florida after people complained about her outfit to hotel management and staff.

Gamers essentially want companies to go back to simply making the games they want for the audiences that want them. The numbers have shown that those on the Regressive Left constantly attacking developers don’t actually buy the games that they promote, but instead they want developers to change the games and infuse political agendas into popular games that people do buy.

In this case, Tokyo Mirage Sessions #FE was censored in an overwhelming fashion and to a degree that puts the acculturated localization of Fire Emblem Fates to shame.

Before you can run the patch you’ll need to install the custom Homebrew channel on your Wii U. YouTuber Johnny Troche does a fantastic job of walking you through the process in just under five minutes. Check out the video below.

For gamers who want to get their hands on the patch for Tokyo Mirage Sessions #FE, you can download it and the instructions from the GBA Temp forums. Also, keep in mind that there’s a warning about installing the patch to the hard drive and not an SD card, otherwise you could corrupt the game. And as usual, install the patch at your own risk.

If you need help dumping the game be sure to read the Wii U Title Dumper manual from Cyan, which explains what you’ll need and how to properly dump a Wii U game to your PC.

[Update 7/5/2016:] There’s a video tutorial that walks you through each step on how to uncensor Tokyo Mirage Sessions #FE from YouTube user Darkness5539 that you can check out below. It’s only five minutes long so you won’t lose much sleep going over the process.