The Witcher 3: Wild Hunt‘s last and final DLC features all the blood, gore, intrigue and romance one would expect from CD Projekt Red’s fantasy-rich, action-RPG. One of things you probably didn’t expect to see take place is a sex scene amongst the vaporous ether of the clouds in Blood and Wine.

YouTuber RabidRetrospectGames put together a seven minute video showcasing Geralt on an adventure with the mage Syanna in The Witcher 3’s final piece of DLC. The later half of the video is obviously NSFW.

The scene takes place after Geralt and Syanna make a climb up a magical beanstalk where they come upon a decrepit castle with a cloud giant guarding the gates. There’s a fight that ensues between Geralt and the giant, and he’s aided by Syanna.

The duo make quick work of the giant and after felling it the two engage in a rather precarious conversation. Instead of simply leaving and going about their journey, Syanna makes it known that she has other uses for Geralt. This leaves the White Wolf curious as to what it is she’s saying exactly. It doesn’t take but a curt response from Syanna to make it known that she wants a man and she wants to use Geralt for sex.

I’m sure that’s the one thing any guy would love to hear from a beautiful woman.

Players are given the choice to oblige Syanna and allow her to turn Geralt into her play thing while they’re up in the clouds, or they can choose to ignore her advances and continue the journey. In true Witcher fashion, the White Wolf succumbs to the desire to be the first to form the Mile High Club and does so without a plane… like a boss. 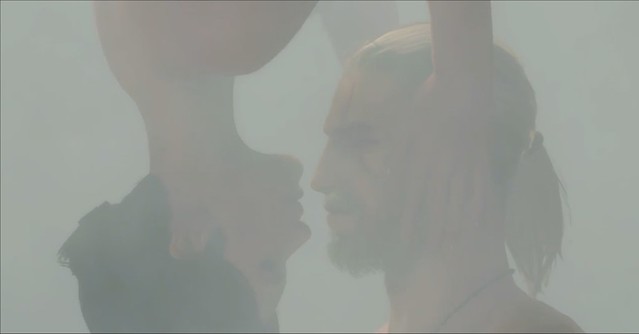 After the deed is done and Syanna gets her fill of a man, she decides to pack up her things and go. What’s funny is that players have the choice of asking if there’s anything else to be said, but she just wanted a taste of Geralt before moving on, quipping that the White Wolf now knows what it feels like for so many other women who get used, abused and left high and dry the day after.

She’d be a real catch on Tinder.

After Geralt gets his man feelings bruised by the callous but direct Syanna, they decide to finish the mission… bruised man-feelings and all.

The Witcher 3: Wild Hunt‘s final piece of DLC, Blood and Wine, is available right now for PC, PS4 and Xbox One for $19.99. Need more info? Feel free to visit the official website.