During this year’s EVO 2016 tournament series after the Mortal Kombat grand finals concluded, SNK Playmore took to the stage and announced that the King of Fighters XIV demo would go live on July 19th. They also unveiled a brand new story trailer for the game.

So first up, the demo will contain seven playable characters, as revealed in the original story. What you probably didn’t know was what sort of modes would be included and what sort of bonuses would come with the demo. You’ll get a free PS4 dashboard theme.

The seven playable characters in the King of Fighters XIV demo will include Shun’ei from Team China, Kyo Kusanagi from Team Japan, Nelson from Team South America, Sylvie from The Official Invitation Team, King of Dinosaurs, Mai Shiranui from the Women’s Team, and Iori Yagami from Team Iori. 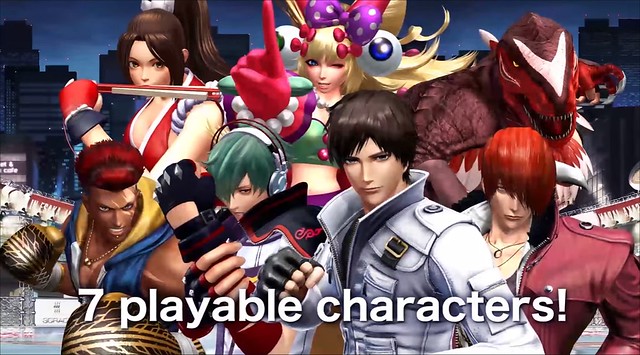 None of these characters are my mains or favorites to play, but if I had to give one a try Nelson would be the one… he seems to be the closest we’re going to get to a revival of Heavy D.

I do have to admit that the demo character cache for King of Fighters XIV is fairly diverse and should give gamers a nice idea of the varied range of different kinds of characters to play.

Ffrom Mai’s quick aerial attacks and screen space footsies, to Sylvie’s unorthodox fighting, to Shun’ei’s power-based specials and Dinosaur’s grapple attacks, you kind of get a wide range of different play-styles and fighters to give you an idea of what to expect from the game. I would have swapped out Sylvie for Mui Mui just to give gamers a more traditional fighter to play-test. Alternatively I would have swapped Iori for King so those wanting a more combo heavy leg-fighter would have an alternative to play against to balance out Nelson’s boxing combos.

Anyway, the demo will feature a versus mode for one or two players, along with a tutorial mode to learn how to play the seven characters.

In addition to the details on the demo, the story trailer finally reveals one of the main bosses in the game and the tournament organizer of this year’s King of Fighters XIV tournament. Check out the trailer below, which aired during this year’s EVO.

It’s interesting because we finally find out that Kukri actually has a strong part in the storyline in King of Fighters XIV. It seems as if the story may involve more than just the typical Orochi bloodline plot that we’ve become accustomed to in the series.

Also, the tournament organizer, Antonov, managed to get his very own trailer, where we see some of his unique grab attacks, his hard-hitting stomps and his powerful upper-body strength on display. This trailer also aired during this year’s EVO and you can check it out below.

Antonov seems to be like a mix between Rugal and a shirtless Maxima.

He also reminds me a little bit of a Texas rendition of Krauser.

You’ll be able to get your hands on Antonov, Kukri, everyone from the demo and the other 41 fighters come August 23rd. King of Fighters XIV will launch exclusively on the PS4.