It’s been reported before that Reddit’s moderators over the /r/gaming and /r/Games sub-Reddits are corrupt. This has been proven when leaked messages from their private moderator group exposed that they had been aiding and abetting some of those caught in said corruption by filtering and censoring content, which was detailed in a report back in March of 2015. The mods are now back to their old ways, censoring content that exposes the current gambling scandal that is rocking the Counter-Strike: Global Offensive community.

Over on Reddit there’s currently a thread on the /r/Games sub-Reddit entitled “[META] Why is the CSGO scandal being swept under the rug?” It has more than 4,600 upvotes and nearly 1,800 comments.

User Mr. Castiglia questions the moderators and why they’ve been actively suppressing and removing submissions surrounding the scandal involving the Counter-Strike: Global Offensive gambling sites and the ties several YouTubers have had to those sites – such as owning one of them – without actually disclosing that information in their promotional videos featuring those sites.

According to the moderator, SirkTheMonkey, the topic was “too far removed” from video games to warrant discussion on one sub, which is one of the largest video game communities on the internet,  boasting 709,000 subscribers. SirkTheMonkey replied to the thread, stating…

“The mods reviewed that video and felt that the focus on a particular 3rd party gambling site was off-topic and broke our rule against witch-hunting.

“The off-topic verdict (Rule 3) is because the topic of specific 3rd party gambling sites is too many degrees of separation away from the game itself. /r/Games is not a catch-all for anything everything related to games.”

The video in question is from H3H3Productions, but his isn’t the only one… there have been multiple videos posted and multiple articles posted of the scandal, but the /r/Games moderators are having none of it. You can view the video below to get caught up on the situation.

Now according to “Rule 3” on the /r/Games/ sub-Reddit, it states…

In this regards, the topic of Counter-Strike: Global Offensive’s gambling community being involved in allegedly illegal behavior while some new information has revealed some of these sites have been running a profiteering scam to defraud users, is not off-topic.

Suppressing this information is no different than the media attempting to turn a blind eye to the multiple sexual assault reports filed during the heinous Cologne attacks that went unreported for a while due to it disrupting the media’s narrative about trying to force cultural integration between refugees from the Middle-East and people living in Europe. This is detailed in a report by Soeren Kern on Gatestone Institute.

SirkTheMonkey feels differently, however, stating that it’s not censorship….

“We aren’t censoring anything, it just doesn’t belong on this subreddit. It’s literally everywhere else. If we had a horse in the race or if we wanted to suppress this news, why the hell would we direct people to other subreddits where it’s displayed prominently?”

According to the Oxford dictionary, the definition of censorship is…

“The suppression or prohibition of any parts of books, films, news, etc. that are considered obscene, politically unacceptable, or a threat to security.”

Even if the mods didn’t want to use H3H3’s video, this news is being covered by every major gaming website, surely a supplemental link to another report of the matter could be allowed?

Nevertheless, according to YouTuber, Josh “JoshOG” Beaver – who has ties to one of the Counter-Strike: Global Offensive gambling rings – he stated that multiple YouTubers and Twitch live-streamers have equity in CS: GO gambling sites, and that this is very common within the community.

Some of the Reddit commenters question if the news suppression by the Reddit moderators could be in response to them having ties to the gambling communities.

The news has been escalating since the initial reports broke, which recently included YouTuber Lewis PsiSyndicate admitting to rigging and defrauding viewers with unboxing videos in order to help promote the site SteamLoto. It turned out that the boxes he “randomly” bought during the videos were actually designed to give him high-value loot as part of a reward for promoting the gambling site.

The mod claiming that it isn’t gaming related is similar to the excuses that the N4G moderators used to suppress and censor some content related to corruption happening within the gaming industry as well, including the ties that a Ubisoft employee had to a PC Gamer executive editor, with the editor promoting Ubisoft’s games without disclosure, and the infamous article by Games Nosh involving Nathan Grayson and Zoe Quinn’s lack of disclosure.

In this particular case, users like Macecurb pointed out that this news regarding Counter-Strike: Global Offensive and the gambling corruption is spread all across gaming communities and makes up for a strong part of the sub-culture, which makes it even more baffling why the /r/Games moderators would censor the news….

“I don’t know about /r/Games, but over on the csgo subreddit the fallout is still going strong.

“You have to understand, gambling scandals in general are unpleasantly common in modern counter strike. Hopefully this will be the one that forces valve/the government to step in and do something about it, but it’s too soon to say.”

It’s certainly not hyperbole to bring government intervention or regulation into the discussion. The acts committed by these YouTubers are clearly outlined in many state laws as being illegal, as well as being against federal advertising regulations.

Moreover, Tom Cassell, one of the YouTubers involved in the alleged illicit activity, was previous warned by the FTC in a previous case involving the XB1M13 campaign by Machinima and Microsoft, and was also later involved with promoting a game he had a financial vestment in without disclosing his ties to the game.

In fact, the entire /r/CSGO sub-Reddit is filled up right now with discussion about the gambling scandal that seems to just keep growing. If you look at the front of the sub as of the writing of this article, it’s centered around nothing but the talk about the YouTubers using illicit means to promote gambling sites they have an affiliation with. 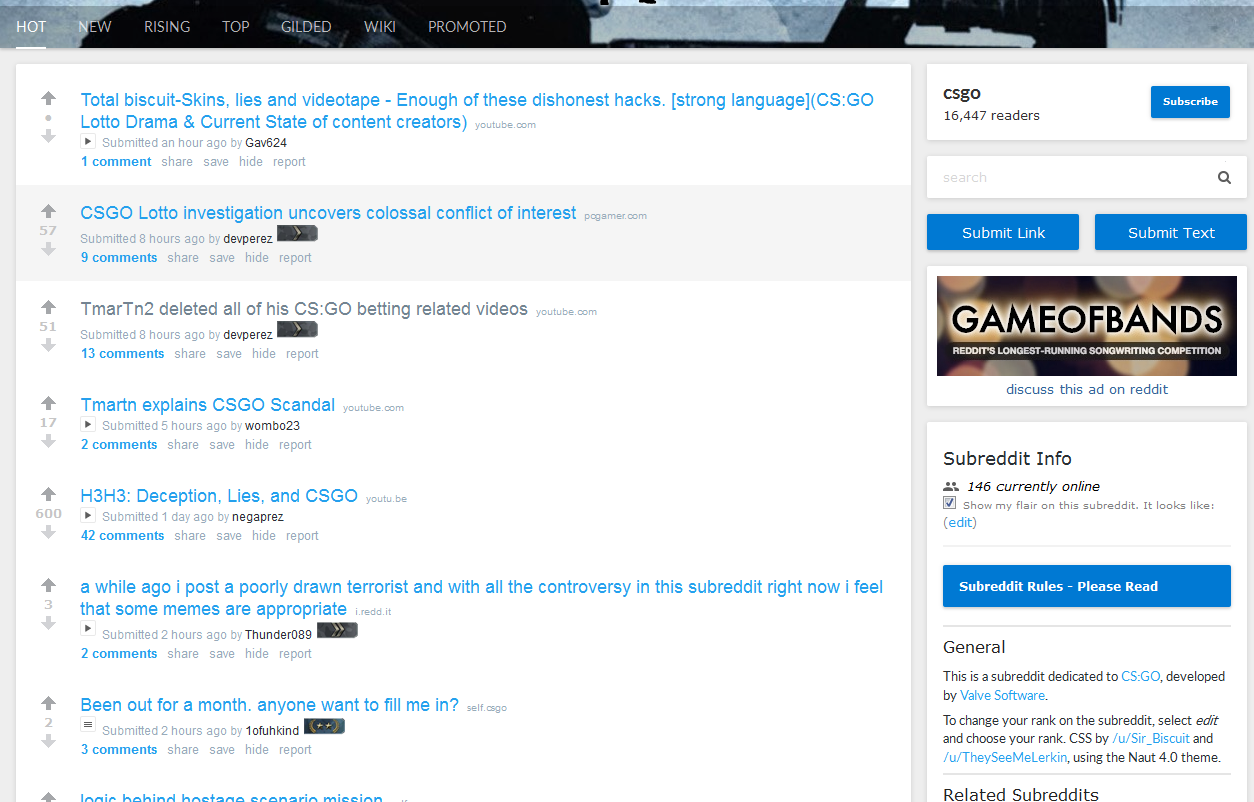 It’s telling that the /r/Games moderators trying to sweep this scandal under the rug while it’s blowing up everywhere else around the gaming sphere. Claiming it has little to do with gaming and too many degrees separated from Counter-Strike: Global Offensive is logically daft given that the gambling sites in question directly interact with Counter-Strike: Global Offensive.

Even the /r/GlobalOffensive sub-Reddit is bogged down in discussing the corruption running rampant in the YouTube community at the moment, especially considering that this activity is illegal… on the federal level. 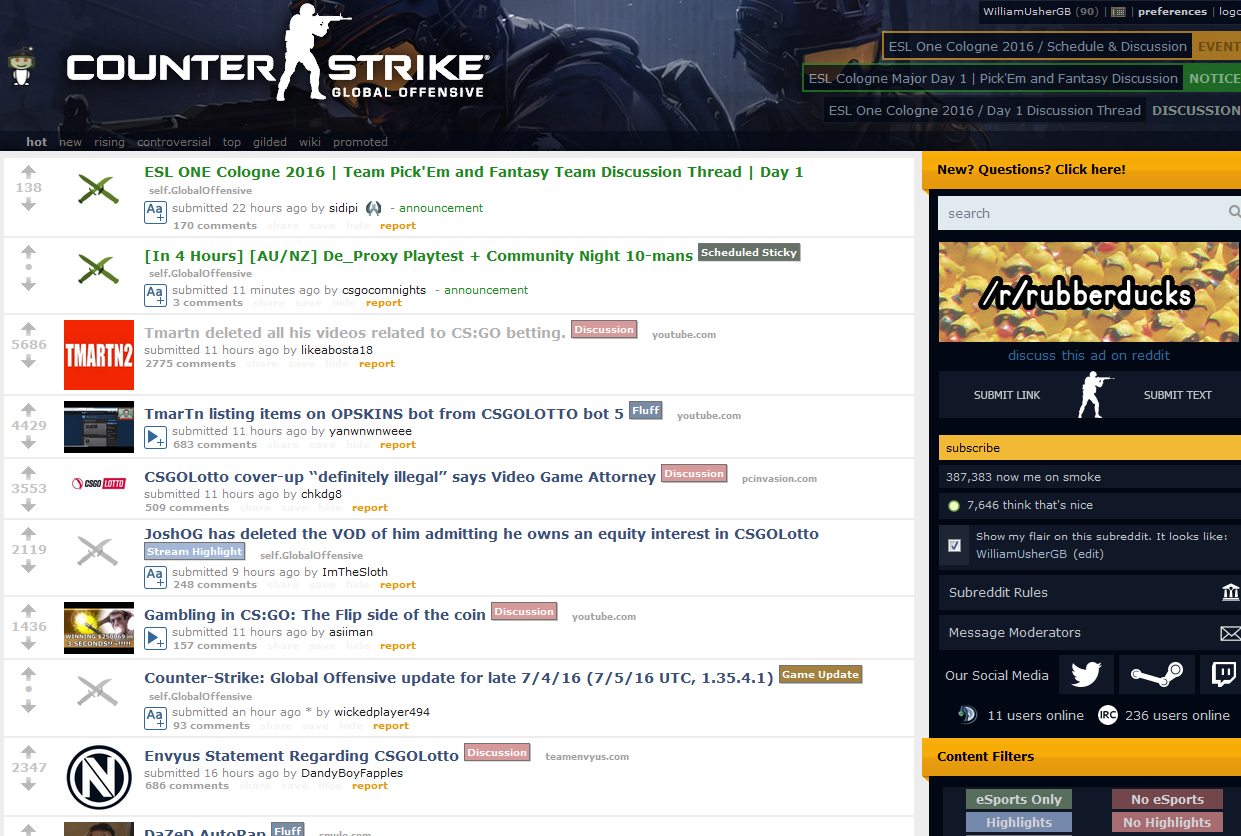 Thankfully, most of the users of /r/Games seem to recognize that the moderators are actively trying to suppress the news from getting out. The meta thread sees a lot of the individuals disillusioned with the moderating by the staff, and are looking for less authoritarian and censor-heavy sub-Reddits to migrate to.

A similar incident like this occurred back in August of 2014 when the moderators of /r/Games and /r/gaming colluded with the Game Journo Pros to censor a video submission featuring TotalBiscuit that had more than 20,000 comments, nuking all of the comments because it dealt with the corruption scandal involving Kotaku, which would later metastasize into #GamerGate.