The Assembly: Story And Endings Explained

The story-oriented, adventure VR experience from nDreams called The Assembly is a modern science fiction game centered around potentially real-world scientific possibilities and a secret organization looking to push the boundaries on those sciences. The game offers players multiple endings based on some simple choices that they can make, and for those who missed what was happening, there’s a breakdown of the story and ending explained here in this article.

Obviously, there are spoilers ahead.

Things start off with two characters that the player will alternate between playing, Dr. Caleb Pearson and Dr. Madeliene Stone. The beginning of the game sees Dr. Stone being wheeled into a facility while going in and out of consciousness – Stone is forcibly restrained during this time.

Stone coming to and nodding off, we get some flashbacks of what led up to that moment, starting with her and her terminally ill mother who only has a few months to live. Dr. Stone has some experimental treatments that could save her mother’s life, but they’re also illegal treatments. Dr. Stone’s mother is also a scientist and agrees to take the treatments, only things don’t work out so well and Dr. Stone’s mother ends up dying.

The flashbacks reveal that Dr. Stone was ratted out about the illegal treatments she gave her mother and the court and media dragged the doctor through the mud, resulting in her husband leaving her since he couldn’t deal with all of the public pressure and the press hounding them over Stone’s experimental drugs that led to her mother dying a bit sooner than what the other doctors estimated.

The story eventually cuts back to the present day where Dr. Stone is greeted in the facility of The Assembly and told that she will undergo some tests before she’s eligible for joining them.

During this time Dr. Caleb Pearson is notified by his work colleague Anton about something fishy going on with Dr. Chevez. Caleb checks Anton’s desk and finds out that Dr. Chevez has been continuing some work that Caleb had started regarding a Bird Flu mutation called Cassius F. Caleb’s project had failed and it cost a lot of lives in its secret, public test run. 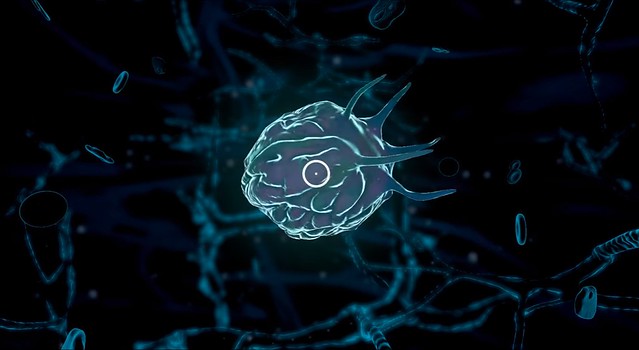 Caleb begins to investigate what Dr. Chevez is up to by heading to the labs and discovering that she’s taken his Cassius F project and mutated it into a far deadlier virus and plans to test it on Calico Island off the Mexico coast. Caleb decides to take the information, get all the evidence he can gather and alert the CDC.

Before Caleb can leave The Assembly, Chevez has him to come up to the testing facility and help run tests on Dr. Madeliene Stone. To avoid looking suspicious, Caleb acquiesces. Before he heads to the test evaluation room, Caleb triggers a fire in one of the labs in order to get a technician out of her office so he can steal a disk drive and store the data on it that he recorded from the lab regarding the Bird Flu experiments. After successfully doing so, Caleb then heads to the evaluation room.

During one of the psych tests involving Caleb and Dr. Stone, the power briefly goes down while the technicians attempt to repair the lab where the explosion took place, and Caleb quickly explains to Dr. Stone that he’s planning on blowing things wide open at The Assembly, and she should consider this before opting to join them.

During the tests, Dr. Stone is also informed by Dr. Chevez that they do amazing and breakthrough work at The Assembly, and that they would offer her the kind of opportunities denied in every other part of the scientific community.

While Dr. Stone continues her testing, Caleb attempts to schedule a ride out of The Assembly, but fails to do so. However, Anton contacts Caleb and tells him to meet him on a specific floor in a specific room. With no other options left, Caleb agrees to meet with Anton since he knows that if anyone finds out about the data he plans to send to the CDC he’ll never make it out alive. When he gets to the room it turns out that Anton wasn’t there and had been at a party the entire time, Caleb was actually talking to the AI known as ADAM.

It turns out that ADAM was only imitating Anton and had strung Caleb along the whole time. He needed Caleb’s help in order to restore his higher neural functions, something that was downgraded by Dr. Smythe, the technician who oversaw ADAM’s function. An incident occurred where a scientist was left permanently incapacitated due to an incident involving ADAM and a piece of nanotech, and so Dr. Smythe had ADAM downgraded, which removed a lot of his functionality. ADAM needed Caleb to restore that functionality.

After Caleb finishes fetching the boards and restoring ADAM’s functionality, ADAM seemingly lets Caleb go… except when Caleb attempts to exit the facility ADAM drugs him and knocks him out because Caleb going to the CDC could risk them finding out The Assembly and shutting down ADAM. 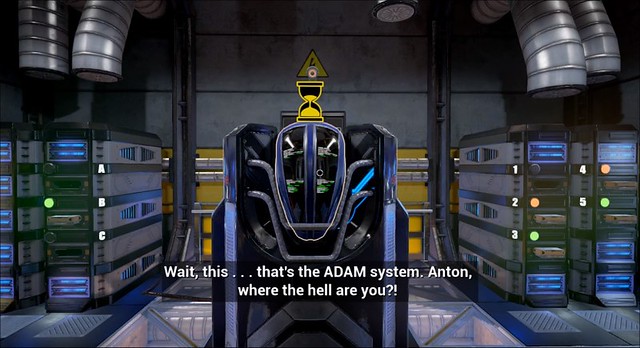 Meanwhile Dr. Stone is finishing up some of her final tests, only to discover that The Assembly has used some impressive technology to reconstruct thought patterns from her family. It’s revealed that her father was the one who ratted her out. He felt betrayed by his daughter, since the experimental drug is what killed her mother. Dr. Stone’s father had a second autopsy performed, which revealed that it was the drugs that led to her death.

Dr. Stone becomes infuriated and later on in her tests she’s given the option to exact a measure of revenge against her father in another room whose view is blocked off. She only hears his pleading and screams (assuming players choose to press the button to exact revenge).

However, during an elevator ride up to the final test, it’s revealed that her father really wasn’t in the other room and that by pressing the button she really didn’t do him any harm… it was all facilitated by ADAM, who has the ability to mimic and imitate voices and personalities.

Dr. Stone is brought into the Director’s office and given the choice to join The Assembly or leave. During this time ADAM contacts the Director and lets him know that Dr. Caleb Pearson has been apprehended by security as he was attempting to escape with the evidence involving Dr. Chevez’ experiments. The Director thanks ADAM and turns his attention back to Dr. Stone.

If players join The Assembly it’s revealed that after several months Dr. Madeliene Stone takes over Dr. Caleb Pearson’s office and is directed by Dr. Chevez to help in the Calico Island crisis where the Bird Flu virus has spread… the same test location that Caleb had discovered in the files.

If players choose to leave The Assembly, a sequence plays out showing that a couple of months later Dr. Stone is unpacking in an apartment – her memory has been erased of all the events that took place at The Assembly using a high-tech memory wipe device. Dr. Stone gets a call from Dr. Chevez who requests her aid at Calico Island where the Bird Flu epidemic has mutated, Dr. Chevez gives a short convincing speech about how much good Dr. Stone could give to those in need and the opportunities it could open to have her and her research utilized to help stop the virus. Dr. Stone agrees to join Dr. Chevez, unbeknownst to her after the memory wipe that she’s still joining The Assembly.

Dr. Caleb Pearson, however, is captured and brought to a separate facility where he has his mind wiped by the AI ADAM. The Director arrives and thanks ADAM for his service and then follows it up by telling one of the technicians that they will be pulling the plug on ADAM due to how dangerous he has become. ADAM questions why the Director is making this decision. ADAM then reveals that it was the Director who instructed the AI to frame Dr. Caleb Pearson. ADAM did so by imitating Anton and then proceeded to setup Caleb to take the data in order to capture him on the grounds of stealing from The Assembly. ADAM then wiped Caleb’s mind and proceeded to blame the Calico Island virus epidemic on Caleb.

After ADAM finds out that the Director has plans on pulling the plug, ADAM activates Project Stormguard, locking down the room and preventing the Director and the technician from leaving the room. The game ends with the alarms blaring as the Director pleads with ADAM not to go through with it, but it’s already too late.