Sega’s Binary Domain was a seventh-gen, third-person shooter about a group of covert operators who infiltrated the isolated island of Japan in order to investigate a robotics corporation called Amada. The game came out back in 2012 for PS3, Xbox 360 and PC. It’s one of the many games that hoped to cash in on the Gears of War third-person shooter craze that was ripe for marketable opportunities back during that day and age. It managed to capture some of the appeal of Gears of War while also infusing some of its own flair into the mold.

The theme of the game centers around a progressive, linear narrative that follows Dan “The Survivor” Marshall and his buddy Big Bo. The meat-head duo start off just outside the walls of Japan and must infiltrate their way into the heart of the city.

The game takes place in the far future, after global warming wiped out a good portion of humanity. Japan was one of the surviving nations that rebuilt their city above the raised ocean level and also pioneered robotics to help speed along the process. However, one creator took things a step further and began developing Hollow Children. Essentially they were robots that looked and behaved like humans, and were given human memories. It’s a little an inverse of Blade Runner, where the synths knew they weren’t human and fought to extend their lives, where-in with Binary Domain the Hollow Children have no idea that they’re actually robots. 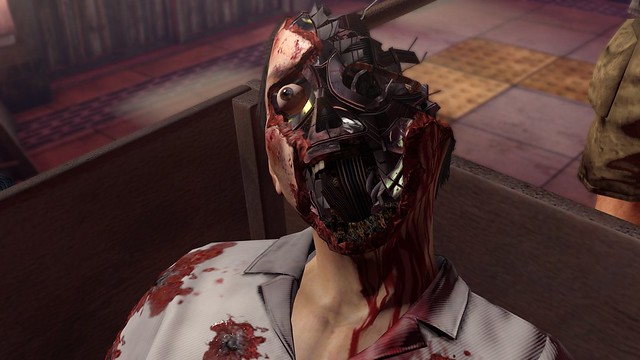 The game threads a line between buddy-up action-comedy, philosophical sci-fi, and a typical B-movie romp. There’s definitely no doubts that this is thoroughly Japanese-made game.

The plot unfolds with Dan – an anti-android mercenary – building bonds with the rest of the international group of mercenaries that he and Big Bo meet along the way, as they attempt to destroy the Hollow Children and find out why they were made at the Amada Corporation. Of particular note is the British special agent, Charlie, who is voiced with quite the convincing performance by Troy Baker. I was shocked at how dedicated to the role Baker was to help bring Charlie to life in both a believable and interesting way. While the voice actor for Dan Marshall hammed it up the entire way through, the rest put in serviceable efforts, with the exception of the Japanese detective, who seemed to play his role as if he came straight out of a serious Japanese drama.

In a way, it’s quite obvious that some of the voice actors were a little more serious about their work than others. Than again, sometimes the dialogue sequences were pretty cheesy, and it was obvious that the best way to get through them was to ham it up. 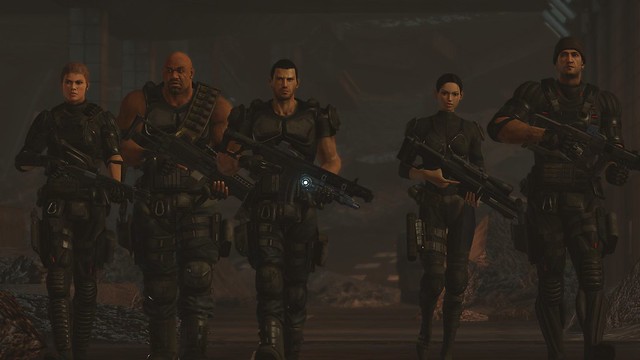 Beyond the presentation factors – which includes decent facial animations and mo-cap work for the time in which it was released – you won’t find much to write home about when it comes to the graphics. It looks serviceable. The lack of physical-based rendering stands out these days given that we’re so used to things like real-time dynamic lights and global illumination, but if you’re okay playing a game without all the bells and whistles from today’s era of gaming, you’ll likely find the graphics enjoyable enough to play through the game.

Where Binary Domain really shines is with the gameplay. It’s not just any ‘ole typical third-person shooter where you dispense of enemies with a headshot and then move on to the next. Since you’re fighting robots a big part of the game relies on where you shoot them, rather than how much you shoot them.

This is where the game feels more like the Terminator game where never got. As the robots utilize various tactical strategies to flank you, surround you, flush you out, or suppress you while melee droids run in for the kill, you’ll have to try to hold them back with your gunfire or your own melee attacks. And while the robots don’t necessarily fear suppression fire, you can use the blind-fire to lay in some shots on the enemies as they approach you, oftentimes without fear. 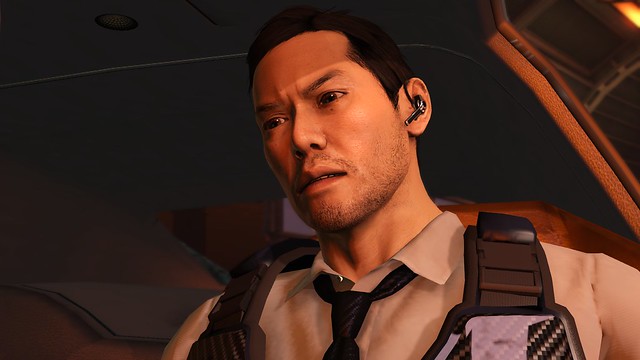 And this is where the game gets intense. You can shoot a robot’s legs out from under them but they won’t stop coming for you. In fact, they won’t stop shooting at you so long as they can see you and have arms to shoot. You can use your weapons to disarm the robots, either by knocking their arms off or shooting their torso to pieces, but so long as they can still move, they will.

This creates a very different dynamic to the gameplay because instead of just trying to shoot your foes until they fall, you’re mostly trying to shoot your foes until they stop moving. Headshots with certain weapons can blow up off the noggin of your electrically powered nemesis, but that won’t stop them from still pursuing you. Some robots will move around aimlessly, shooting at their own side or shooting at whatever is in their way until they eventually fall over and stop working, while shooting out their legs will force them to hop or crawl around after you. If you’re not careful some will latch onto your ankles, attempting to crush you or shoot you if they still have a gun in hand.

This kind of tactical dynamic is something we don’t get often in games, and it really adds an extra sense of playability to the title. 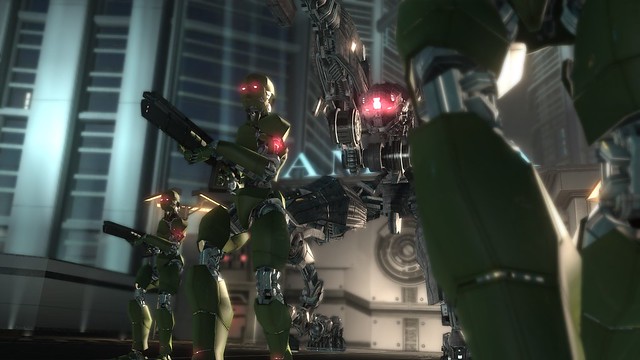 The weapon selection also happens to be varied but not entirely useful. You’ll find that Dan’s assault rifle – once you upgrade it enough – is your best bet for just about any situation, including nearly every boss fight, since it has a special EMP blast that can be used to disable robots temporarily. The LMG doesn’t pack much a punch but does carry a lot of ammo, and the shotgun is extremely powerful but has a criminally short range. Rocket launchers are useful when you can get them, assault rifles are decent enough along with SMGs, and sniper rifles are only really useful for long range combat. Unfortunately you can only upgrade Dan’s main weapon, so you won’t get the benefits of being able to upgrade any other weapon in your stash.

You can, however, upgrade the weapons of your teammates. Throughout the game you’ll be able to pair Dan up with a variety of different mercenaries and soldiers along the way, including a French-talking cyborg, a supermodel Chinese sniper, the two British agents, and a Japanese mercenary. At any single time you can only have two people in your team, so you can alternate between who you want to take with you on each mission. 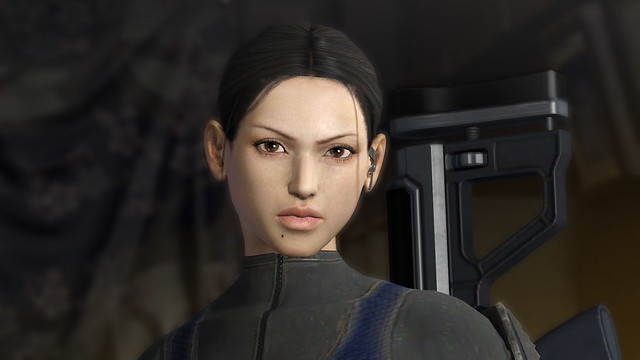 You can roll out real life voice commands to your team if you have a mic, but it’s easier using the left bumper to just respond to their questions or give them tactical orders. The higher you raise your affinity with the team, the better they’ll work with you during combat. Friendly fire or making crass remarks will lower your affinity with the team. It does and doesn’t help at times, but most of the legwork will be dependent on your own skills rather than your AI-controlled teammates. It’s a real missed opportunity that the game wasn’t a three-player co-op title.

The actual gameplay itself feels solid enough. It may take a while to get acclimated to the tank-style turning and aiming, which sometimes feels really sluggish and stiff when facing off against multiple enemies on different sides. If you have a Steam Controller you’ll have to tweak it quite a bit to get it to work properly. If you have an Xbox or DualShock controller, you’ll be in a tough spot trying to tweak the sensitivity so that you can get precision aiming without slow-moving turning. 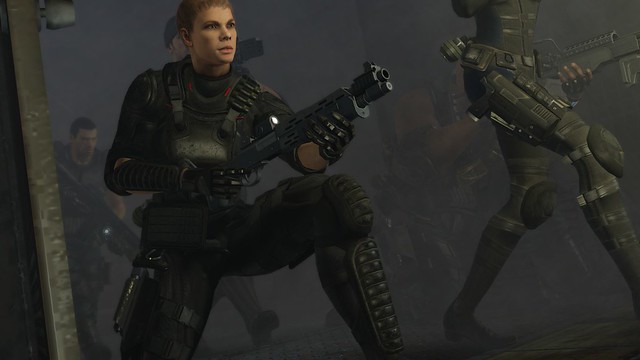 The mechanics are rather limited. You can take cover, perform swat-turns, blind-fire, precision aim with the left trigger, reload and fire the special attack with the right bumper, and issue commands with the left bumper. The digital pad allows you to switch between four weapons: your primary, your pistol, a secondary weapon, and a throwable.

If you double-tap the ‘A’ button on the Xbox controller (or ‘X’ on the DualShock) you’ll perform a roll. You can also hold down ‘A’ to sprint, just like in Gears of War.

Given the limited control mechanics the developers decided to keep the game feeling fresh by having the story move along at a quickened pace with a variety of different levels, challenges and bosses to overcome.

There are times where it really does seem like you’re blasting your way through a pristine Neo-Tokyo once you get out of the lower slums. I do feel as if they missed an opportunity to make the slums look more slummy and war-torn. It was just kind of filled with some debris and a lot of pillars and roadways, but not much that made it look as bad as it could have looked. The upper parts of Japan definitely had the more typical futuristic sci-fi look that we’ve come to expect from the Neo-Tokyo trope. 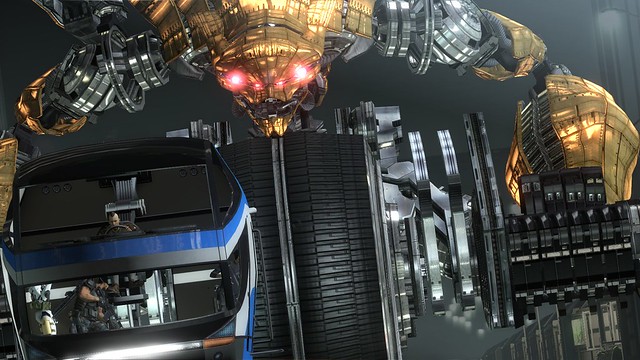 In addition to the campaign mode, which will take you anywhere between six and eight hours to complete, there’s also a multiplayer mode. At this point in the game’s life you won’t find any active multiplayer games going on, whether it be PvP or co-op, but maybe you can get some buddies to join you on your friends list if you decide to create a match.

The PvP is the typical TPS fanfare you’ve come to expect, but the co-op mode is a horde mode that gives you no quarter. You pick from a preset class and attempt to kill robots to upgrade your class along the way with better items and gear. Unlike the single-player campaign you won’t be able to tank many hits, and you’ll go down with just a few shots, thus warranting a strong sense of teamwork if you plan on making it to the higher rounds.

Overall, Binary Domain doesn’t really break new ground, but it does offer an entertaining experience in the third-person shooter genre. It’s probably the best Terminator game to date even though it’s not actually a Terminator game. If someone decided to take the core concepts from Binary Domain and turn it into a proper Terminator game that would be cool, because that Terminator: Salvation game was crap. Anyway, Binary Domain is quite cheap these days, so if you were looking for a single-player, narrative-driven shooter game, the least you could do is…