The Crash Override Network leaks have been making their way around the world wide web, revealing that one of the internet media’s most praised organizations for dealing with abuse and harassment actually turned out to engage in abuse, harassment and doxing. They adopted in action a saying by movie critic Bob Chipman who claimed that there was no such thing as bad tactics, only bad targets.

Well, the chat log leaks from Skype and the card leaks from Trello has revealed that Crash Override Network have been involved in some of the very same things they claimed that they were victims of. Outlets like Heat Street and the Washington Examiner along with Age of Shitlords and AllThink have been giving a bit of attention to these leaked chat logs, but the websites that were praising Crash Override Network as the savior of anti-harassment and cyber-bullying prevention have been abnormally silent about the leaks.

I’ve tried reaching out to some of the journalists who previous reported on the Crash Override Network to inform them about the leaks but many of them have me blocked on Twitter. I did, however, send in some manual requests through the contact forms on some sites, such as Birth.Movies.Death in order to see if they would run any stories about the CON leaks or at least update their previous articles covering the organization, but after a week there has been no response from them.

Birth.Movies.Death wrote a couple of pieces about Zoe Quinn, one of which included a piece dedicated to Crash Override Network, co-founded by Zoe Quinn and Alex Lifschitz. The article about CON was published on January 17th, 2015 by Andrew Todd, where he describes it as…

“[…] the Crash Override Network – and after operating in secret for weeks, it’s gone public, to the hilarious uproar of GamerGaters outraged that there actually is a secret SJW army out there somewhere.

“So seek help if you need it; if you don’t, speak out against harassers and support others in their attempts to do so. Only by standing up to these bullies will we take them down.”

Many of those who use the GamerGate hashtag have been attempting to speak out against Crash Override Network’s documented harassment and doxing, but there has been no response from the media.

I tried contacting Todd specifically about correcting his article or at least considering updating it but I’m blocked by Todd and cannot communicate with him. 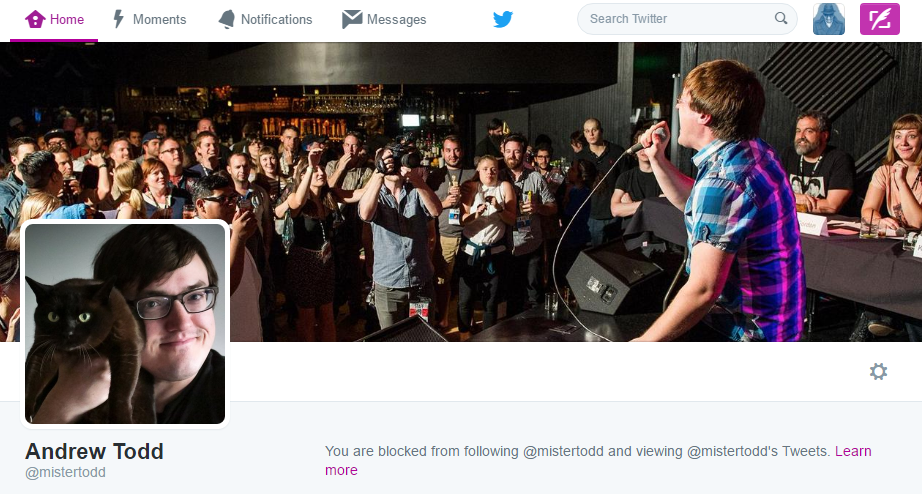 “In the face of harassment, there is no wrong way to feel, Quinn said. Your feelings are valid, and how you deal with the stress of being harassed is unique to you. The slogan of “don’t feed the trolls” is as tired as it is useless, she added — they want your silence.

“The best thing you can do is be proactive. This is a principle her anti-harassment network Crash Override — which recently partnered with nonprofit organization The Online Abuse Prevention Initiative — practices.”

So far Polygon has made no mention, correction, update or new article detailing Crash Override Network and the chat log leaks confirming the corporate sabotage of a $400,000 production by Maker Studios, targeting a Purple Heart veteran, and attempting to dox and incite harassment against people they didn’t like.

Polygon’s editor-in-chief, Chris Grant, was sent the initial press package containing the CON leaks that various other outlets such as Kotaku, IGN, Eurogamer, and even One Angry Gamer received back on August 25th, 2016, but they’ve been silent about the leaks despite their significance.

There are a lot more outlets who wrote about Crash Override Network, attempts are still being made to contact them to see if they have any plans to update their articles or inform their readers about the nefarious behavior that has been exposed by the supposed anti-abuse organization.

At the moment, sub-Reddits like GamerGhazi are working in overtime to scrub and delete any mention of the Crash Override Network leaks, as archived and evidenced by the deleted threads that were recovered by Reddit user lucben999.