2K Games released a new trailer just ahead of the launch of WWE 2K17 for the PS3, PS4, Xbox 360 and Xbox One. The trailer is actually a beginner’s guide that teaches long-time fans and newbies alike how to control and play their characters in WWE 2K17.

Entertainment Buddha did a post highlighting the new video that highlights the basic controls over the course of four minutes. You can check out the video below.

So you move around with the left stick, which is standard fare wrestling controls. L1 (or the left bumper) gets you in and out of the ring. Tapping the left bumper puts you on the apron while holding down the button will take you from the ring all the way to the outside.

The left trigger is to run, and you can run and tap the left bumper to slide out of the ring. Running takes stamina so you can’t run around the ring forever.

Square, or the ‘X’ button on the Xbox controller, is to perform basic strikes. Rapidly tapping the strike button will allow you to perform a combo.

Very similar to AKI’s WWF games, if you hold down the strike button – Square or the ‘X’ button – you will perform a strong strike. The strong strikes usually knock an opponent down and take extra health.

You can perform different attacks based on pressing the strike button and the left stick for directional attacks.

Holding down the right trigger while in the front facelock will allow you to drag an opponent around.

Combining moves like running with the left trigger and pressing the strike button will perform a running strike attack. These can be done coming off the ropes, in corners or while an opponent is on the ground.

Irish whips are performed by tapping the Circle button (or the ‘B’ button on an the Xbox controller) while using the left analog to direct them in the direction you want. You can press the strike button to perform an Irish whip attack or tap the grapple button to do an Irish whip slam or grapple move. 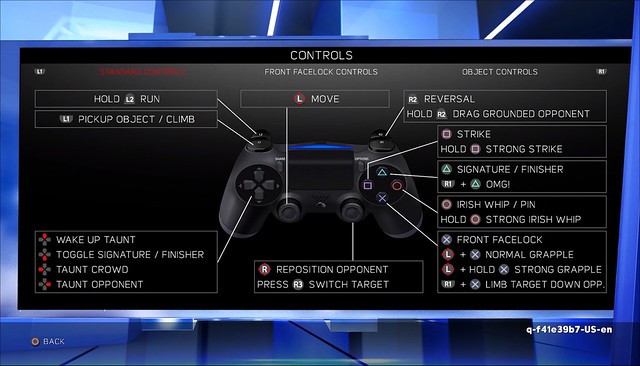 Holding down the Irish whip button while near the ropes will throw your opponent over the top rope.

You can counter grapple moves using the right trigger when the prompt appears over the wrestler’s head. You have a limited amount of reversal slots, so use them wisely. The reversal slots will recharge over time. 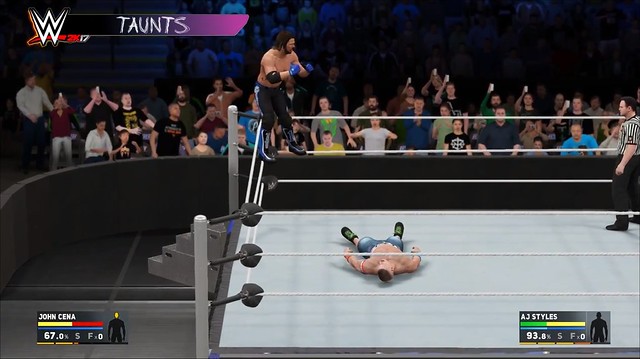 Different taunts have different effects, which is kind of cool. Tapping up on the D-pad will perform a rising taunt, which will cause opponents to stand up and buff your character.

Tapping right on the D-pad will give you a damage buff and make grapple and strike attacks slightly more powerful.

To pin a downed opponent, simply tap Circle or the ‘B’ button if you’re playing on Xbox.

An alternative to taking out an opponent is using a submission move. You can perform three different types of submission attacks, including normal, signature and finisher submissions. You can use a normal submission by tapping ‘X’ (on PlayStation, ‘A’ on Xbox) when an opponent is grounded.

Normal submissions aren’t really designed to submit someone but they’re great for wearing an opponent down. Signature submissions can be performed by tapping the Triangle button (or the ‘Y’ button on Xbox) when your opponent is grounded. 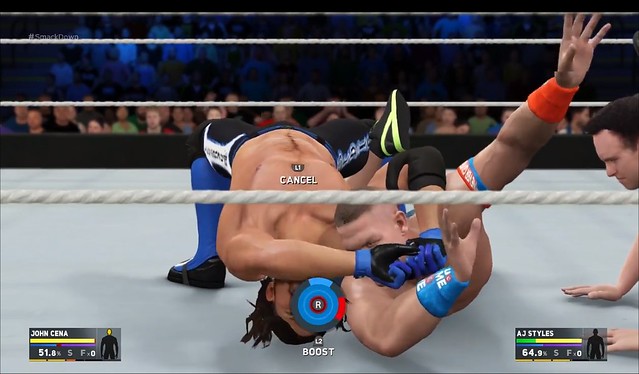 There are two different ways to execute submissions, one is by using the right analog to overlap your opponent’s bar while they attempt to avoid being overlapped. If the aggressor keeps the defender overlapped until the meter fills up red, then the person gets submitted. If the defender manages to evade being overlapped and the meter fills up blue, then the person escapes the submission. It’s like a little mini-game where a circular icon appears and one player tries to flee while the other tries to capture.

The second submission mechanic is a button mashing mini-game. It’s a quick-time segment basically, where different button prompts will appear and the aggressor must quickly tap the button on screen until the meter fills up red in order to submit an opponent. As the defender, you must quickly tap the button to avoid being submitted and if the meter fills up blue, then you’ll escape.