In their own little way, outspoken artist Frank Cho and media-condemned Italian artist Milo Manara, have continued to make strides in giving SJWs a middle-finger. Whether you follow comic books or not, there has been nothing but article after article about the way females are depicted in comic books. Millenial Social Justice Warriors have been coming down on comic artists for aggressive displays of navel, tight clothes, big boobs, shapely hips, long legs – frankly anything that men find attractive.

Well, two artists have been chipping away at the threshold of the SJW zeitgeist by doing one picture or comic cover after another that challenges today’s sensibilities toward comic book censorship. In a not-so-private congratulation of standing steadfast against SJW pressure, artist Milo Manara gave fellow comic book artist Frank Cho a cheeky drawing of Spider-Woman in an outfit so tight that pregnant women giving birth manage to be more modest than the curve-hugging spandex sported by the voluptuous super heroine. 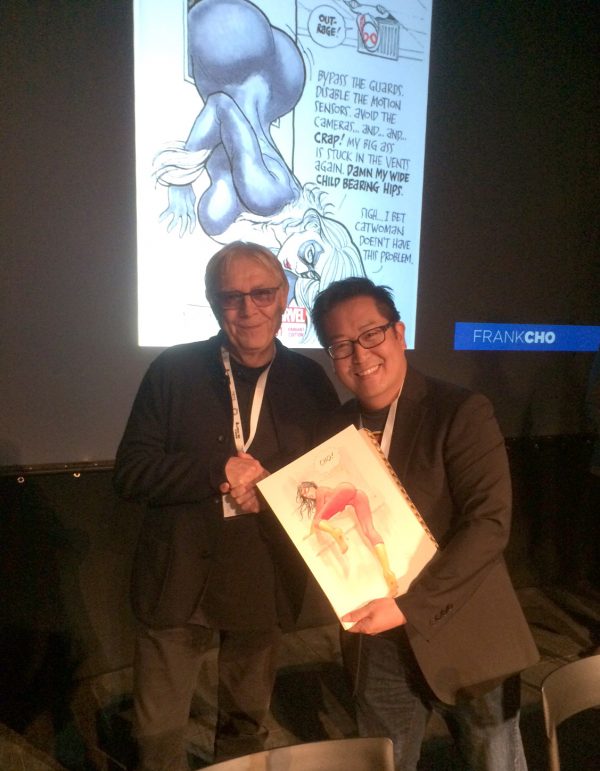 The image was recently posted up by Bleeding Cool when the two artists met at an Italian comic book convention in Luca, Italy.

The water painting was exchanged in the auditorium, which reportedly erupted in cheers given the anti-SJW theme of the painting.

But I’m sure some of you are saying “WTF does this have to do with SJWs and why are comic artist starting to fight back against censorship?”

Well, as Bleeding Cool reported previously, Manara came under fire for another Spider-Woman cover that created such an uproar they had to pull the cover. Cho has repeatedly been in the news for things like showing a little bit of the underskirt of Wonder Woman, which erupted in plenty of headlines featuring misogyny and sexism and the patriarchy and all those other buzzwords that millennials throw around.

The whole Wonder Woman panties thing involving Cho was summed up by Comics Beat. An image below shows what people got all riled up about. The one on the left is the original, which shows a bit of Wonder Woman’s super panties (which is just part of the leotard), and the one on the right is the edited version after people complained it was sexist to show the hero’s underoos. 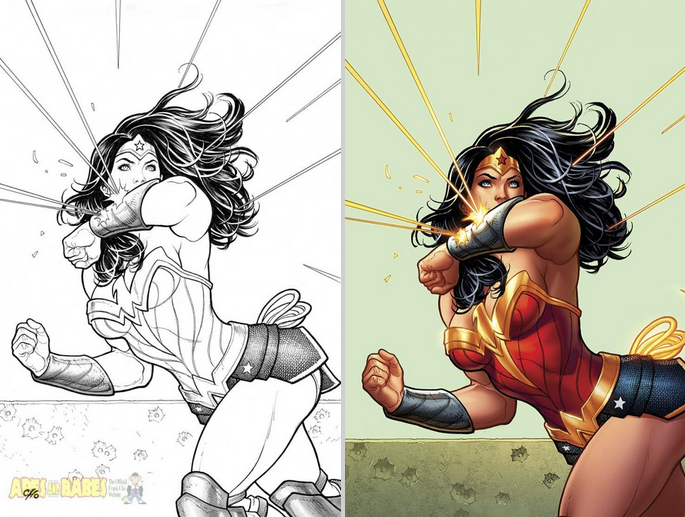 Anyway, Manara and Cho have been fairly vocal about all this nonsense, and a lot of comic fans either have to succumb to the invasion of Social Justice Warrior ideology or fight back the way some gamers did with #GamerGate.

For those who don’t know, SJWs tried getting a number of games censored or banned, such as Hatred and GTA V. They tried getting Minecraft banned in Turkey under the false premise of inciting violence against women, as reported by VentureBeat. They had Obsidian remove a fan’s epitaph in Pillars of Eternity because they called it transphobic, as reported by The Ralph Retort. SJWs forced Larian Studios to censor the boob-plate in Divinity: Original Sin. The SJWs have also been running to the United Nations to get them to censor games in Japan, as reported by Niche Gamer.

Some of the calls for censorship have partially worked, given that Bandai Namco recently censored Sword Art Online: Hollow Realization after the game had already been rated.

For those that don’t kneel to SJW despotism, they have been getting absolutely lambasted for any depiction of sexuality or sensual femininity in their games, such as Koei Tecmo’s Dead or Alive Xtreme 3, which was called a “sexual assault simulator”.

Koei Tecmo didn’t even release Dead or Alive Xtreme 3 in the West because they wanted to avoid SJW bombardments altogether.  Back in 2015 they stated in a Facebook post…

“We do not bring DOAX3 to the west and won’t have any plan change in the future. Thank you for asking.

SJWs tried lying and saying that Koei Tecmo didn’t want to release the game in the West because it would sell too poorly, even though Koei Tecmo releases a lot of games in the West that don’t sell very well, such as the Nobunaga’s Ambition series, which barely moved 30,000 copies, according to Steam Spy.

If they were worried about low sales then they never would have bothered spending the money to localize Nobunaga’s Ambition for the West, which has a far smaller market niche than Dead or Alive Xtreme.

And for reference, Dead or Alive Xtreme 2 sold 150,000 copies in North America on the Xbox 360 a decade ago, according to VGChartz. I’m pretty darn sure sales wouldn’t have been a problem for DOAX3 had they released it in the West.

Anyway, a lot of people have been saying that a #GamerGate is bound to happen in the comic industry. It’s a little tough to say because gaming had a lot of corruption in the media, and it was the compounding calls for censorship from the media and their blatant breaches of federal regulation and illicit activity that got so many gamers riled up.

In the case of the comic book industry, if it’s just media outlets calling for censorship (and no further corruption beyond that) then it may be more difficult to get a fire burning in the hearts of comic book fans that challenge them to fight back against the SJW academics and millennials with the rage of an Otaku fan whose Super Sonico body pillow was taken by his born again, eunuch father.