If you have plans on getting some friends together and playing a few rounds of Devolver Digital and Free Lives’ Genital Jousting, you won’t be able to stream it live from Twitch.tv. The game has been banned from the live-streaming service.

Censored Gaming was quick to get on the case, announcing via Twitter that the party game featuring penises penetrating anuses in a variety of race modes, battle modes, and ball modes, made the list of prohibited games that cannot be streamed on Twitch.

The list grows, Steam’s “Genital Jousting” has been added to the @Twitch List of Prohibited Games https://t.co/t2RuXDYKL7 #Twitch pic.twitter.com/KPxHV5c3u1

If you check the list of banned games over on the official Twitch website, you’ll see that sure enough under the alphabetical ordering of ‘G’ you’ll find Genital Jousting. Twitch has zipped the game up tight in the pants of censorship. 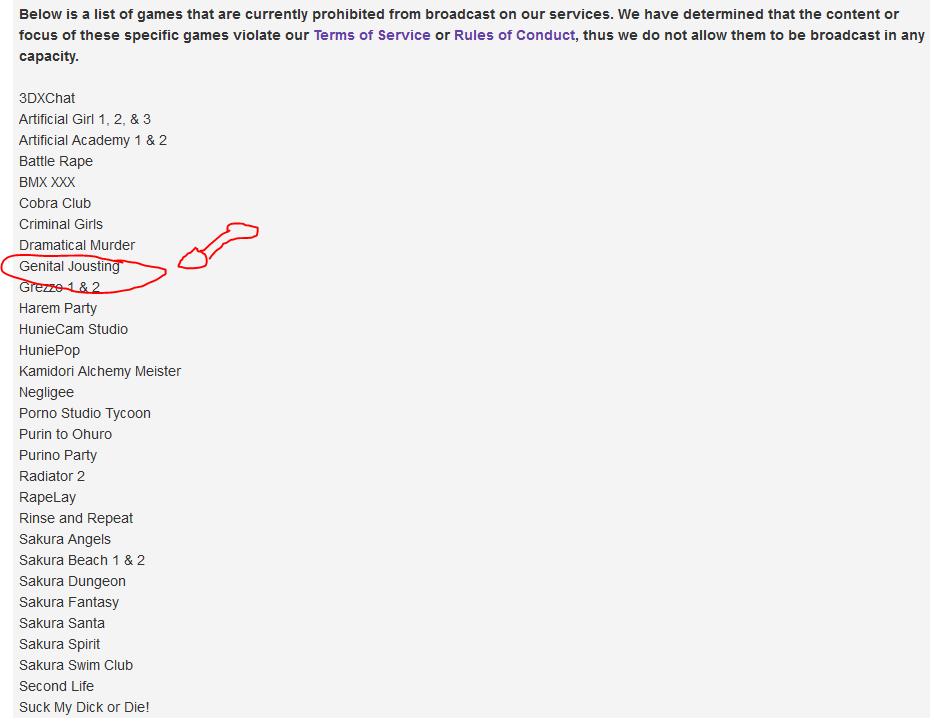 This list also includes games like Hatred, Manhunt 2: Uncut and the director’s cut of Indigo Prophecy. Other games like Yandere Simulator also make the cut, along with Second Life.

Twitch has never been very clear or forthcoming as to why AO-rated games that don’t contain nudity or sex are prohibited from being live-streamed on the service. They seem to just make the rules up as they go along and have opted out of actually responding to e-mails and Twitter requests to further explain why some games are banned.

Technically, Genital Jousting doesn’t contain anatomical human nudity, simply male genitalia and an anus attached to the end of the scrotum. You can penetrate the anus and even ejaculate inside, causing the genitalia being penetrated to ejaculate as well. It’s all showcased in a gameplay trailer below that’s probably not safe for work.

Genital Jousting features a variety of game modes centered around the flaccid Johnsons and “wiggly” fudge factories. Some modes include penetrating opponents as quickly as possible, while others are about making your way through obstacle (inter)courses.

The game is obviously not designed for people who hate looking at limp dicks but if you’re into customizing lemonade strudels, you just might enjoy Genital Jousting the same way you might like Mount Your Friends.

Anyway, the game is currently in Early Access and it’ll come out as soon as the developers finish up on the back end. They don’t want it to release too early, so they’re going to put in a bit of time and unload the game onto the public sometime during the front half of 2017. They’re trying to avoid getting stuck in the tail end of the year, because it gets crowded back there with a lot of big releases.

For more info on Genital Jousting you can visit the Steam Early Access page.