If you game on PC then you have no shortage of mods for a wide variety of games. It’s the opposite of console gamers, who are beholden to the gatekeepers of DLC if they want to get their hands on new outfits or experience new stages or play the game via a total conversion. For Dead or Alive 5: Last Round gamers, this rings especially true given that on console and PC the game is filled to the brim with expensive DLC, but PC gamers get the added benefit of downloading new outfits, textures, meshes and character overhauls thanks to mods. And one of the latest mods to gain some traction is an Adidas micro-bikini mod for Mai Shiranui.

It’s funny that Dead or Alive 5 is still so popular on PC despite having released back in 2015. One of the things keeping the game in the spotlight with gamers is the crossover DLC character from SNK, Mai Shiranui.

Modders have gone over and beyond to give her a wide assortment of stylish new outfits with snazz and panache. One of those outfits is a referee-themed micro-bikini from Adidas. Modder majornew put the mod together, featuring Mai in the dental floss-style string bikini that just barely covers the pugilist’s naughty bits. 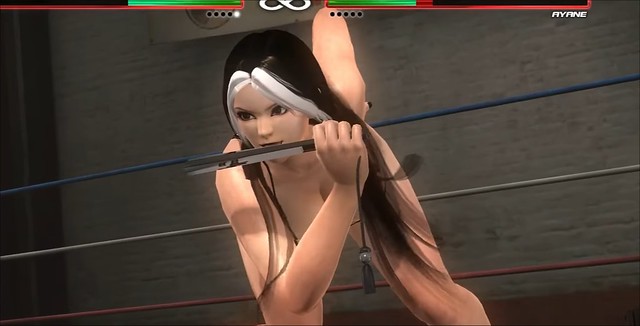 The thong micro-bikini has a default black and white themed referee motif, but it also comes in three additional colors, including blue and white, purple and white, and red and white.

Each of the thong bikini sets features a matching fan with a custom texture on it that reads “I Love New Metal”.

The theme of the mod gives Mai a very goth-like appearance, with white strands flow down the front of her hair while straight raven locks fill out the rest of her head. You can see the new mod in action as she battles it out against Ayane thanks to a video put together by GameplayGuy.

You can download the mod for the PC version of Dead or Alive 5: Last Round right now by grabbing the mod from the Openload.co link on the DeviantArt page.

If you aren’t fond of the Mai goth look there’s also an alternate mod put together by huchi001 that alters Mai’s face with a custom look. You can check out the image compilation below to see what the new custom face looks like.

If you like what huchi001 has put together for the curvaceous ninja, you can download the mod for Dead or Alive 5: Last Round by grabbing the file from the Google Drive link on the DeviantArt page.