Nexon and developer Cwavesoft announced recently that starting this weekend on January 27th, gamers will be able to get their first opportunity to experience Hyper Universe in a hands-on session at the Nexon setup via booth 11854 at PAX South in San Antonio, Texas.

I know a lot of people are getting tired of MOBAs here and MOBAs there, and lots of free-to-play MOBAs everywhere, but Nexon and Cwavesoft are at least trying something new with Hyper Universe. The game allows players to team up in deathmatch battles across various levels where they’ll have to battle and defeat the opposing team and claim victory.

There are six different character classes, and multiple characters per class. There are seven levels they plan to roll out at launch with more on the way. Each team will have to defend their turrets and take down the opposing team’s turrets.

They released a cinematic a while back to give gamers an idea of what they’re gunning for.

As you can see, it has a lot of visual similarities to a Pixar film and Overwatch. Also, Cwavesoft was not above adding in jiggle physics and skintight clothing. I also tend to doubt they’ll be making headlines for butt poses and the sexual orientation of their anatomically incorrect robots.

One thing that definitely stands out is how inviting they’ve made the characters look. Visually they pop, just like Overwatch, but there’s a bit of a tinge of Asian motifs there, reminding me a little bit of a King of Fighters mash-up. The one chick in the power armor and zero-suit is obviously a mix of Nova from StarCraft and Tracer from Overwatch. They have a fake Mega Man X robot, a Ms Marvel clone, and a few monsters and other creatures that look like the friends of the cousins of characters from League of Legends and Dota 2. 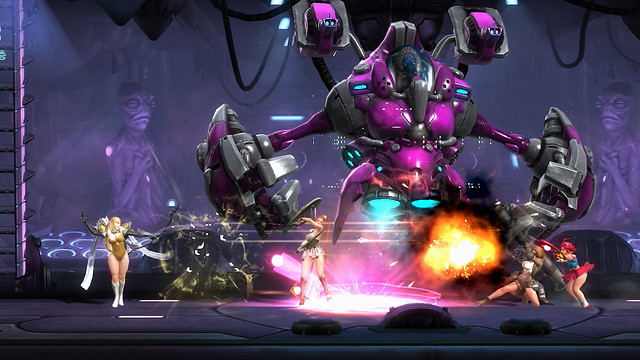 In one of the screenshots it looks like there’s a chick in there who mirrors Lara Croft.

The thing is, great character designs will only take you so far. As we saw with Battleborn, you need to be able to introduce them in ways that make people care. You need a cool soundtrack. You need compelling levels, and a side-order of world building wouldn’t hurt either.

So far, Cwavesoft at least has a cool looking premise for their MOBA. A side-scrolling, platforming, beat-’em-up shooting game is a cool way to go about it. If the game is actually fun then they could easily have a smash hit on their hands. You can play test the game for yourself when it becomes available at the booth at PAX South this weekend.