If you really, really, really like Noctis from Final Fantasy XV and you can’t get enough of the leader of the boy band who goes on a desperate, daring and ultimately doomed adventure to get married to Luna, then you’re going to love this new mod for Dead or Alive 5: Last Round on PC.

Modder LGMods designed a bundle mod pack featuring Noctis from Square Enix’s Final Fantasy XV. The pack contains five outfits… although, the fifth outfit is more like a non-outfit since it sees Noctis in nothing but a glove on his left hand, his boots and uh… nothing else.

LGMods took some meshes from a few other people in order to give Noctis his… elongated manhood. And by elongated, we’re talking nearly down to his knees and dangling like a snake hanging from a willow tree.

However, if you don’t want to be distracted with a hotdog falling out of its bun and slapping people in the face while Noct jumps and leaps around during battle like a cat recklessly throwing its tail in your face, then there are four other outfits that keep the rock and pebbles of Noctis fully covered behind some threads.

YouTuber Frank leo showcases Noctis doing battle in Dead or Alive 5: Last Round in two of his outfits, including Noct’s black shirt, pants, boots and jacket, as well as his alt outfit featuring him in his t-shirt.

Frank Leo didn’t go all in, though. He forfeited showing off the shirtless version of Noctis and, of course, birthday suit Noctis, who doesn’t seem to have any problems keeping the Leviathan tamed.

You can see what all five outfits look like in the image below. It’s censored for the sake of sparring little Timmy’s eyes and baby Jane from witnessing Noctis’ untamed “Omen”. However, if you click on the image below you’ll be taken to the fully uncensored version… where Noctis shows off the true power of the crystal’s endowment. Warning: clicking through the image is NSFW! 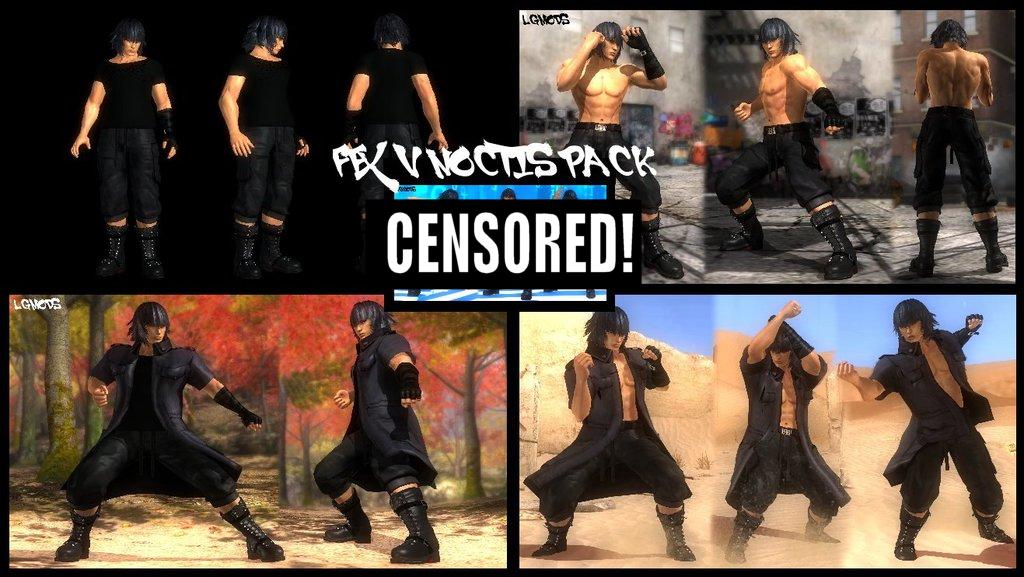 Now that your desires have been satiated and the power of your crystal’s curiosity drained, it’s likely time to seal this deal with a download link.

You can download Noctis from Final Fantasy XV for Dead or Alive 5: Last Round from over on the LGMods DeviantArt page.