With AMD’s new Ryzen 7 processor line set to be made available on March 2nd, some reports are emerging that Intel has gone on a discount spree. Hot Hardware is reporting that that some of Intel’s CPUs have been marked down between 25% and 35% off.

Select processors from Intel’s i7 and i5 line are discounted right now over at Micro Center. It’s no joke. It appears as if Intel wants to curb some of the enthusiasm for AMD’s new affordable and high-powered Ryzen CPU, which – according to internal benchmarks – outperformed the i7 in multi-threaded tests. As you can see below, the savings on Intel’s CPU range from the double digits to the triple digits. 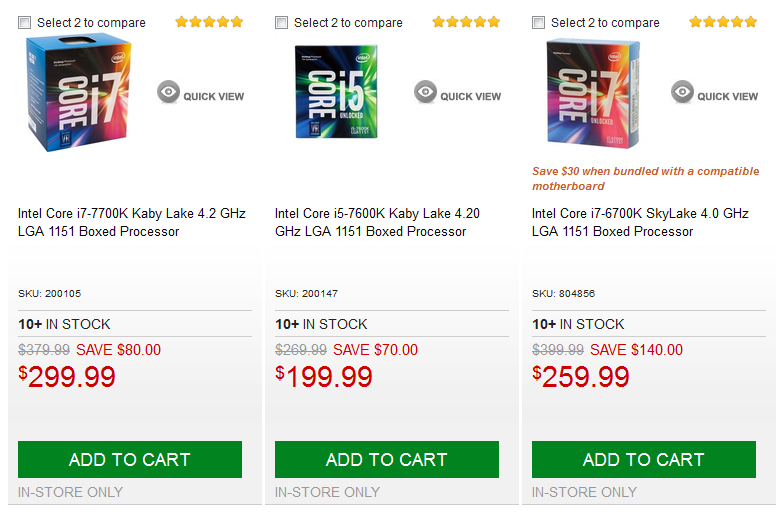 They’ve even marked down the measly little i3-7100 by $15, assuming you want an effeminate processor daintily nesting inside your motherboard’s socket while you surf Pinterest and update your Tumblr blog.

However, strong Johns and big Janes will likely want some real muscle under the hood. They want a thick, throbbing cache of power pipeline power and a processor with muscled-up cycles that would make silicon blush if it had cheeks. That’s why a lot of people are already placing pre-orders for the Ryzen 7. They want those gains.

The Ryzen will launch in three different formats on March 2nd, where the octo-core brand sporting 16 threads will be made available starting at $329.99. The CPU scales up to $499.99, where it features 4GHz per core. You’ll be rocking one super mean machine.

However, we still don’t know exactly what the real-world benchmarks are like, and we won’t know until independent benchmarkers get their hands on the new Ryzen CPU.

Meanwhile, Intel seems to be sticking with the discounts for their brands, and Hot Hardware is noting that some of these discounts have also extended over to Amazon, but the discounts aren’t quite as steep as Micro Center. Even still, it’s pretty obvious Intel is shaking in their boots. Now all AMD has to do is follow-up with a really good, solid, affordable GPU with some comparable power to the GTX 1080 and we could be seeing them make a huge comeback in 2017.