Red Barrels’ Outlast 2 won’t be released in Australia for home consoles and PC. The game was refused classification by the Australian Classification board as part of the Department of Communications and the Arts.

“The computer game is classified RC in accordance with the National Classification Code, Computer Games Table, 1. (a) as computer games that “depict, express or otherwise deal with matters of sex, drug misuse or addiction, crime, cruelty, violence or revolting or abhorrent phenomena in such a way that they offend against the standards of morality, decency and propriety generally accepted by reasonable adults to the extent that they should not be classified.”

So basically, this means that Outlast 2 won’t be appearing on any store shelves in the land down under. Aussies will have to get their copy of the game from digital distributors.

This isn’t too surprising given that Australia – despite having a new R18+ rating to throw around for mature games – is usually quick the pull the trigger of censorship whenever it suits them.

What is surprising, however, is that GamesIndustry.biz points out that the Outlast 2 demo was actually rated and classified by the Australian Classification board.

Sure enough, if you search up Outlast 2 you’ll find an entry specifically for the demo on the Classification website. 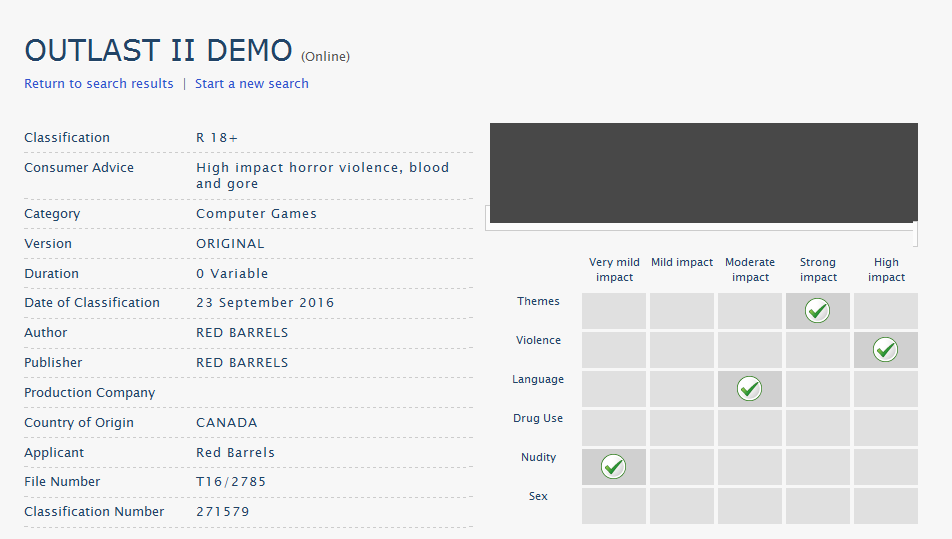 Apparently the difference between what was featured in the demo of Outlast 2 was different from the extremes that were taken with the full game, and Australia said “Nope!” in response.

We can’t really know what was in the game that the board found so objectionable that it couldn’t even receive the X18+ rating, which is ironic given that the whole point of that rating is for material too mature for those under the age of 18.

Anyway, Outlast 2 is due for release on April 25th for the Xbox One, PS4 and PC. But it won’t be available in Australia.