We get a really solid look at Themyscira in the newest trailer for Wonder Woman. It covers Diana’s origins on Paradise Island, as well as her training, how she got good with the sword, and her magical bracelets. We still don’t really have a solid grasp on who the actual villain is, but hopefully that’s being kept a secret as opposed to simply lacking direction.

The trailer spends a good majority of its time setting up Diana’s origins, getting viewers to connect with her as character before they push her off into the heroics. It’s not the most groundbreaking of storytelling based on what they’ve showcased, but it seems to be feasible enough to get the job done as a narrative vehicle to move Wonder Woman from her beautiful little island to the gritty and grimy streets of London.

There are a lot of great visual scenes in the trailer, and they really seemed to capture the period quite well. There’s also a great contrast between the soft, tropical palette of Themyscira and the dark, grayish tones of London. You get a real sense of dread when Diana and Steve make it back to his home.

The trailer does a decent job of staying on point. Keeping itself focused and linear no Diana as a character.

I do worry about the film in today’s climate where identity politics have taken over thanks to the biased mainstream news media and a lot of social media networks heavily pushing for segregation through ideologies.

So far the film has avoided taking any sides in that discussion, despite the fact that it would seem like an easy thing for it to dive into given the topic matter — you know, Diana’s origins and her interactions with the world of man. Nevertheless, Wonder Woman‘s marketing campaign has managed to capture the attention and adoration of the entertainment community by steering clear of the identity politics powder keg. But will the media see it that way?

If the media overplays its hand of pushing Wonder Woman as a piece of propaganda for third-wave feminism, they could easily cost the film its audience. The same thing happened with the 2016 reboot of Ghostbusters, where the media continually and incessantly turned the film’s marketing campaign into a gender politics debate. It easily turned off plenty of potential moviegoers who didn’t want to have to deal with being called a “sexist”, “bigot” or “racist” for not toeing the media’s party line.

So far DC has played it straight with promoting Wonder Woman; safely and cautiously navigating the minefield of gender politics by simply not talking about it. It’s managed to keep them out of the media’s cross hairs for controversy, and I imagine they’d like to keep it that way up until the movie’s release this summer in June. 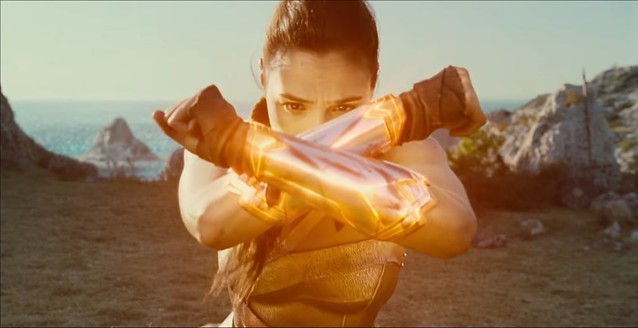 This is also probably a huge deal for them because DC and Warner Bros., have so far failed to really hit a home run with their live-action movies, especially in comparison to Marvel. Wonder Woman could be their first major blockbuster hit that actually scores positive praise from critics and resonates strongly from moviegoers who aren’t diehard Batman fanboys.

We’ll see if they can continue to focus on promoting the film as a character driven action-drama and avoid all the sticky pre-release mud that bogged down movies like Batman vs Superman or the gender politics that turned films like Ghostbusters into a topic with which movie fans show little more than scorn.