Yooka-Laylee Kickstarter Backers Ask For Refunds While Devs Get Defensive

Team17 and Playtonic’s community managers have been running damage control on the Yooka-Laylee situation involving the removal of JonTron for comments that were made during a live-stream debate. On the Steam forums users complaining about the developer’s decision to remove JonTron from the game are being met with censorship and bans. When users ask for refunds on the Kickstarted project they’re being met with stone walls.

Over on the Playtonic forums, one of the staff named Taylor explained…

“Playtonic do not have to refund you. There is no law or requirement for them to do so.

“You can try using the Backer messaging system on Kickstarter to discuss a refund. Playtonic, out of their own will, have chosen to refund backers that opted for the now discontinued Wii U version through this system. However, there is no guarantee that they will (and I don’t think they should) refund you for this situation.

“I am locking this thread.”

@golden_villista @ZodaSoda I run a Yooka-Laylee forum, not a JonTron one.

Mister Metokur did an 11 minute video showcasing some of the locked and banned threads on the Yooka-Laylee forums before they were removed.

Over on the Kickstarter page there are lots of people trying to get in contact with Playtonic for refunds, but are being shooed away for their efforts.

This all came about due to Playtonic deciding to remove JonTron as a side-character in the game Yooka-Laylee after being pressured by the members of NeoGaf to do so. Part-time contributor to One Angry Gamer, Nick Monroe, did a little bit of investigating and found that it looked like a coordinated effort by a journalist from GamesIndustry.biz and NeoGaf to get Playtonic to distance themselves from JonTron.

This all came about due to comments JonTron made during an impromptu live-stream debate with another content creator. One of the more infamous and controversial lines that was used was based on a mimetic infographic, where JonTron inferred that “wealthy blacks commit more crimes than poor whites”, as reported by Crave Online. 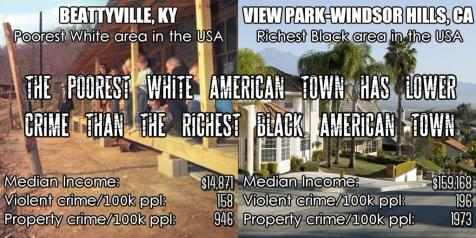 If you actually look at the census data for Park-Windsor Hills, an upscale black community in Los Angeles, California, it’s positioned directly next to Hyde Park, a lower class district with a high crime rate. Hyde Park had 309 violent crimes, including rape and murder, and 445 property crimes within the last six months, according to the LA Times.

The majority of the crimes that take place in Park-Windsor Hills involving violence are related to robbery and aggravated assault, many of the aggravated assaults take place on the edge of the district at Hyde Park, according to the crime report, while all of the property crimes – totaling 149 over a six month period, with burglaries and theft totaling more than 65% of property crimes – all involve stealing from the homes and cars situated within Park-Windsor Hills, according to the LA Times reports.

In essence, the data shows that the lower class blacks from Hyde Park regularly assault and steal from the rich blacks in Park-Windsor Hills.

Unfortunately, JonTron wasn’t informed about this and the media used it as a launch pad to call him a racist and white supremacist. 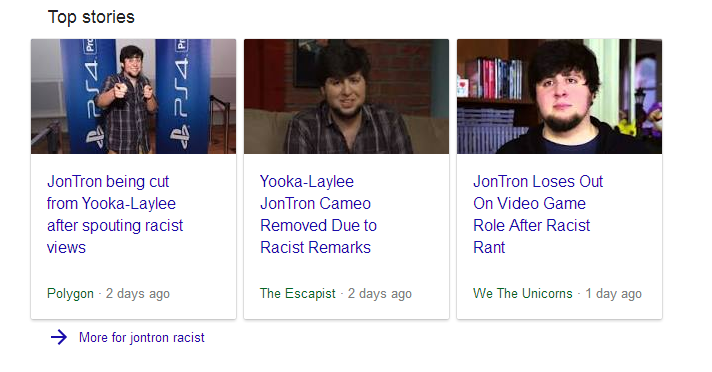 Many of JonTron fans and those who were neutral on the matter felt Playtonic took things a step too far by taking an action that politicized Yooka-Laylee, especially after JonTron posted an apology video.

In addition to announcing their distance from JonTron, the developers issued a statement about their commitment to diversity, and that they were removing him from the game. While many people were okay with the statement about Playtonic not condoning racism, they were not okay with JonTron being removed based on a misrepresentation of data.

While users, backers and gamers have been up in arms against Playtonic, JonTron has forgiven them and stated that he understands their position.

Unfortunate to see Playtonic remove me from Yooka Laylee, but I understand their decision. I wish them the best with their launch!

Meanwhile, Team17 and Playtonic have doubled down against backers, and people are now claiming that the game will turn out just like Mighty No. 9, which had a myriad of issues but saw its biggest fall when an admitted SJW community manager created bad blood between the community and the developer.

For the people who remain on the Steam forums, they’ve made it clear what message they’re currently sending to the developers.