The Entertainment Software Association released their 2017 study breaking down gaming demographics and market diversity. They outline percentages of different demographics and what some of the most popular games are. However, they also take an opportunity to very much muddy the stats by failing to clearly define the categories, how they reached their numbers and categorical inclusion for their overall figures.

For instance, the one stat that instantly stands out is an oftentimes repeated figure that shows that women over 18 game more than boys under 18. 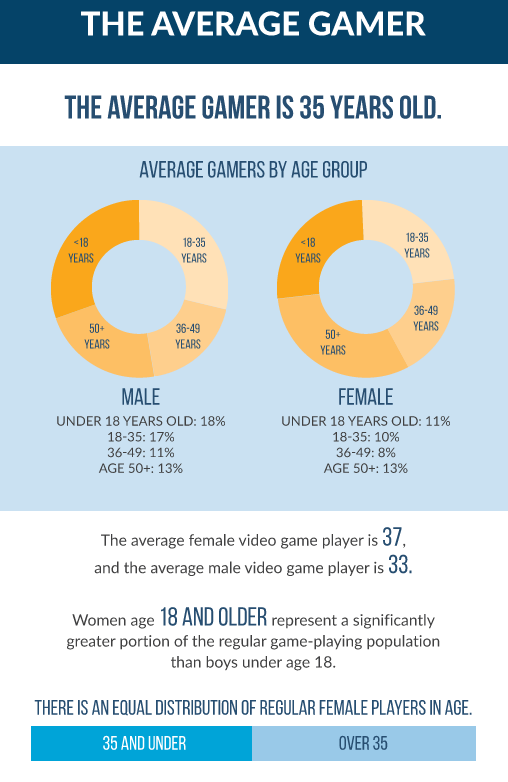 In fact, according to a 2017 study by Pew Research, 75% of women own a smartphone. In a separate study in 2015 Pew Research noted that 47% of smartphone owners used their phone for gaming. So nearly half of all smartphone owners in the U.S., game on their smart device. As noted in that NewZoo report, this would mean that female gamers playing on smart devices clock in at about 70 million. Quite naturally that would mean there’s a higher saturation of female gamers, generally speaking, in comparison to boys under 18.

The problem here is that the ESA report makes no effort whatsoever to breakdown:

It’s easy to take general stats and smear them on top of each other so that the figures say what the statisticians want the data to say.

Typically, as noted in market research reports – like the 2016 smartphone report by Ukom – more women spend more time with their smartphones than men. So in order to really look into that stat from the ESA, we would need a proper breakdown of usage per age group and gender. Otherwise, you could add everyone in there who may have played a game of checkers, chess, Candy Crush or Words With Friends to that category and it could easily look as if in general, more women play more games than men, which would be true, but also disingenuous in regards to actual market trends in the core gaming sector.

For instance, the ESA breaks down what the top best-selling games were from 2016, but fails to mention what the split is between gender and age groups, giving the false impression that males and females are buying all the games on the charts in equal measure. 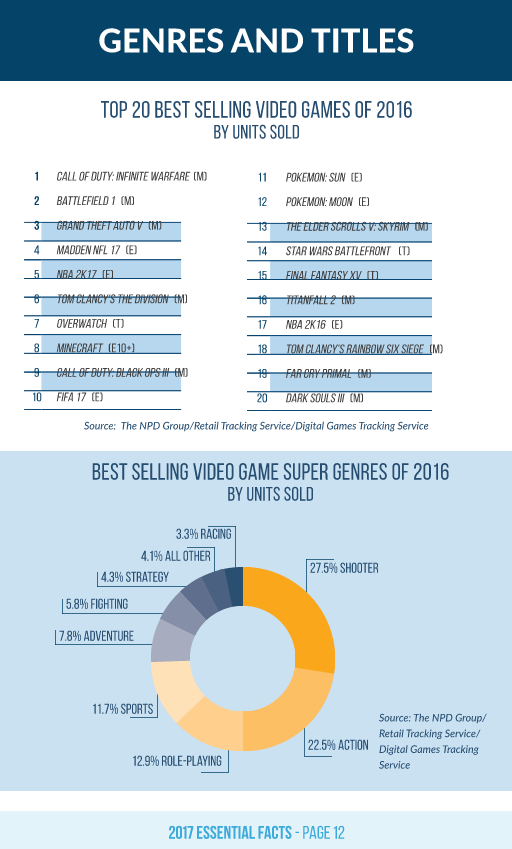 A lot of developers might assume they’ll have equal market breadth with their title by shaping it to fit a female demographic. This is something that Ubisoft tried with Assassin’s Creed: Syndicate, and it ended up being one of the worst selling entries in the series, as reported by IB Times.

We’ve seen a lot of recent action-oriented games now starring female leads in hopes of tapping into a female market demographic. However, as reported in a DeltaDNA research report, majority of females just aren’t interested in the same kind of blockbuster action titles as males. 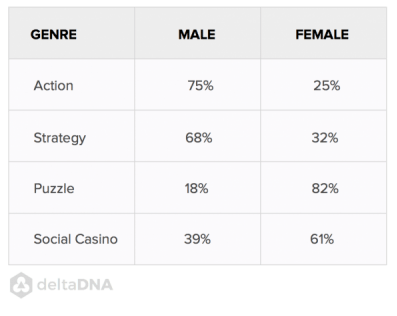 When the ESA puts out stats cross-pollinating the numbers to give the impression that all category of gamers are the same, it’s giving developers the wrong impression that their hardcore, violent, beat-’em-up action PvP game could sell just as well with the female audience as it does with males if they just replace the lead male with a female… right? 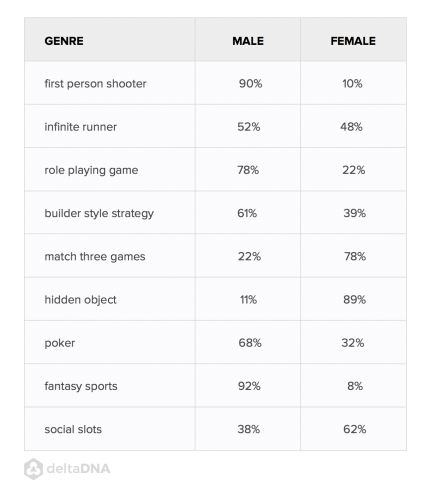 As the stats show, aiming games at a female audience in action categories seems fruitless, as proven with original action IP like Remember Me, Wet and Velvet Assassin failing to really take off, despite starring female and minority leads. This is not to say that developers shouldn’t make action games with female leads, but it is to say that it’s — on average — not going to attract a large female contingent.

This is also reflected in player bases for games like League of Legends and Dota 2, both of which have a healthy offering of female characters, but the stats appear to show that approximately 10% and only 4% of their respective player base are actually female players, according to a questionnaire and an LoL global reach report.

Alternatively, games like Kim Kardashian: Hollywood turned out to be a huge hit with – surprise, surprise – female mobile users. It was downloaded 42 million times and made $100 million in revenue over the course of two years via microtransactions, as reported by Fortune.

The stats for Kim Kardashian: Hollywood, a casual social sim, is identical to other socialite games and casual titles on mobile devices that actually attract large female audiences. As reported by M Dev, games like Bejeweled Blitz have a 78% majority female audience, along with the Candy Crush Saga games, which favors a 60% female audience. Keeping in line with the DeltaDNA statistics, the reports from AppData and NewZoo also reveal that PvP and FPS games like Clash of Clans and Call of Duty see higher percentages of male players. 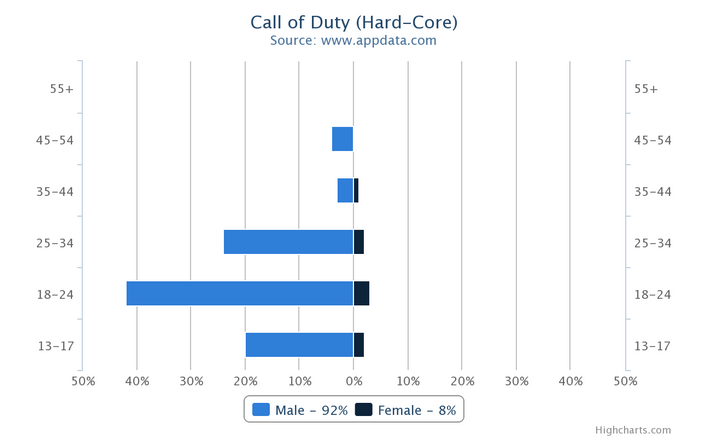 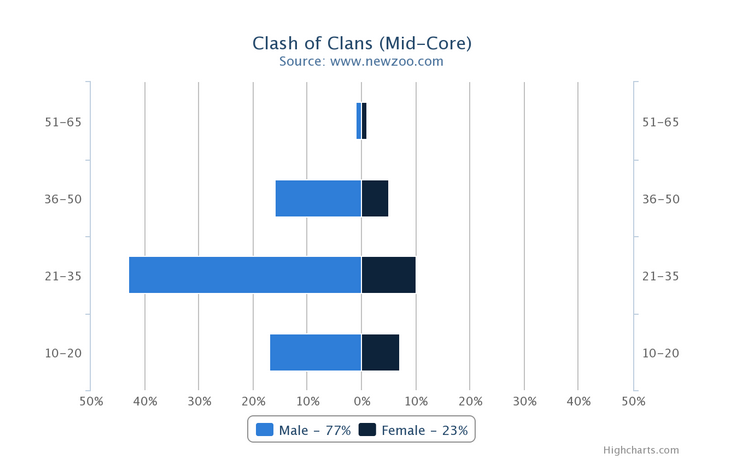 The data reveals that males and females just like different kinds of games, despite sharing a love for games. Muddied numbers that don’t properly breakdown the context behind figures, like in the ESA report, can be extremely misleading for developers looking for solid data on how to tweak their game or how they should construct their project for a specific demographic.

The ESA even managed to throw in some confusing figures based on game purchases, because they mention that majority of purchasers of games are males over 36…

…Yet they fail to distinguish if this is in relation to retail games, digital games, digital goods, apps, or mobile games. So are they saying that more men buy games but women play them in equal manner? Where does the mobile, browser and casual games fit into this? And does this have any overlap with the average usage data they touted earlier in the report?

Unfortunately the report is filled with questionable statistics and ill-defined numbers. Hopefully their next report will take time to properly outline and define each category.

(Thanks for the news tip Brad Glasgow)