Naughty Dog announced on their blog that Uncharted: The Lost Legacy – the first game in the series to not star or feature Nathan Drake in any way – will officially launch on August 22nd for $39.99 in North America. Canadians will have to take it up the bum without lube and pay an extra $10, so it costs $49.99 CAD.

The game is also scheduled to launch in Europe a day after the North Americans get it, starting August 23rd.

The game is still the typical third-person, action-platformer that the series is known for. Only this time around it stars former flame of Nate, Chloe.

She teams up with the untouchable mercenary leader from Uncharted 4, Nadine. A short cinematic was released not too long ago to give gamers a look at the high-tension relationship between the two.

Given that Naughty Dog has gone full SJW, it leaves me wondering which of the two female leads will turn out to be a lesbian? I doubt they’ll go for both, but it might be one or the other. I can see them making Chloe swing both ways, but Nadine sort of has that man-hating lesbian vibe going on about her.

Anyway, they’re expecting the game to clock in at around eight to ten hours, so that means you should expect a full-on gameplay experience at a fraction of the cost of a typical AAA title.

Then again, they’re essentially recycling a lot of stuff from Uncharted 4 and just making new levels and cinematics… and the cinematics would obviously be the most expensive and taxing thing about the upcoming title. 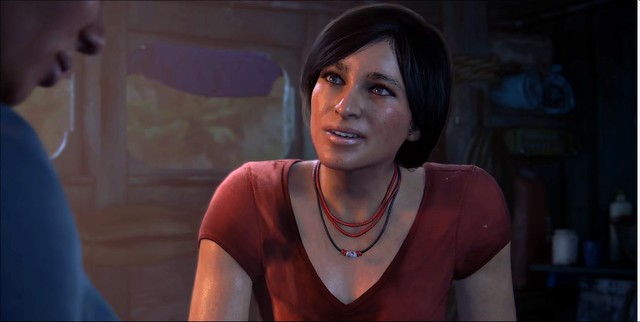 Hopefully the game is a lot more fun than the mundane and pared down Uncharted 4, which felt like a really boring and uninteresting take on Nate’s final adventure. I was expecting something hard-hitting and balls to the walls from start to finish as Nate and Sam found themselves in one ridiculous predicament after the other, but the game was nothing like that at all. It was a lot more drama-filled and restrained compared to what it should have been.

It’s a shame they canned Amy Hennig because there’s no doubt in my mind she would have had Nate’s final adventure go out with a walloping big bang, rather than a cinematic whimper.

Anyway, you can look for Uncharted: The Lost Legacy to launch on August 22nd, 2017 later this year for the PS4 and PS4 Pro.