BioWare’s newest project, their action-adventure online game, is being delayed to launch anywhere between April, 2018 and March, 2019. This was revealed during a conference call following Electronic Arts release of their Q4 2017 financials.

Gamespot quoted Electronic Arts’ CEO, Andrew Wilson, as to why BioWare’s new IP was being delayed, and he claims that it has nothing to do with the “mixed” reactions that Mass Effect: Andromeda received, saying…

“”The choice to move the new IP and what happened with Mass Effect [Andromeda]are completely unrelated. The reality is, we have a creative process–as a company, creativity and pioneering is really important for us. Innovation in games is important more now than ever, and as a leader in the industry, we see it as our responsibility to innovate.

“As part of our creative process–and I get to be involved in that creative process–we recognized that there was so much more opportunity in a connective, networked, social world to do some things in the new BioWare game that had never been done before, and [that] we don’t think anyone is going to do anytime soon. But by virtue of our network, our cross-platform presence, and our scale, we think we can do that. And we chose to give the team some more time to deliver against that innovation because we believe players are looking for the kinds of things that we plan to put into that game.”

My question is: where the heck was Wilson when Mass Effect: Andromeda was looking like trash during the development process if he’s so involved? How did he not see that the game had objectively worse visuals than Mass Effect 1 from a freaking decade ago? How do you miss that and say it’s okay?

And before fanboys run to BioWare’s defense.. yes, Mass Effect: Andromeda featured less shadow rendering, dynamic light shaders and even eye reflections in its initial release. All of those features were present at launch in Mass Effect 1, and there’s even a comparison video between the two to prove that Andromeda, a decade later, managed to come out looking worse than a game made 10 years prior. Check out the video from comparison from SaintSAM.

Anyone who has played a game in the last 15 years also knows that Andromeda had an extremely slow, boring and trite story. The script for the dialogue was amateurish and the entirely new galaxy that players explored in Andromeda looked less alien than anything featured in the original Mass Effect trilogy. That’s not to mention that the villains were forgettable, how Ryder became qualified for Pathfinder made no sense, and none of the crew members stood out as being particularly strong characters.

Wilson, however, defended Mass Effect: Andromeda, saying that despite the “mixed” reactions it was still an “interesting” title and that many players “found” what they were “looking for”…

“Mass Effect [Andromeda] is an interesting title; it was in development for a really long time and represented a lot of the great things that BioWare is known for: story, size, depth, breadth, imagination,”

“And while overall the aggregate review scores were lower than we would have liked, we did have over 100 reviewers score the game at 80 or higher. So it represents a fanbase that’s very passionate, that’s looking for very particular things, and many players found exactly what they’re looking for, and some players did not.”

The comment section on the Gamespot article basically trashes the game from top to bottom, with sprinklings of fanboys in between rushing in to defend the game. Most people comment that there are parts of Andromeda that just don’t hold up to the standards set by the original Mass Effect.

It’s not even in the comment section… it’s also on the YouTube videos and even on the forum discussion boards. There are the typical stragglers who come in to defend Andromeda, but it’s usually on the grounds that the game’s environments look fantastic… and there’s no arguing about it because they objectively do look fantastic. But good looking environments don’t make a game fun to play, and the user Metacritic scores actively reflect this. 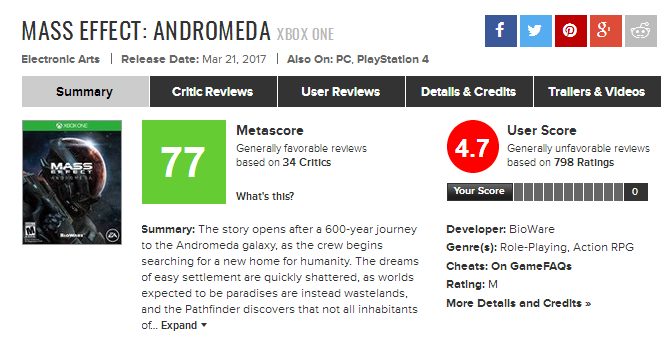 Wilson is definitely right that the professional scores are mixed, but the user scores tell a story where the majority are not pleased with the results at all.

It’s hard to separate the negative feedback from Andromeda – where a lot of people noted that the diversity hires included people working on parts of the game they weren’t qualified to handle, while others who were working on the game had an active SJW agenda – with the recent delay of BioWare’s newest IP.

The first thing that comes to mind is that EA is now actively overseeing quality control on the product to ensure that they don’t have another Andromeda on their hands. The delay feels like they want to spend some extra time in production to avoid the fallout that BioWare befell with their last outing.