#GamerGate alum and shitlord extraordinaire, Mark Kern, graduated from Red 5 Studios, Blizzard Entertainment, and working on various other projects in the gaming industry in order to start up a new idea called Em-8ER.

The game is a mecha game where players pilot giant mechanized robots and battle it out against giant kaiju, not unlike Guillermo del Toro’s Pacific Rim.

The story follows humans who end up as refugees on another planet after their home world is destroyed. There are obviously some alien monsters on the planet, kaiju, who are stuck in a time-loop and players have to figure out why, all while battling to keep their settlements safe.

There is an extremely impressive video demonstration of the game’s concept that’s up and available over on the IndieGoGo page. You can check it out below.

It looks like the kind of mech game I’ve always wanted to play; something where the mechs feel large and weighty and as if their presence has impact. It’s one of the biggest peeves I’ve always had with so many other mech titles out there.

The game combines a lot of Kern’s past experience with the ingenuity of unexplored territory in the world of MMO gaming. There’s the terraforming and resource gathering like in Firefall, but with the unexpected nature of the AI kaiju who can attack you while you’re out journeying with friends.

The game doesn’t rely solely on mech battles, though. You’ll also have smaller, personal exo-suits that can be deployed against the kaiju as well, effectively turning the game into a Monster Hunter-esque experience. 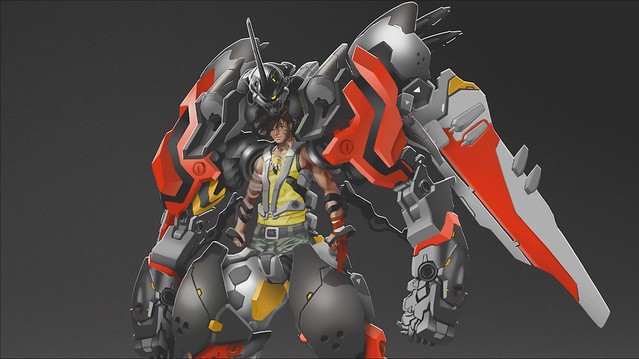 Research and tech trees will enable gamers to craft and build up their own bases, as well as upgrade the mechs, discover new weapons and unlock new abilities.

There will be melee combat against the kaiju, along with long-range projectile based combat as well. One of the things that they’re also working on if the IndieGoGo phase is successful is introducing modular weapon designs into the pipeline. At the end of the pitch video we get to see some really awesome looking weapons that the mechs might be able to carry with them into battle.

I absolutely adore the art-style. The weapons look so, so, so sexy. The animations for the mech also look superb. Again, there’s a lot of shifting mass and weight dispersion in the way the mech moves that gives it the impression that it’s a large, mechanical force to be reckoned with. I can’t wait to see more footage of the kaiju and what some of those sweet looking weapons look like rendered in the actual game.

You can check out more of the game over on the IndieGoGo page or pledge some funds if you’re feeling froggy. They have a fixed goal of $20,000 and they’re 85% complete with 15 days left to hit the goal.