Sony and Naughty Dog released a new cinematic trailer for The Last of Us: Part II. The trailer was aired with a hint of mystery because there were no logos or title screens at the beginning of the trailer, but the facial animation and high quality motion capture was pretty much a dead giveaway that it was the work of Naughty Dog, a place that was allegedly home to male sexual harassment.

Anyway, the trailer starts with a butch, muscly female being dragged in while her arms are bind in ropes. Some crazy cultist chick reveals herself after they string up the muscly female in a noose. Surrounding her are bodies hanging from the trees, lynched and gutted at the stomach.

You can check out the trailer below to see the cinematic sequence in action.

They then bring in an Asian chick and the cultist leader lady tells her two henchmen to clip her wings. They hold down the Asian chick – who almost looks like a boy – and they crack the bones in her elbow with a hammer… several times.

Before they can finish breaking her other arm one of the henchmen is killed by a boy with an arrow. The second henchmen is caught off guard by the Asian chick who uses her right arm to grab the hammer and jam the hammer in the dude’s neck.

The cultist leader ends up getting killed by snu-snu from the muscly chick’s thighs, because the muscly chick was still strung up and was able to use her legs to choke out the evil cultist chick. 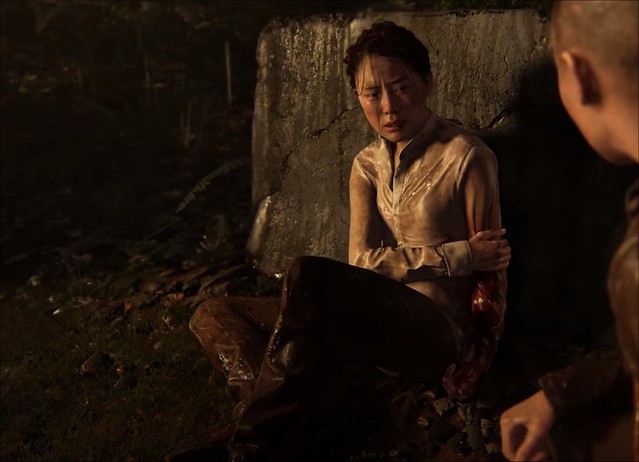 He manages to do so while warning them that the demons are coming.

We then get to see just how muscly the muscly chick is, looking almost like a small male wrestler than an actual female. She stands up so you can see just how manly looking her body is. In fact, upon first glance you would probably think it was a dude.

Anyway, the trailer ends with a muscle fetish cinematic shot of the muscly chick preparing for the vegetable zombies who are running towards them from the dark and foreboding forest that lies ahead.