Spintires: Mudrunner is a game I honestly never saw myself reviewing, or playing, or even, realising the existence of. I mean come on, this is a console game about driving massive, clunkytrucks through a variety of challenging environments in order to haul logs from one location to another. What’s even more surprising is that it’s actually quite good, assuming that you can get your head around the basic concept of what you’ll be doing for the foreseeable future each time you boot up your console.

Mudrunner definitely approaches things in a different way to most other games. It opens up with a tutorial that instructs players on how to drive the vehicles (which includes the need to do things like engage all wheel drive and lock the differential) but it also explains how some of the less traditional features come together. For example, vehicles can become entirely stuck in the mud, so the player can use a winch to drag them free. Each stage includes a number of vehicles by default, but the player may also change the default selection to suit them. It can often be useful to include support vehicles such as those which can repair or refuel the larger trucks, for example. 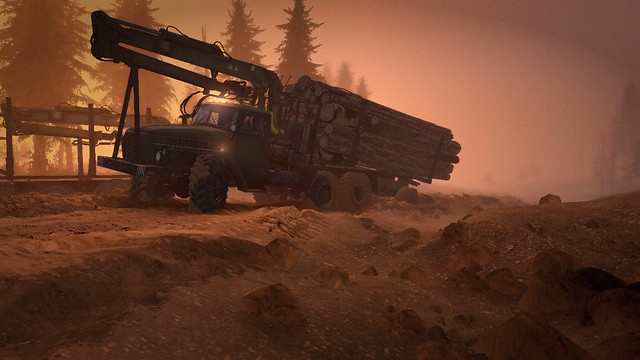 Aside from the brief tutorial, the game features nine challenge missions that act as specific lessons in how the game works. The first one, for example, is focused on how to manoeuvre a large rig with a long trailer on the back of it, which demonstrates how things like turning and reversing are affected. A later one one is a simple test of scaling a steep hill by following a narrow track, which tests low speed control. The main single player experience is based on completing a series of six progressively more challenging maps, each of which requires the player to achieve a fixed number of delivery points, earned by collecting and depositing logs around the map.

Using different vehicles for different things is one of the core concepts in Mudrunner, because some of the lighter vehicles are little or no use for towing trailers or transporting logs. Instead, such vehicles can be used to effectively scout the map, removing the “fog of war” by visiting watchtowers and revealing some of the more challenging areas that larger, heavier vehicles would simply get stuck in. 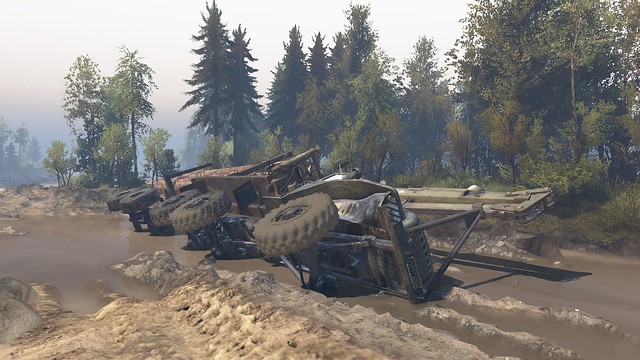 What is slightly weird (although effective) is the fact that the player doesn’t control an avatar that walks from one vehicle to the next, you simply use the camera to navigate and hop into nearby vehicles by using a menu of advanced controls. The game doesn’t use traditional camera angles, instead only providing a cockpit view and a floating “shoulder” camera that can be panned and rotated freely to highlight whatever you need to see. It’s effective, but very janky and there are situations where you won’t be able to get a satisfactory camera angle no matter how hard you try.

The terrain is certainly the star of the show in Mudrunner and I’ve never seen such detailed and changeable physics implemented in a game, let alone one made available for consoles. Small bogs present a minor challenge and demonstrably change the way that vehicles behave when passing through them, with even more variation when towing a large load. More expansive patches of mud or swampland really pose a challenge to some of the larger trucks, and often you’ll need to plan a way through or around them.

The game tends to provide multiple options to complete each objective, although experience through trial and error will lead you to the most efficient route by the later objectives, even if that doesn’t always make the outcome any easier to achieve. A standard approach to a new map is to use a smaller jeep to scout out the watchtowers, then plan the most effective route through the terrain based on which roads still remain and which rivers or swampy patches can be forded. 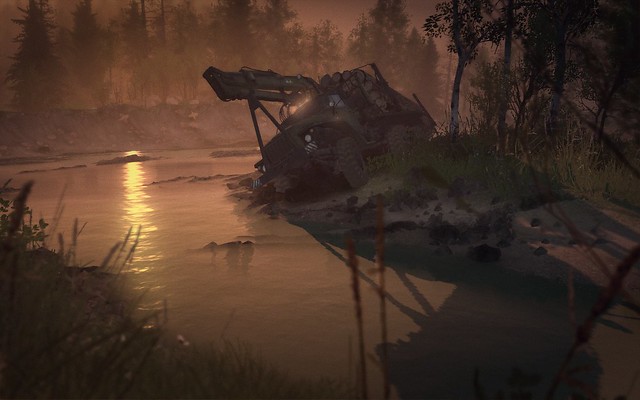 There are six large, sandbox style maps to work through, each of which (without actually measuring it) gets wetter and wetter and more and more challenging. By the last one, you’ll be driving through bodies of water that almost submerge your vehicle (even when you get it right) and irretrievably engulf them when you get it wrong. Similarly, as you progress through these maps (which are unlocked in any order through spending progression points) you will also gain access to more and more competent and specialised vehicles.

Completing each map takes at least a few hours, but the game does allow for continuing where you left off, so it’s not like you need to complete everything in one go. The challenges offer a more focused experience that can be completed quickly and each has three secondary objectives that make the challenge harder or more complex. There is a multiplayer mode, but sadly I wasn’t able to find a single other person online to play with, so I can’t say how that will pan out just yet.

Mudrunner is one of the most surprising games I’ve played all year. Part driving simulation, part physics simulator and part environmental puzzle, this is a game that has been polished to near perfection. The trucks look fantastic and the locations are wet, muddy and incredibly detailed, which really helps to create a sense of immersion – both metaphorically and sometimes literally – into the landscape. Whilst moving logs sounds like a boring concept, Mudrunner has a way of making it just challenging enough that it invokes real feelings of achievement, whilst having your last load teetering on the edge of disaster is genuinely nail-biting.  It doesn’t even feel niche – it’s simply one of the most original games I’ve played in years, so my recommendation is that you: