At times like this, I wonder what people want from a review. I’ve been playing Football Manager since it was conceived, but even before then, I still played it. I played it when it had a different name and came on floppy disk. I played it when Alan Shearer was a promising youngster and perennial wonderkid Freddy was still a babe in arms. I could tell you about how much things have changed since those early days – but what does that matter now, really?

Instead, I could simply tell you about what is new in this years edition by comparison to the previous one, but this isn’t a marketing pitch and you’ve probably read all about them anyway. Instead, I’m going to tell you about why Football Manager 2018 is the best version of this iconic series yet because of what it does well, but I’m also going to moan about all the others things that should have changed and haven’t.

Firstly, despite several outright new features and a raft of improvements upon those included throughout Football Manager games in the last three or four years, FM 2018 is more of an evolution than a revolution. It includes an apparently all new match engine, improvements to sports science, scouting and data analytics, a new Team Dynamics feature, a host of changes to the tactics screen and the options for match setup, team briefing and preparation.

There are new transfer options, new player roles, new staff roles and God knows what else I’ve missed or forgotten. As a returning player, there is a suitable feeling of newness to many of these features, yet of course the overall familiarity that all Football Manager games share is retained. I can’t imagine what a dizzying feeling it must be to enter this world completely cold, but I can say that the hints system is among the best out there, even teaching me a thing or two. As always, you can still delegate some (or all) of your responsibilities to another member of staff such as your Director of Football, Assistant Manager or the Coaching Staff either at the beginning of the game or via your Personal Assistant. These features (among others) remain largely unchanged, so much as I did with each Football Manager since the option to ignore the boring stuff was introduced a few years ago, I turned all of the assists off and dived in.

As always, the FM 2018 experience varies wildly depending on the club you choose. In my week or so with the game, I’ve sampled life at Paris St. Germain, Chelsea, Leeds United and Macclesfield Town, each of which brings its own challenge. At the bigger clubs, you’ll have ample support from backroom staff that you would hardly realise existed. PSG have an Under 18’s setup that dwarfs the entire staff at Leeds, whilst Macclesfield make do with fewer coach’s than you’d need to polish off a medium Domino’s.

Bigger clubs have other problems though. Managing astronomical wages and ridiculous wage demands is one of them, whilst maintaining the ego of prima-donna players has never been more of a pain in the arse. Following the bonkers transfer of Neymar this summer, Sports Interactive promised more chaotic transfer windows and they have certainly delivered. Perhaps unsurprisingly given the state of play, the fans are more demanding this year and the match day build up includes a more visible representation of the social feed stuff that began in FM 2016. Thankfully, whatever the size of your club, FM 2018 does a better job of letting you know what’s going on and how you can address it.

Keeping the player informed seems to be a theme throughout this years iteration and I must say, it is welcome. The first outright new feature is that of the inclusion of Team Dynamics. On this screen, players can see an informative, visual representation of the most influential players ranked by group, as well as which social groups have formed within the team. As an example, a captain of high ability that is respected by the players and speaks the common language is likely to have high influence, whilst a new player who is perhaps inexperienced and unknown to the playing staff will be lower in the pecking order. 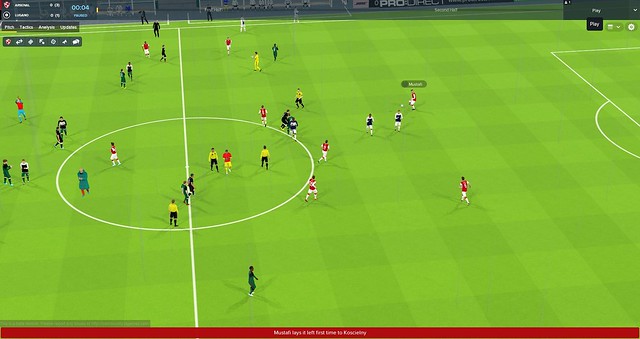 The social group view allows players to assess and understand which groups of players influence each other, for example because they were signed from the same club, speak the same language, are of similar age or joined the club at a similar time. Whilst I feel as if these social undercurrents were presents in the last few Football Manager games, it’s fantastic to be able to understand them at a summary level. It’s now possible, for example, to know more exactly who you will annoy by forcing a player out or fining them for bad behaviour.

Another powerful pair of features are the revamped tactics screen and the vast array of match day data that is now accessible. Saving and training players in how to use various formations and tactical setups has never been simpler, nor more powerful (although I do note that the Team Instructions are identical to those of the past few years, albeit presented in a more logical way.) At any time during a match, it’s possible to view where shots are coming from, which runs are working for (or against) your team and where balls are connecting. There are customisable heat-maps and statistics galore, all of which enable better decision making about player selection and substitution.

I should say that whilst I’ve never been that bothered about the match engine, the new one is much better. My game has an othrewordly shadow effect that appears to be a product of some weird bug, but the main thing is that players move much more realistically now and there are fewer anomolies. Most Football Manager veterans will have seen opposing players sliding across the pitch only to pass their defenders unopposed and score, or for players to be stuck out of position and seemingly suffer no performance drop in terms of statistics. I haven’t seen any such faults in FM 2018, but considering I usually rack up 400-500 hours of playtime each year, it’s early days yet.

So what hasn’t changed? Well, player interaction is much improved via prematch briefings and because of more optionality (and feedback) during Team Talks, but when dealing with players one on one, options remain limited and contextual prompts and responses remain very rare. Similarly, considering that you’ll need to deal with the press at least once per match (and often twice) it’s a shame that the options remain both boring, uneventful and in general, identical to those used over the past few years. Whilst information is provided about the trustworthiness and relationship level of the hack you’re dealing with, it never seems to matter a jot. There’s little else to fault, although where some might see the constantly changing scouting/player search feature as a great new feature, I find it a pain. Scouts report almost daily on players you aren’t interested in (and unless your scouts and analysts are top draw, about whom they know absolutely nothing) and whilst actually searching for a specific role, attribute or combination of skills is more powerful than ever, it is also more involved. Being able to assign a scouting focus for a short period is a nice feature and I suspect this raft of changes has been made in the spirit of realism, but on some occasions I wish I could just click “Player Search” and then filter by “Interested in joining the club.”

Training has been updated, but it remains functionally similar to Football Manager games of the past few years. I actually rarely involve myself in such matters following the first few hours of play, but everything I would expect to see is retained along with a few new tweaks. You can now do more in terms of match preparation to increase player familiarity and Training now links to multiple “off the shelf” strategies that you can save via the Tactics screen to increase the likelihood of your last ditch attempt to score being successful. It’s possible to customise and train set pieces once again and specific players really benefit from this approach if they have specific skills – for example tall players with high aerial ability do well from corners pitched to them at the back post.

Football Manager is the kind of series that makes other, extremely well rounded games look amateurish. In videogaming terms, each iteration is the very epitome of the word polished and FM 2018 is easily the most well rounded and refined iteration yet. It has no distinct faults to call out, yet it steadily resolves a number of the minor non-issues that we’ve been moaning about for years, whilst leaving enough back for next year. At the same time, it introduces a fairly generous range of new features that I didn’t know I wanted (but I’m glad someone else did) and naturally, it feels just as good as ever. If you’re a football fan, a returning fan or a curious fan, there is no doubt. You should: