NCSoft has announced that they will be shutting down Master X Master starting January 31st, 2018. The game hasn’t been in operation but for several months since June of this year, but NCSoft is already pulling the plug on the game like a gold digger pulling the plug on a rich husband in a coma.

GamesIndustry.biz is reporting that NCSoft has issued a statement about the shut down, where they said…

“Deciding to close the game is not a decision we come to lightly, but ultimately it came down to a matter of business – we explored several options, but none of them were sustainable,”

“We truly believe that MXM is special, and offered a lot of new ideas to change up the MOBA genre, but in trying to carve out a niche for itself, we failed to connect with players.”

The game was a typical MOBA title, with NCSoft hoping to compete against the likes of Heroes of the Storm and League of Legends.

While we didn’t hear much about the game since it hasn’t been out for long and a lot of people weren’t playing it (hence probably why it’s being shut down), the game did undergo censorship during its short run in the West.

If you go over to the main website and look through the profiles of the Masters, you’ll find that some of the characters were altered from their original designs. The giveaway is the original profile art compared to the updated concept art and character models. Lilu is a perfect example, where she’s wearing a Native American outfit in her original profile picture – a mini-skirt and bra with plenty of cleavage showing. All of her back is out save for a short jacket she’s wearing, as showcased below. In the original debut trailer profile for the character, which is in English but shows the Korean version’s design, you can see she’s wearing her original outfit as pictured in the profile pic above.

If you look at the updated profile picture for the character she’s covered practically from head to toe and her skirt has been swapped for shorts. The Western version of the character also reflects these changes in the game, with a far less risque outfit. The character V-Merang underwent the same sort of censorship. She was in a leotard not unlike the original Ms. Marvel. As you can see in the image below. Also, in her original profile reveal trailer (which featured the assets from the Korean version) you can clearly see that she’s in a one piece leotard.

In the Western release of the game that came out this June, V-Merang was put into a full bodysuit, covering up her bare thighs. They also updated the Western profile art to reflect the changes in censorship. 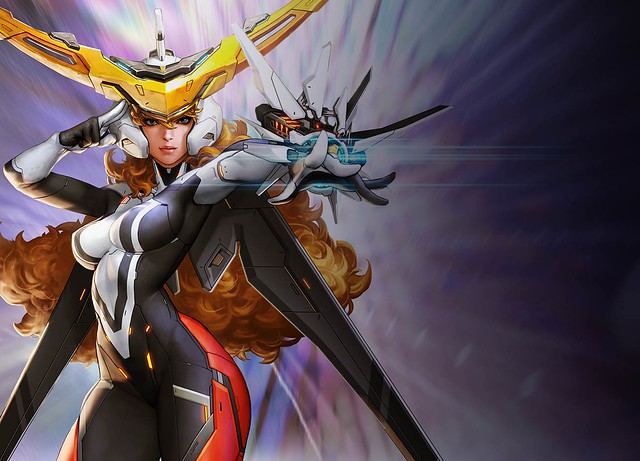 The censorship isn’t heavy, but it is noticeable. Some gamers noted these changes and were clearly disappointed. What’s odd is that some characters were censored more than others, which shows a stark level of inconsistency on NCSoft’s behalf.

Nexon and Cwavesoft did something similar with Hyper Universe, which was also censored in order not to offend those who found female cleavage “uncomfortable”. They were also unwilling to add an SJW toggle switch for those who wanted to play the game with the original artwork and boob physics. Even though they censored the game to reach a broader audience, they actually killed off what little audience they had.

NCSoft seems to be using the same playbook, given that even with the censorship of the characters, Master X Master did not reach a new audience, did not grow, and will now shut down at the end of January in 2018.

In this case, Master X Master‘s censorship likely flew under the radar because it just didn’t gather up enough players for them to make any demands for change. But it wouldn’t have matter anyway since NCSoft’s localizers also are Social Justice Warriors, and made unwanted changes to Blade & Soul in order to make the females more “empowered”, to reduce the sexiness of their outfits, and to change some quests around to be less “sexist”. When gamers attempted to complain about these issues, their e-mail campaigns to NCSoft to protest the censorship… were censored by the community managers.