Nutaku announced that both Armor Blitz and Pussy Saga are currently available for download for mobile devices… specifically, Android devices. Apple doesn’t allow married people who pay $1,000 for their phone to be sexually gratified by anyone other than a mistress. On the upside for Android users, it’s possible to get all the gratifying entertainment needs from the comfort of just five inches in your hand.

So first up is Pussy Saga, which is a resource management game with match-3 mechanics. The game plays out similar to new-school classics like HuniePop, complete with a variety of different lovely ladies you can woo and date while unlocking scandalous CG art. The game’s description basically sums up what you can expect from it…

“Meet bitches, take them on dates, and bring their holes to ecstasy! In return they will reveal to you their most cherished and intimate desires. You will immerse in the fantasy world of every broad and learn all of her secrets.”

You can grab Pussy Saga for free from the Nutaku store page. 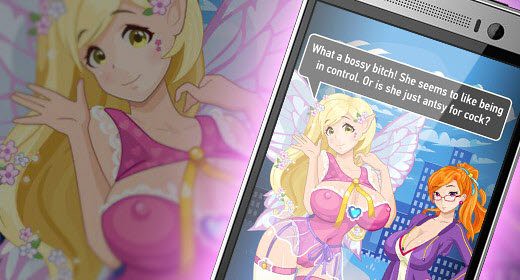 The second game in the line-up is Armor Blitz. This is a title about war after the ravaging of Valhalla. Gamers will gather their party and recruit troops in the afterlife as they attempt to strike back against an ever-growing force known as The Corruption.

Armor Blitz features a cast of female characters who embody the spirits of World War II-era tanks. Yes, it’s as ridiculous as it sounds, but it has its own charms, and a fairly infectious intro sequence.

The game has a collectible character element to it, as you attempt to bolster your troops and recruit more WWII waifus to your army.

The game mixes collectible card deckbuilding with real-time strategic combat. You can grab a copy of Armor Blitz for the Android from over on the Nutaku store page.