A Hat in Time Review: Bowler-ed Away

My review of A Hat in Time is somewhat delayed. Unusually, that’s not because I’ve been lazy (although I probably have) or because it’s stupidly hard (which it is occasionally) but mainly because it’s just so vast and varied that I felt compelled to see every corner of it. Except in the case of garbage like Hello Neighbor, which I refused to play to completion, I do tend to finish games before I review them, but I won’t always search out every nook and cranny.

I had to make an exception (to the extent that it was sensible and reasonable) for A Hat in Time because it is frankly crammed full of interesting distractions and collectibles, most of which remain fun and interesting to track down. As a basic concept, it is a 3D platformer that is cast almost directly in the Mario 64 mould, but aside from the basic control system and level structure that so many games emulate, A Hat in Time also channels much of the inventiveness that has made Mario games such a treat over the years. 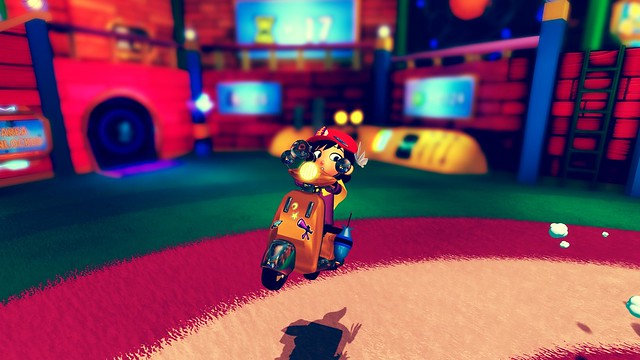 The first level, Mafia Town, is initially presented as a traditional, albeit somewhat busy equivalent of any other game. There’s literally tons to explore, from streets filled with moronic gangsters to a waterway that runs from the top of the town down to the dock below, which is filled with hazards such as cranes loading ships and similar. Within moments, you’ll meet Moustache Girl and Hat Girl (who the player controls throughout) must give chase across a number of obstacles. There are safes to unlock, balls of yarn to collect and new hats (that grant powers such as sprint) to unlock.

Hat Girl soon gains access to an umbrella swing attack as well as a flying superman punch, then more hats which unlock more skills. She’ll revisit Mafia Town several times, each time with the aim of collecting one of the forty hourglasses that power her ship. This a mechanic that works a lot like the stars in Mario 64, or even the moons in Mario Odyssey and it works in a very similar way. Some of the hourglasses are easy to find, whilst others require Hat Girl to defeat a boss in a puzzle or fight sequence that she hasn’t encountered before, but should be prepared for because of everything else that we’ve seen so far. 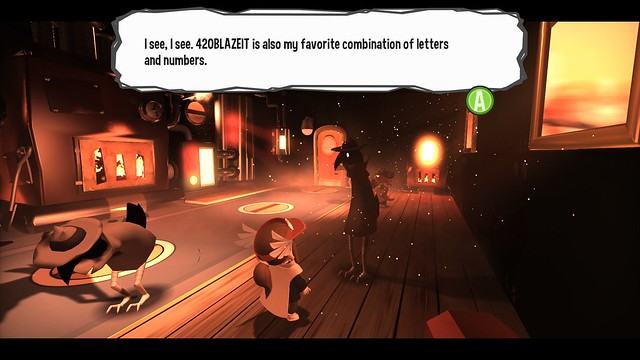 Mafia Town is just one example of how inventive A Hat in Time is, but what really proves the point is how it changes pace in other levels. One of my favorites is another level called Murder on The Owl Express which has Hat Girl running around to catch a murderer within a given time limit, including sneaking sequences and even, quite large sections that take place inside the train itself, where the platforming is restricted to close quarters but rarely hampered by the setting.

Another level in the same storyline has Hat Girl taking part in a movie sequence and performing different actions to increase the popularity of the movie she chooses to star in. Another has her following a DJ’s moves in the style of Parappa the Rapper. The sheer variety and the explosive combination of primary colours, cute design and catchy soundtrack combine to make the whole game feel as if it is constantly changing the rules in a good way. You really never know what you’ll see next. 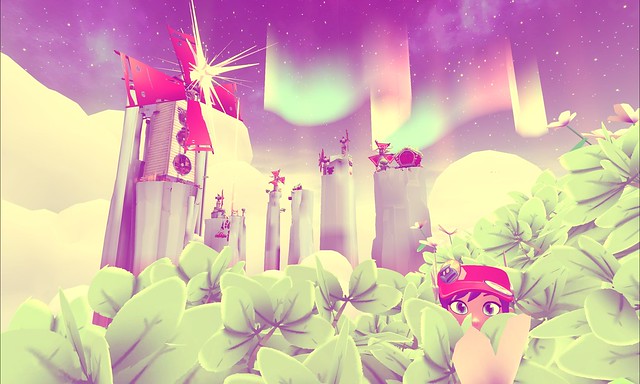 On the note of soundtrack and to a lesser extent story, A Hat in Time actually has a decent yarn to spin (both figuratively and literally) about Hat Girls time-powered spaceship and her need to collect those missing hourglasses. Many sequences are voiced throughout and where they are not, even the story elements delivered via text remain mostly interesting and often funny. This leads to some actual dialogue choices later on, including one memorable sequence that plays out a bit like a text based puzzle.

I was genuinely surprised by how competent A Hat in Time was and as a result I just wanted to keep playing. It has the same tight controls that make a good 3D platformer successful, as well as the variety and interest in world design that actually makes playing worthwhile. It still isn’t quite up there in the top tier of similar games, although I’m struggling to put my finger on why. I think perhaps changing hats and the added complexity of some of the mechanics adds to the slight doubt, because games like Mario and Banjo-Kazooie achieve the same despite having given players almost all of their protagonists arsenal very early on.

In any case, A Hat in TIme is good, in fact it’s very nearly great. It looks and sounds fab and for the most part it plays well and is packed with great ideas. It never fails to surprise you and even the core adventure weighs in fairly large at probably around eight or nine hours, whilst I could imagine you can add at least half as much again if you want to see and do everything. Without hesitation, you should:

No comments yet Categories: PC, PlayStation, PS4, Reviews, Xbox, Xbox One, Xbox Scorpio Tags: 3D Platformer, A Hat in Time, Gears For Breakfast, PC, PS4, Review, Xbox One
← Sicario 2 Trailer Shows What The Punisher Series Should Have Been About
ARK Aberration Guide: How To Find Gems, Charge Batteries And Make Zip-Line Motors →