The visual novel The Key to Home / いえのかぎ was originally accepted through Steam Direct after the developer, Katsudou Mangaya, submitted it through their publisher. The game received a store page and app portal in mid-November, 2017. However, the studio states that on December 5th, 2017, Valve later e-mailed them and stated that they could not allow The Key to Home / いえのかぎ because it would attract a core audience of pedophiles.

You’re unable to access the game’s store page from Google nor through a cache. It’s completely inaccessible. [Update: It appears the Korean version of the Steam store page still has a web cache available, which you can view here]

However, the Steam group Cut Content Police was informed about the game’s discussion page, which is still active, where publisher Henteko Doujin explained the situation in detail on a forum post that was published on December 9th, 2017…

“It is with a heavy heart that I must inform you all that “The Key to Home”(AppID:710370) has been deleted from the steam store by valve.

“Our game, “The Key to Home” was approved by Valve after passing through their game content reviewing process. Then on Dec 1st, we received an E-mail from Valve asking us to explain the game’s plot and to also specify its intended audience. Wanting to respond to them quickly, we hastily summarized the plot in Japanese and explained to them that the target audience is people concerned with the social problem of children and people who like children in general. We also told them our stance that if there were any questions, we would be ready to answer to them.

“However, four days later they responded with a very short E-mail stating simply “We are not interested in shipping this title on Steam”. Shortly after receiving this response, “The Key to Home”’s store page was deleted, and the payment we made to SteamDirect was returned.”

“After sending them numerous E-mails requesting a direct explanation as to why it was deleted, the response we finally got was essentially “(because)we think this novel’s core audience is pedophiles”.

“However, since that is the exact opposite message of this game, it is clear that their decision was based on an ill informed and misinterpreted understanding of its content.”

According to Katsuduo Mangaya’s publisher, Henteko Doujin, Valve may have misinterpreted the description of the game, which states “This is a mystery visual novel for every gentlemen and gentlewomen who love little girls!”. The reference is somewhat mistranslated from Japanese, with the intent supposedly being that these are men and women who love little girls in non-sexual ways.

However, Valve didn’t see it this way and have refused to further explain themselves after Henteko Doujin requested more details on why the game was barred from release on Steam, especially considering that it’s not an H-game and contains no H-scenes. Henteko Doujin stated in the thread…

“We have continually taken a strong stance AGAINST promoting crimes against children.
This stance of ours may already be obvious to those of you who read these discussion boards, but any users hinting at sexual acts with minors have been swiftly banned and we have also made it very clear to people that this title contains no sexually explicit images whatsoever.

“We have continually asked Valve to inform us of any specific issues that they have with us or this title, but as of this moment we have yet to receive any clear response.”

There isn’t a lot of info available on the visual novel, other than the snippets and handful of images from the Melon Books website. 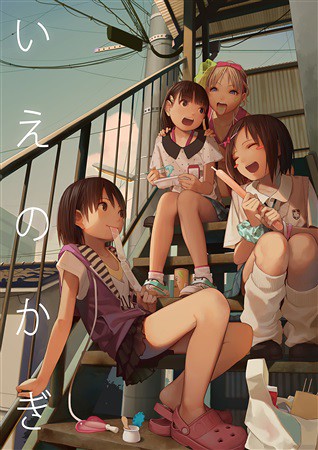 This is also unsurprising given that Valve regularly keeps communication limited, leaving a lot of developers to fish around for answers, especially when it comes to games being censored or banned from release.

Since then, Valve has been cracking down sexy-time games with extreme prejudice.

In this case, it seems as if Valve may have jumped the gun, or are taken extreme precautions. However, some pointed out that Valve did allow Hikari Field and Lose’s Monobeno on Steam, even though it, too, features loli characters, just like The Key to Home. Monobeno is due out for release in 2018, according to the Steam store page.

Unfortunately, unless Valve makes a public press statement we’ll never know exactly what parts of The Key to Home / いえのかぎ was something Valve thought would attract pedophiles. And given that we can no longer see what games are submitted since Steam Greenlight was shutdown in place of Steam Direct, Valve can basically ban or deny games from being released on Steam and we’ll never really know why.