[Update: The creative director, Brendan Greene, has apologized to SJWs and has vowed to remove the camel toe from PlayerUnknown’s Battlegrounds]

[Original article:] Every game will eventually succumb to the scrutiny of Social Justice Warriors. It’s one of those things that has become pervasive in today’s gaming industry. A lot of people take almost anything out of a game and attempt to perceive it as a slight or offense against them or whatever intersectional group they represent on the progressive stack. Well, that’s exactly what happened recently when SJWs caught wind of a post on Reddit that indicated that camel toes had been added to the female underwear in PlayerUnknown’s Battlegrounds.

The change was spotted on December 9th, 2017 as part of the test-server update for the game.

Users on the sub-Reddit were confused and mostly joked about the change. A few already knew what was coming.

On December 10th, 2017 a visual effects and character artists, Liz Edwards, who used to work for Creative Assembly spotted the change on Reddit, and made a tweet about it. Inevitably, the tweet began going viral among Social Justice Warriors.

Edwards extracted the normal map to get an even closer look, and then the tweets about getting Bluehole Studios, the developer, to censor the camel toe started sprouting up.

Hey @PLAYERUNKNOWN, how about you don’t do this? ^

Known Social Justice Warrior and indie game developer, Rami Ismail, was also quick to jump into the feed to virtue signal his displeasure at Bluehole adding sex appeal to the female form.

One of the users attempted to place the blame on Japan, but was quickly reprimanded by a Double Fine artist who placed the blame on the South Koreans, calling them “gross dudes”.

This is completely dumb. Bluehole is Korean, not Japanese. Many of their artists are American also. You think this is a “japanese people are creepy” thing? No. This is “gross dudes think it looks rad”

Some of the users begin using it as an opportunity to shill for Epic Games’ Fortnite, and how there are options to make SJW-friendly characters. Others disagreed because the women are still depicted as being conventionally attractive in Fortnite.

True, but all the female characters I’ve played as have ridiculously wide hips and tight pants that the male characters don’t have at all. PUBG is obv the bigger offender here, but Fortnite isn’t innocent.

The thread then devolves into attacking men, saying more women need to be in tech, and that Bluehole needs to oust artists who make women sexy in games.

What the?? Any dude that’s cool with this has A: never had a girlfriend in his life/possibly even met a woman, and B: Needs to work on a little thing called empathy. Well done for pointing this out Liz, it’s just ridiculous.

This is why we need more women in tech, jesus christ

There are a lot of good character artists looking for work, studios you don’t need to keep people who make stuff like this on board 😂😂😂😂

Yeah it’s a bummer, I brought it up on reddit, knowing it’ll just get downvoted, but ya gotta say something.

Some sites have already began covering the issue after thousands of people witnessed the tweet; and it seems to keep growing.

Nevertheless, despite the protests against adding such a feature, even Edwards had to admit that you can’t even see the camel toe from the main menu, and it’s practically invisible unless you zoom in.

It doesn’t look so bad off the main menu, but DANG that is a DEEP CRACK. Undies go right on up there, huh? pic.twitter.com/2xoUOEn6Lt 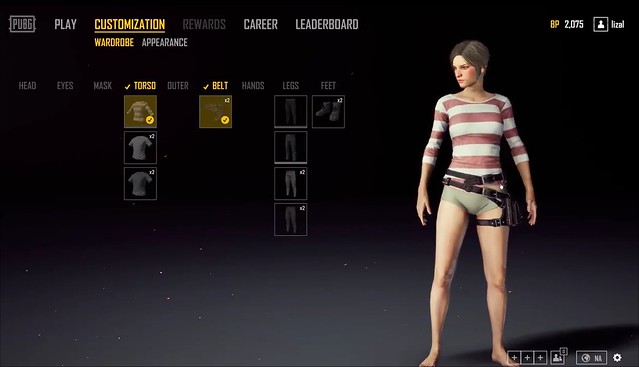 Another Twitter user also pointed out that even at 1440 resolution it’s practically impossible to see it. Edwards defended the findings, stating that it’s definitely visible if you rip the assets using Umodel and look at the normals through Blender. A brief video demonstration of the baked lighting maps and texture mesh was attached to the tweet. If you look closely and zoom in, the camel toe is partially visible under certain lighting conditions.

Dude, I ripped the game mesh and textures. Download UModel and Blender and rip it for yourself if you don’t believe me. pic.twitter.com/2Cmqs1DwqH

First of all: The average player wouldn’t never know about this feature and doesn’t care, since it doesn’t change any part of the gameplay.

Second of all: The only people who would notice are the people who are looking for it.

Thirdly: The only people who are looking for it are those who either appreciate camel toes or those looking to be offended by them.

And finally: PlayerUnknown’s Battlegrounds has sold more than 25 million copies, according to Steam Spy. That number will continue to skyrocket with the game officially launching in China. Bluehole would be smart to ignore the handful of people and their thousands of bot-retweets complaining about an infinitesimal artistic choice, especially when they’ll have millions upon millions of Chinese playing the game soon enough. It’s pretty obvious which market they should choose to ignore.